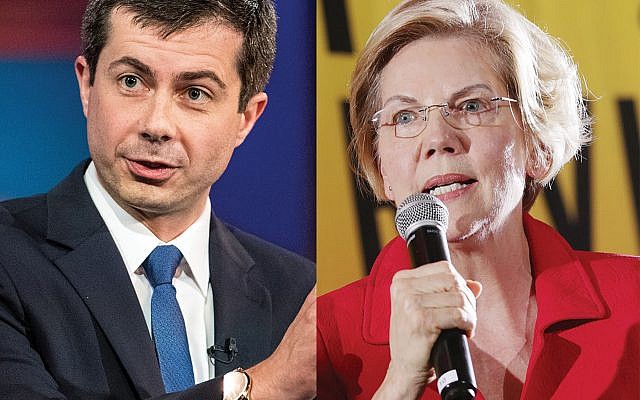 On May 23, Mayor Pete Buttigieg walked into a meeting with Jewish community leaders and political activists in Washington, D.C., and likened the U.S.-Israel relationship to a close friendship.

“The right approach when you have an ally or a friend that is taking steps that you think are harmful to you and to them, you put your arm around your friend and you try to guide them somewhere else,” Buttigieg said, according to NBC News.

Last week, Buttigieg, whose polling and fundraising numbers put him in the top tier of presidential hopefuls, staked out a more critical position. “If Prime Minister Netanyahu makes good on his promise to annex West Bank settlements, he should know that a President Buttigieg would take steps to ensure that American taxpayers won’t help foot the bill,” Buttigieg said in a speech at the University of Indiana in Bloomington.

Then, in an interview with Axios on HBO, the mayor of South Bend confirmed that he would not return the United States’ embassy in Israel to Tel Aviv, saying that “what’s done is done.”

On the eve of the first Democratic presidential primary debate in which 20 candidates will face off in two events next week, the question of how a Democratic president would approach the U.S.-Israel relationship is gaining new prominence. After two-and-a-half years of President Trump’s unprecedentedly cozy relationship with the Israeli prime minister and an Israeli government moving closer to annexing the West Bank, the U.S.-Israel relationship is poised to become a more salient issue within the Democratic Party than it has been in years. And the issue is emerging as the progressive base and moderate center battle for control of the party and the nomination, observers say.

Mark Mellman, a Democratic pollster and founder of the Democratic Majority for Israel, an organization whose mission is to promote the importance of a strong U.S.-Israel alliance within the Democratic Party, said the ties between Trump and Netanyahu has raised the stakes of the U.S.-Israel relationship for Democratic candidates.

“We are in a hyper-partisan era and the friend of your enemy is your enemy,” said Mellman. “There’s going to be debate about Netanyahu, there’s no doubt about it.”

Buttigieg isn’t the only candidate to opine on Trump’s relationship with Netanyahu or on the president’s policy shifts vis a vis Israel and the Palestinians. Earlier this month, Sens. Elizabeth Warren and Bernie Sanders, both of whom are running for the Democratic nomination and are popular among the party’s left-leaning members, introduced a resolution denouncing Israeli annexation of the West Bank. Netanyahu promised to explore annexation in the final days of Israel’s elections in April.

In the days before that election, Warren criticized Netanyahu on Twitter, saying the corruption charges against him were “serious and cut to the heart of a functioning democracy.” While campaigning in Iowa in April, former Texas Rep. Beto O’Rourke called Netanyahu a “racist” while simultaneously extolling the importance of the U.S.-Israel relationship.

Whether any of this talk of Israel, and frequent criticism of its prime minister, will impact the way Jewish voters consider their options remains to be seen.

Halie Soifer, executive director of the Jewish Democratic Council of America, pointed out that all of the current candidates for the nomination oppose the Boycott, Divestment, and Sanction movement against Israel, and blamed Republicans for the narrative of Democratic division over Israel. While JDCA will not endorse a candidate in the primary process, Soifer said it will work to turn out the Jewish vote once there is a nominee.

“We know that Jewish voters are overwhelmingly pro-Israel, but at the same time a majority of them are critical of at least some of the current Israeli government’s policies and that includes Netanyahu’s threat of annexation,” said Soifer. “And it’s important to remember that Congress controls aid and nobody is talking about that in Congress.”

Robert Wexler, a former Democratic Congressman from Florida and president of the Center for Middle East Peace, criticized some candidates for their criticism of Netanyahu on the campaign trail.

“It doesn’t help American-Israeli relations to score points criticizing Prime Minister Netanyahu; what helps is restoring a healthy equilibrium of bipartisanship,” said Wexler. “If the goal is to establish your progressive credentials, don’t do it on Israel’s back.”

Whether a candidate’s stance on Israel will determine whom Jewish voters choose is not yet clear. Another issue likely to weigh on the minds of Jewish voters is the increase in anti-Semitism in the United States.

“For Jews, Israel’s just a threshold issue,” said Steve Rabinowitz, president of Bluelight Strategies, a public relations firm in Washington, D.C. “You have to meet the threshold, but once you do it’s onto the domestic issues, beginning now with anti-Semitism but also with the whole breadbasket of domestic policy issues.”

With such a wide field of candidates, next week’s debate will be the first time that Jewish voters, much like other voters, will be meeting many of the candidates. Like Buttigieg and O’Rourke, many of the candidates in this election are less experienced than typical presidential hopefuls, a result of the new precedent set by President Barack Obama, a first-term senator from Illinois when he ran for president, and President Trump, who had no political experience when he ran.

The result is a wide field of candidates, many of whom are still largely unknown to the Jewish community and Jewish voters. “Most of the other candidates are somewhat newer and don’t come from major Jewish population centers, so they haven’t had the time to really build up a relationship with the national Jewish community,” said Mellman.

The most obvious exception, Mellman noted, is former Vice President Joe Biden. Having served in Washington as a senator for six terms before his eight years as vice president, Biden’s relationship with the Jewish community dates back decades. A poll conducted by Morning Consult from April 29 to May 5, just a few days after Biden officially announced his candidacy, showed him leading the pack in support among Jewish voters, with 47.1 percent of Jewish registered voters preferring Biden followed by 11.1 percent for Bernie Sanders, 8.9 percent for Elizabeth Warren, 8.2 percent for Kamala Harris, and 7.3 percent for Pete Buttigieg.

“The fact that the vast majority of Jewish Americans are comfortable with Joe Biden is not a coincidence. That is a comfort that has developed over decades,” said Wexler. “He deeply profoundly cares about the welfare of the American Jewish community and the American-Israeli unbreakable bond. That bond is core to who Joe Biden is.”

“He’s a known commodity … he’s managed to touch the bases,” said Rabinowitz. “For most of the other candidates they only have pockets, they have their local [Jewish] communities.”

“Obviously there will be Jewish supporters in almost all the Democratic campaigns and that’s a very healthy dynamic, just like there are many Jewish supporters of President Trump,” said Wexler. “But I think Vice President Biden will enjoy the vast majority of support; not just donors, but voters.”