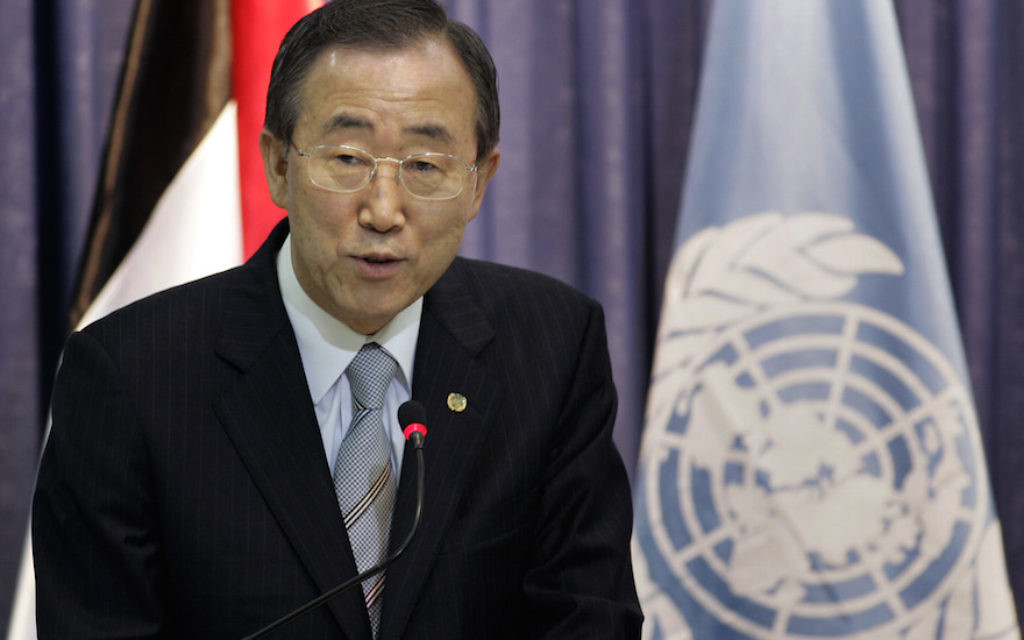 Jerusalem – UN Secretary-General Ban Ki-Moon arrived in Israel Tuesday to tamp down the current wave of violence and was told by Israeli Prime Minister Benjamin Netanyahu that Palestinian President Mahmoud Abbas is to blame for causing the unrest.

“Unfortunately [he] has been fanning the flames,” Netanyahu said at a joint press conference with Ban. “He said on September 16, just a few days ago, that he welcomes `every drop of blood spilled in Jerusalem.’ That’s a quote. President Abbas has not condemned a single one of the 30 terrorist attacks in Israel over the last month. And he continues to glorify terrorists as heroes.”

By his actions, Netanyahu added, Abbas is “joining ISIS and Hamas in claiming that Israel threatens the al-Aqsa mosque.”

Israel’s ambassador to the United Nations, Danny Danon, who assumed the position last week, also arrived in Israel on Tuesday to attend Ban’s meeting with Netanyahu.

Late Sunday, Ban released a video in order to “speak directly” to the Israeli and Palestinian people “about the dangerous escalation in violence across the occupied Palestinian territory and Israel, especially in Jerusalem.”

“I am dismayed – as we all should be – when I see young people, children, picking up weapons and seeking to kill,” he said in the video message. “Violence will only undermine the legitimate Palestinian aspirations for statehood and the longing of Israelis for security.”

In comments addressed to the Palestinian youth, Ban said: “I know your hopes for peace have been dashed countless times. You are angry at the continued occupation and expansion of settlements. Many of you are disappointed in your leaders and in us, the international community, because of our inability to end this conflict.”

To the Israelis he said: “When children are afraid to go to school, when anyone on the street is a potential victim, security is rightly your immediate priority. But walls, checkpoints, harsh responses by the security forces and house demolitions cannot sustain the peace and safety that you need and must have.”

In a statement issued before he left for Israel, Danon said he hoped that Ban would “unequivocally condemn the incitement to violence of the Palestinian Authority.”

He said he would immediately return to New York for a U.N. Security Council meeting on the current wave of violence scheduled for Thursday.