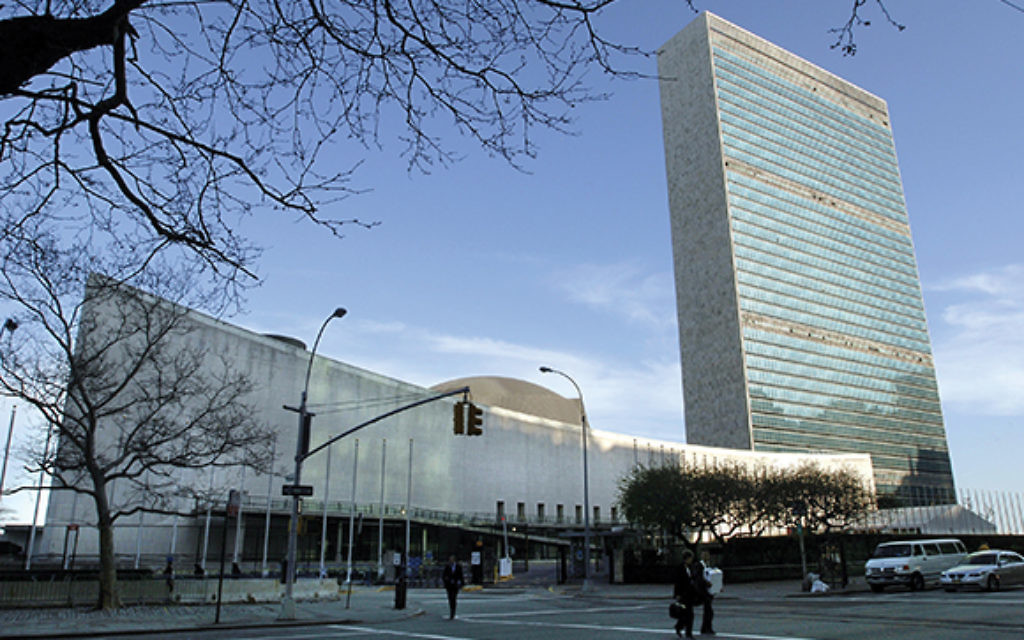 There’s a kind of parlor game in pro-Israel circles, one usually accompanied by a player’s roll of the eyes or knowing sigh: How unfair to Israel can the United Nations be?

Of course, there’s the infamous “Zionism Equals Racism” declaration from 1975. Then there’s the fact that Israel continues to be effectively barred from membership on the U.N. Human Rights Council in Geneva, a prestigious body that monitors human rights around the world. And last summer there was the U.N.’s claim that Israeli troops deliberately targeted both Palestinian civilians and U.N. facilities during the conflict with Hamas in Gaza.

Now, on the eve of the annual gathering of world leaders for the U.N. General Assembly and smack in the middle of the High Holy Days, Jewish leaders are saying the world body came up with another doozy. This time, it couldn’t even bring itself to use the term favored by Jews to refer to the area housing the Western Wall and the Al-Aqsa Mosque.

The U.N. Security Council issued a statement last Thursday expressing “grave concern regarding escalating tensions in Jerusalem, especially surrounding the Haram al-Sharif compound, including recent clashes in and around the site.” It went on to call for “restraint, refraining from provocative actions and rhetoric and upholding unchanged the historic status quo at the Haram al-Sharif — in word and in practice.” It added that Muslims “must be allowed to worship in peace, free from violence, threats and provocations.”

The one-sided statement was too much for several Jewish groups.

The Conference of Presidents of Major American Jewish Organizations said it was “unacceptable” that members of the Security Council “continue to lend themselves to the denial and denigration of the Jewish connection to its holiest site as well as the historic associations of Christians to the Temple Mount. The Security Council statement refers to The Temple Mount only as Haram Al-Sharif, the Islamic name for the site, and calls for the ‘restoration of calm’ and ‘full respect’ of the sacred site without indicating that the violence was organized and initiated by Palestinians.”

The Anti-Defamation League condemned the council’s decision to “ignore the holiness of the site to Jews,” and it said it had “turned a blind eye” to Muslim violence and the anti-Semitic invective from Palestinian Authority President Mahmoud Abbas.

It was referring to Abbas’ claim earlier this month that “Al-Aqsa is ours and so is the Church of the Holy Sepulchre. They have no right to desecrate them with their filthy feet. We won’t allow them to do so and we will do whatever we can to defend Jerusalem.”

Farley Weiss, president of the National Council of Young Israel, termed the Security Council statement “unconscionable” for failing to “distinguish between those perpetrating the violence and Israel’s efforts to end the violence.”

And the beat goes on to beat back the Israel detractors on First Avenue.