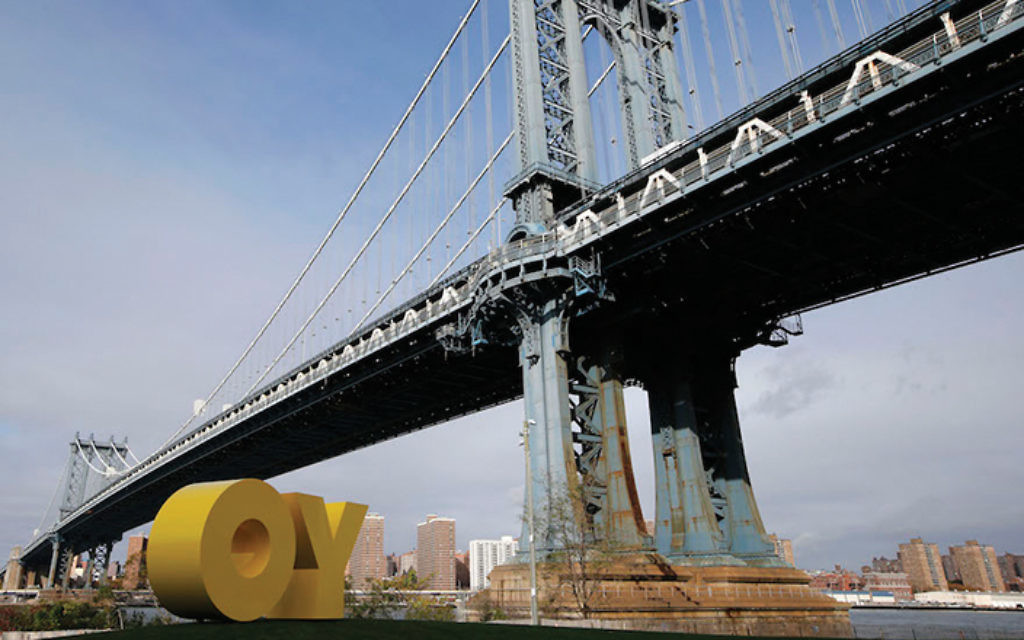 The march will cross over the Brooklyn Bridge.

It’s not a road sign between Brooklyn and Manhattan, but it definitely is a symbol — of New York City’s diversity.

An 8-by-17-by-5-foot, bright yellow aluminum sculpture by Brooklyn sculptor Deborah Kass was placed last week in a fenced-off section of Brooklyn Bridge Park at the foot of the Manhattan Bridge, near the East River that separates the two boroughs.

From Manhattan, the two letters spell out “YO”: from the Brooklyn side, “OY.”

Oy, of course, is the Yiddish expression of exasperation; yo, Spanish for I, is common street-slang in Brooklyn and other urban areas, used as a salutation or to warn someone to pay attention (“Yo, you almost stepped on my foot.”)

“It’s a sculpture for all the boroughs,” San Antonio-born, “total, absolute, 100 percent provincial New Yorker” Kass told the artnet.com website. “It’s about so many communities coming together.”

Kass said “OY/YO,” commissioned by the Brooklyn-based developer Two Trees Management Company, “resonates so beautifully in so many languages,” and was inspired by Edward Ruscha’s 1962 “OOF” poster, which features a similar font. It’s in the spirit of the “Leaving Brooklyn: Oy vey!” sign at the Williamsburg Bridge and the “Leaving Brooklyn: Fuhgeddabout it” sign on the Brooklyn-Queens Expressway that warned drivers that they were headed out of the outer borough.

“‘OY/YO’ will be a stunning addition to the waterfront,” Lisa Kim, Two Trees’ cultural affairs director, told the Brooklyn Eagle.

The works of Kass, who studied at Carnegie-Mellon University and the Art Students League of New York, have been exhibited, among several venues in the United States and overseas, in the Museum of Modern Art and the Jewish Museum here, and are now on display at the Paul Kasmin Gallery in Manhattan.

“OY/YO” will remain in Brooklyn until August.

Wordsmiths will point out that Australians have their own expression, “oi,” pronounced the same as the Jewish word; the Down Under version, usually part of an “oi, oi, oi” chant that follows shouts of “Aussie, Aussie, Aussie!” is most common at sporting events like rugby and Australian Rules football games.

How about an “OI/IO” sculpture?

Io refers, in alternate usages, to the chemical element ionium, a small hawk, a maiden seduced by Zeus in Greek mythology or the closest of Jupiter’s moons.

It doesn’t have the same ring as OY/YO.