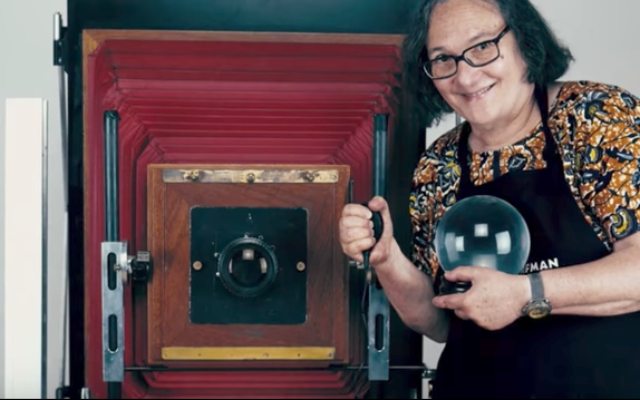 Deep-dish metaphysics is not what one usually expects from documentary film. The genre’s insights tend to pitch at a slightly more practical level, the result of the concrete nature of the film image with its affinities with the real world. So it comes as a small but pleasant surprise that two of my favorite films of the summer thus far are nonfiction works that, for all their rootedness in the contemporary, partake of questions of mortality and the passage of time and do so in a very Jewish tone. Not coincidentally, the filmmakers are both Jewish and, in the case of Errol Morris’ new film, “The B-Side: Elsa Dorfman’s Portrait Photography,” so is the subject.

Towards the end of “The B-Side” there is a shot that encapsulates one of the film’s central themes. Dorfman, a spritely 80-something, is the great pioneer of large format Polaroid photography, specializing in portraits of both the famous and the ordinary — solo, in groups and en famille. The prints are huge, 20 inches wide and 24 inches high. To store them, Dorfman has them laid out flat in large file drawers, sorted chronologically. In the shot in question, Morris’ camera slowly rises up one of these file cabinets, the dates on the drawers moving forward in time. His inexorable camera movement reminds us that the passage of time is inescapable. All we can do is watch. Suddenly, a drawer opens and we see framed in it the dancing eyes of Dorfman.

Later, Dorfman smiles sweetly at Morris and says, “Maybe that’s when these photos have their ultimate meaning, when the person [in the photo] dies.” The observation is offered casually, but it underlines the meaning of that earlier shot. Time passes slowly, ineluctably. We can document that passage and while it doesn’t alter the approach of death, it provides some kind of comfort. As Dorfman says of a portrait of her parents, “Now they look young.”

Age and the deteriorations that accompany it are at the heart of “The B-Side.” Not only are many of the subjects of Dorfman’s photography dead — her friend of 50 years, Allen Ginsberg, her parents — but the medium in which she excelled, the large-format Polaroid, has almost ceased to exist as well. Morris — like Dorfman herself — documents these passages adroitly. Dorfman is a charmer, a self-described “lucky little Jewish girl who got out [of the suburbs and entombment in a conventional marriage] by the skin of my teeth.”

“In Transit” is Albert Maysles’ last film, made in 2015 but receiving its theatrical debut now.  At a modest 76 minutes it is brisk, yet expansive, and as befits a valedictory work, contemplative. Co-directed with Nelson Walker, Lynn True, David Usui and Ben Wu, the film is a distillation of a trip on the Empire Builder, American’s busiest long-distance train route as it goes between Chicago, Portland, Ore., Seattle, and vice versa.

This part of the Northern Plains States was transformed by the recent oil boom in the Dakotas, and the fleeting impact of that economic upturn is one of the central realities of the film. A pleasant 21-year-old says, “I figure seven years in the oilfield (and) I’ll be set for life.” The oil workers seem a likable if bibulous bunch, and they blend in nicely with the train’s fascinating mix of working-class commuters, kids on college break and people seeking something more. There is a perky, very pregnant young woman who is heading home to Minneapolis with the baby four days overdue, an older woman who has just been reunited with the daughter she gave up for adoption nearly a half-century earlier and a church elder who knew Martin Luther King; the latter has a wonderfully calm and earnest talk with a troubled younger man, telling him, “You’re having this conversation on a train with somebody … so that you can have a conversation, perhaps on a train, with someone else who needs to talk.”

Superficially, with its intercutting of the bleak but beautiful winterscape of the Great Plains and the gentle procession of day-into-night-into-day, the film looks like a cousin of one of Frederick Wiseman’s epic examinations of democratic institutions. But Wiseman takes a long view, placing his subjects in an expansive chronological framework even in his films that are set over a single day, giving his attention to the big-picture interaction of these people in a larger sociopolitical context. By contrast, Maysles and his collaborators are actually distilling the essence of the passing of time, focusing on intimate moments between strangers in a celebration of our mutual humanity.