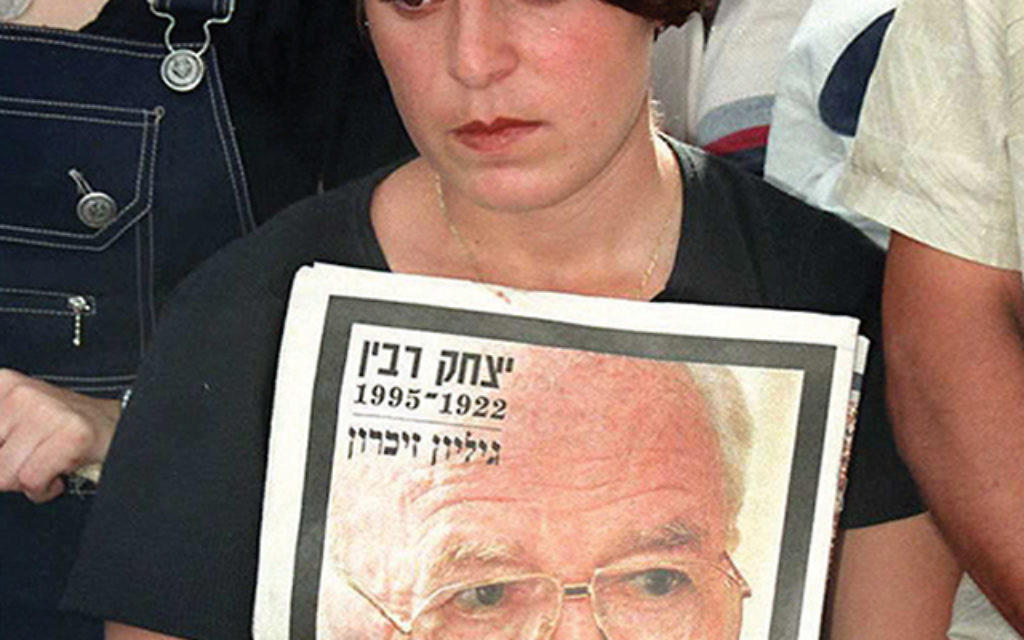 Jerusalem — Twenty years after Yigal Amir, a far-right-wing religious nationalist and law student, gunned down Prime Minister Yitzchak Rabin at a Tel Aviv peace rally, members of Israel’s peace camp still wonder what might have been.

This week, Hadag Nahash, the popular Israeli hip-hop band, released a new song to commemorate the assassination, which Israelis are marking this week with memorials, lectures and a Saturday night rally in the Tel Aviv square named in his memory.

The song, “What Would Have Been If,” released in collaboration with the Yitzhak Rabin Center during the latest wave of Palestinian terror, addresses the nation’s collective exhaustion and unfulfilled yearning for peace.

“But you should know,” the group sings, as if addressing the slain leader directly in a song with a mournful yet soulful, almost gospel feeling, “that there are moments / When I see high above the Cypress trees / And above the heads of my exhausted people / A bubble floats and inside three words: ‘What would have been if.’” (In Hebrew, the phrase is said in three words.)

Yariv Oppenheimer, director general of Peace Now, told The Jewish Week he often asks himself “What if?” It’s a question, of course, that has been
asked about Presidents Abraham Lincoln and John F. Kennedy.

“I wonder, first of all, about Israel’s character had this horrible event not taken place,” Oppenheimer said. “I think we would be a much less violent, more democratic society. I believe there would be a feeling of unity. I honestly believe there would have been a good chance to conclude the peace process and achieve peace with our neighbors. I would hope Israel would be the place we all dreamed it could be.”

The assassination, Oppenheimer said, had a “chilling effect” on the peace camp so strong that, to this day, leftists are less vocal than they used to be.

“The political climate is much less tolerant and people, including decision-makers, have the feeling that if you say something others don’t like, you could be killed for it. Rabin’s murder crossed a societal line we never thought would be crossed.”

Oppenheimer believes that, if Rabin had lived, he would have beaten Netanyahu during the 1996 election.

“If Shimon Peres was nearly able to beat Netanyahu, Rabin, who was at the height of his career, could have. He’s still remembered as a general, the man people thought could bring peace with security.”

Yet, notes Seth Frantzman this week in the Jerusalem Post, surveys in Israel continually show that Israelis are losing touch with Rabin’s legacy. A recent Maariv poll revealed that only 65 percent of respondents thought Yigal Amir killed Rabin. Other data shows large segments of the population pay no heed to Rabin. Former Knesset member and commentator Yossi Sarid claims that this is part of the “second assassination” of Rabin, his being forgotten.

“It isn’t effective enough, but it’s not dead,” he said. “It’s still fighting.” But he acknowledged that it has yet to find a leader with the military and diplomatic credentials “who can make ‘Peace with Security’ not sound naïve.”

Rightists say the political left may be alive but it’s hardly kicking. The “peace” rallies it has held around the country over the past couple of weeks, often in conjunction with moderate Israeli Arabs to denounce both terror and xenophobia, have attracted perhaps 20,000 people in total.

Knesset member Stav Shaffir, an outspoken member of the Zionist Union Party, believes the low turnout doesn’t reflect the real status of the left and center-left. What it does reflect, she said, is a woeful lack of coordination.

“If you add up all the left and center-left parties, from Meretz to Kulanu, you’ll see we have more support than the right-wing parties,” Shaffir told The Jewish Week. “The problem is that the two-state camp supporters aren’t united. If we really want a solution to the conflict, we have to replace the government with a government that is both pragmatic and pro-solution and not one full of fear and despair. I believe we can do that.”

Gerald Steinberg, a Bar-Ilan University political scientist, believes the center-right is on the rise for the first time in a long time.

“This was the best showing they’ve had in an election in years,” he said of the March 2015 election the Likud Party won, but not by a landslide. “The center-left is growing and it wouldn’t surprise me if there was a Herzog-Netanyahu government in the next few months,” Steinberg said, referring to opposition leader Isaac Herzog and Prime Minister Benjamin Netanyahu.

Steinberg said Herzog, who heads the Zionist Union, sees himself as a centrist pragmatist much like Rabin. Many Israelis see him that way as well, he added.

“Herzog and other centrist leaders are seen as a realistic alternative to the more fringe right wing dominating the Likud,” he said. “Herzog and the left realize they can’t force a peace plan that most Israelis consider unrealistic.”

“Netanyahu has taken steps among his constituency considered moderate and influenced by the left. Declaring there can be no Jewish prayer on the Temple Mount is just one example. The differences between him and Herzog on Iran are related to style, not substance.”

The challenge for Herzog, Steinberg said, is to resist calls from the “radical left” to push for a Palestinian state.

“At the moment the majority of Israelis fear a return of Oslo and other failures,” he said. “If being left is seen as promoting an unrealistic peace it won’t succeed.”

Oppenheimer from Peace Now acknowledged that when Rabin and the left were supporting the Oslo Accords 20 years ago, they failed to recognize the genuine fear many Israelis felt over the prospect of arming Palestinian police and relinquishing land to the Palestinians.

Should the peace camp once again have the chance to push for a viable peace process, “I would respect much more the needs of the public to feel secure,” he said.

That chance, say most Israelis, seems like a distant one. As if to sum up the country’s somber mood as it struggles through the latest spate of terror attacks, Hadag Nahash sings, “The present is known with no need to expand / How it drains and shakes how it pressures with no quiet … / And our untrustworthy future what does it have in store / What more can it bury.”

And yet a hope, however distant, survives. The band concludes …