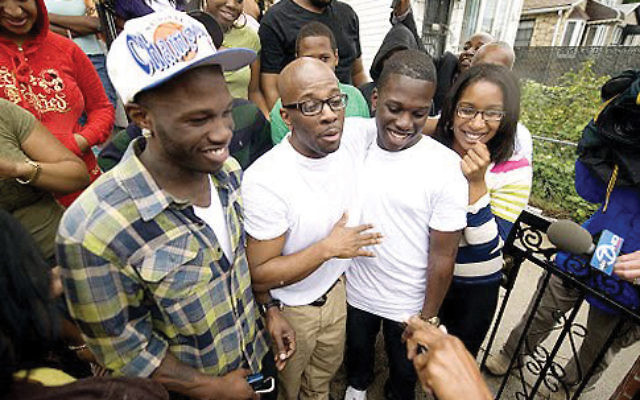 Nearly 20 years after the murder of Abraham Pollack, a beloved chasidic landlord, in Williamsburg, one of the slain man’s relatives is sharing a long-held belief that the man convicted of the crime, Jabbar Collins, is innocent. And the relative is charging that the Brooklyn district attorney, Charles Hynes, denied the family justice by failing to apprehend the real killer.

Collins, who served 15 years of a 33-year-to-life sentence, was freed in 2010 after a federal judge vacated his conviction amid allegations of prosecutorial misconduct. He is currently suing the city for $150 million. Despite Collins’ release, Hynes has maintained his guilt and insisted repeatedly that his office did not commit any misconduct.

The lawsuit — as well as the recent release of another man, David Ranta, wrongfully convicted in 1991 of murdering a revered chasidic rabbi — has brought the decades’-old Pollack murder back into the media spotlight.

“There should be a new investigation, but it’s not going to happen,” the relative, who requested anonymity out of fear of publicly criticizing Hynes, told The Jewish Week. “Charles Hynes has more power than I have.”

The relative — who has recently become increasingly plagued by questions about the handling of the case and the identity of the real killer — has kept quiet until now because discussing the killing serves only to re-open very painful wounds.

“I start thinking about it and I cannot work,” the relative explained. “[Abraham Pollack] is not coming back. That’s the bottom line. That is the reason we don’t talk about it. The more we talk about it, it is a shock to our body. It hurts. It doesn’t go away. It will never go away.”

On a Sunday in early February of 1994, Abraham Pollack, a 35-year-old married father of nine, was shot to death in a failed robbery attempt while collecting rent in a Brooklyn building. The building superintendent witnessed the shooting and ran to get help from the janitor, who intervened during the attack and was shot and seriously injured in the process. In an interview about two weeks after the murder, the janitor told a detective and an assistant district attorney in an audiotaped interview that he had cut the perpetrator on his right side with a knife during the scuffle.

At the time of his death, tenants in a news report described Pollack as a devoted father and a nice man who “treated everyone fairly” and “didn’t hassle you” about late rent. His kindness apparently also extended to his workers; Pollack had permitted the janitor, a formerly homeless man, to reside in the building’s basement in exchange for helping out the super.

About a month after Pollack’s death, Collins was arrested. About a year later, he was convicted of the murder. From the beginning, however, police had exculpatory information relating to Collins and leads pointing to someone else’s involvement, according to court documents.

For example, police records indicate that neither the building super nor the janitor — both eyewitnesses to the actual incident — picked Collins out of a lineup. Collins also had a strong alibi placing him elsewhere during the crime. Further, while police records show that eyewitness accounts given to detectives on the day of the killing established that the perpetrator was injured on his right side and bleeding after the attack, Collins had no such injury when he voluntarily appeared at the 90th Precinct for a police interview 12 days after the murder.

Indeed, police reports from early in the investigation detail the accounts of several witnesses indicating that the real perpetrator was a local drug dealer who, along with his brother, had been under recent investigation for a different robbery. In fact, less than an hour after the crime, the superintendent was shown photos of the brothers and said they each resembled the perpetrator. (According to one police report, when the two brothers appeared at the 90th Precinct at the request of a detective, they refused to talk without a lawyer; one brother, the report noted, had a scar “on stomach area.”)

Despite all this, after receiving an anonymous phone call implicating Collins, the police re-focused their investigation on him. To build their case, they relied on three witnesses heavily involved with drugs, none of whose accounts matched those of the actual eyewitnesses. One of these witnesses claimed that while he was inside a furniture store and on the phone with a 911 operator reporting the shooting, he saw a black man run by — an observation that could have lasted no more than a few seconds; transcripts of the 911 calls regarding the crime do not, however, include any such phone call but do link the other suspects circumstantially to the crime.

Further, police obtained positive identifications using highly suggestive photo arrays, such as one in which Collins was wearing a white cut-out T-shirt and his arrest number was visible, while all the other photos featured older men dressed in dark clothing. They also got a sworn statement from another witness, a heroin addict who had just been arrested for armed robbery and was going through drug withdrawal (his statement was typed for him by a detective).

According to former Manhattan prosecutor and defense attorney Mark Bederow, all of this should have raised red flags for prosecutors.

“If Collins presented an alibi, no indictment should have been sought unless that alibi was conclusively deconstructed,” Bederow told The Jewish Week.

“Add the fact that the credible evidence established that the perpetrator was cut in the immediate aftermath of the homicide, and there existed no evidence whatsoever that Collins was cut or sought medical treatment, the DA should have been concerned that not only was the case against Collins dubious, but [the evidence] appeared to point away from him and towards another person as the perpetrator. The question is not why the DA tried him, but why they even sought an indictment in the first place.”

In spite of this, on the testimony of three problematic witnesses, Collins was convicted of Pollack’s murder.

“When they found [Collins] guilty, everybody was happy. I wasn’t happy,” the relative told The Jewish Week. “I knew just by looking at his face that it was not him.” (At the time, the Daily News quoted someone identified as Pollack’s older brother Izzy, calling Collins “an animal” and saying, “We have no pity on him because he had no pity on us.” However, the relative claims that Abraham Pollack did not have a brother named Izzy or Israel, though there is a Pollack cousin by that name.)

While in prison, Collins amassed substantial evidence that the prosecution — and specifically Hynes’ top aide, Michael Vecchione — coerced witnesses to give false testimony at trial and failed to disclose to the defense exculpatory information, including a witness recantation, and deals with witnesses.

When, in 2010, it became clear that a federal judge would likely vacate Collins’ conviction, the Daily News described Pollack family members as “irate” and again quoted a brother named Israel saying, “If somebody killed the judge, would they retry this person? The dead are not protected by the law.”

Upon learning that Hynes’ office had agreed not to retry Collins, Pollack’s brother-in-law, Bernard Katz, told the Daily News, “I can’t pinpoint who is at fault here. Problems with witnesses, missing evidence; if it’s politics, I don’t know. Politics is always involved.”

The Jewish Week contacted Katz, who declined to comment for publication. The paper did learn, however, that after Collins was released, the DA gave assurances to Pollack’s family that the office continued to believe in Collins’ guilt and that he was released only because of a “technical mistake.”

The relative is skeptical of Hynes’ assurances, however, particularly in light of recent information that has emerged about the office’s involvement in other wrongful convictions, particularly that of David Ranta; in that case, the district attorney held firm for 23 years that he had convicted the right man of killing Rabbi Cheskel Werzberger, who was the sexton to the Satmar rebbe. Comparing the Pollack case to the Werzberger case, the relative said it appears that in both cases, the district attorney may have been more interested in getting a quick conviction in a high-profile crime involving a key voting bloc than actually delivering justice.

“How could [Hynes] get away with [not finding the real killer] for so many years? If he did it in the Jewish community, I bet he did it in other communities, too. In my heart, I am still fuming about how this can happen.”

There are other members of the chasidic community who feel a similar sense of anguish and bewilderment over the case. Isaac Abraham, an influential Satmar community organizer who ran for City Council in 2009, sat through both the Ranta and Collins trials, and has also been in touch with the Pollack family over the years.

“Little did we pay attention to how the prosecutor [did his job at the time], but I sat through the [Ranta] trial and not knowing much, and not being able to ask any questions. … I was fully convinced that David Ranta had something to do with the botched hold-up. On the Pollack case, [I thought the] the same thing [about Collins],” Abraham told The Jewish Week.

“When I spoke to the family members when this whole thing with Collins was coming out, one son told me, ‘I don’t think I’ll make it through court [if someone else is tried for the crime], listening to this garbage again.’ I understood it. It’s almost like Rabbi Pollack and Rabbi Werzberger are being killed twice.”

Echoing the relative’s comments, Abraham said that he doesn’t “know what the agenda was at that time for the DA. I know they were pretty desperate to close the case. But the question is, were they trying to take the HOV Lane and E-Z Pass and convince the jurors?”

A spokesman for the Brooklyn district attorney, Jerry Schmetterer, told The Jewish Week, “In light of the ongoing civil lawsuit the Corporation Counsel has requested we make no comments regarding the Jabbar Collins case.” (Vecchione was deposed in the suit last Friday and Hynes is expected to be deposed in August.) Yet, lawyers representing the city in the suit wrote recently in a legal filing that “substantial evidence continues to point toward Mr. Collins’ guilt.” They argued that the sworn statements of a witness who said he was coerced to lie were not credible and noted that his recantation was “fleeting.” (The filing does not address the testimony and sworn statements of the other two witnesses alleging coercion by the prosecution, or the exculpatory evidence related to Collins from the original investigation.)

The city’s latest filing is not convincing to Abraham Pollack’s relative. When asked about Collins’ lawsuit, the relative said, “I am happy for him. I hope he wins.”