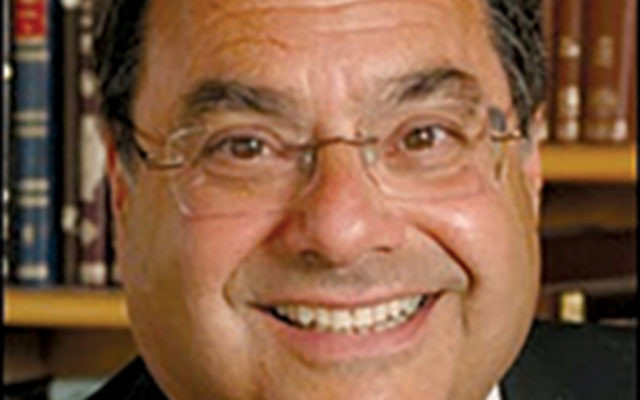 “You must obliterate the memory of Amalek from under the heavens; you must not forget” [Deuteronomy 25:19].

In the age of ISIS, how can we rid the world of terrorist ideologies fueled by raging hatred and horrific acts of cruelty? We are especially attuned to this question as we declare in our Rosh HaShanah and Yom Kippur prayers: “All evil — in its entirety — shall disappear as a cloud, for You shall eliminate the wicked regime [memshelet zadon] from the earth.”

Bridging the gap between the reality and the ideal is complicated by the fact that while we must make every effort to defeat these enemies militarily, the ideology that gave birth to these groups has the capacity to outlive any terrorists that we liquidate. There is no exclusively military solution to an ideological war.

The Torah grapples with the need to combat evil as an ideology, ever since the Israelites were attacked by Amalek in the desert [Exodus 17]. This finds expression in this week’s portion, Ki Teitze, when the Torah commands us to “obliterate the memory of Amalek…”

Our Sages teach that when fighting an enemy as ephemeral as an ideology, our objective is also ephemeral: nothing less than the transformation, and eventual redemption, of evil, in which the evil person(s) repents and accepts at least the Seven Noahide Laws. Our mission is to obliterate the memory of Amalek by making Amalek repent and accept the God of peace and morality.

Examples can be found in the Talmud Sanhedrin, where Sages describe the genesis of Amalek (the child born to Timna from Elifaz, son of Esau) as having occurred because neither Abraham, Isaac nor Jacob had been willing to convert Timna when she came before each of them requesting conversion. Says, the Talmud [Sanhedrin 99b], they should have accepted her into the faith. Even Amalek and its ideology of evil can be redeemed.

Furthermore, the Talmud teaches that the descendants of Haman (the Aggagi, the Amalekite) taught Torah in Bnei Brak [Sanhedrin 96b]. There are those whose version of that text includes the words, “And who was [this descendant of Haman]? Rabbi Akiva!”

As long as Amalek is out to destroy us physically, we must destroy him. Period. At the same time, there is also the possibility of transformation, repentance, and eventually even conversion. In making this transformation possible, we will have obliterated even the memory of what he used to be.

This approach to combating evil, whether an army or an ideology, is also instructive for us during these introspective days of Elul and Tishrei, when we are focused on our personal struggle.

How can we bridge the reality to the ideal?

A story is told of the Alter Rebbe, Rav Shneur Zalman of Liadi, the founder of Chabad chasidism, who would always have “Shalashudis,” the last of the Shabbos meals, just before sunset with his disciples. One particular Shabbat, he asked his gabbai to bring in a young Lithuanian peasant who was standing outside the shul’s door. In answer to the questioning look in the gabbai’s eyes, the Rebbe said, “I feel his Jewish soul; he is one of us.”

When the young peasant entered, the Rebbe seated him to his immediate right. “Tell us of your parentage,” he said in Russian. The youth replied that he was a foundling, left at the doorstep of a kind Christian couple with no children. But he had always felt an affinity toward Jews and Judaism, and even learned the Hebrew letters.

“You were left by your parents, escaping a pogrom and certain death. You are a Jew,” said the Rebbe gently but firmly.

The Rebbe then gave a Torah discourse, turned to the youth and asked, “Do you understand?” “Nyet,” he replied.

Then the Rebbe gave a brilliant analogy, interweaving a moving story with mystical symbolism. Once again he asked his new adherent, “Do you understand?” to which he again answered, “Nyet.”

And then the Rebbe started a melody, a wordless niggun, filled with heartfelt yearning for the Messiah, and desire to joyously hold on to the departing Shabbat. The disciples sang, and the Lithuanian peasant sang. The disciples danced, and the Lithuanian peasant danced. With tears streaming down his cheeks, the youth turned to the Rebbe and cried out, “Now I understand.”

Initially, at least, the way to becoming who we are capable of being begins with joyous song and dance, entering the heart and soul. It must then continue with the study of Torah, penetrating the mind. Once we open our hearts and souls, and then our minds, to God, we, too, can be transformed.