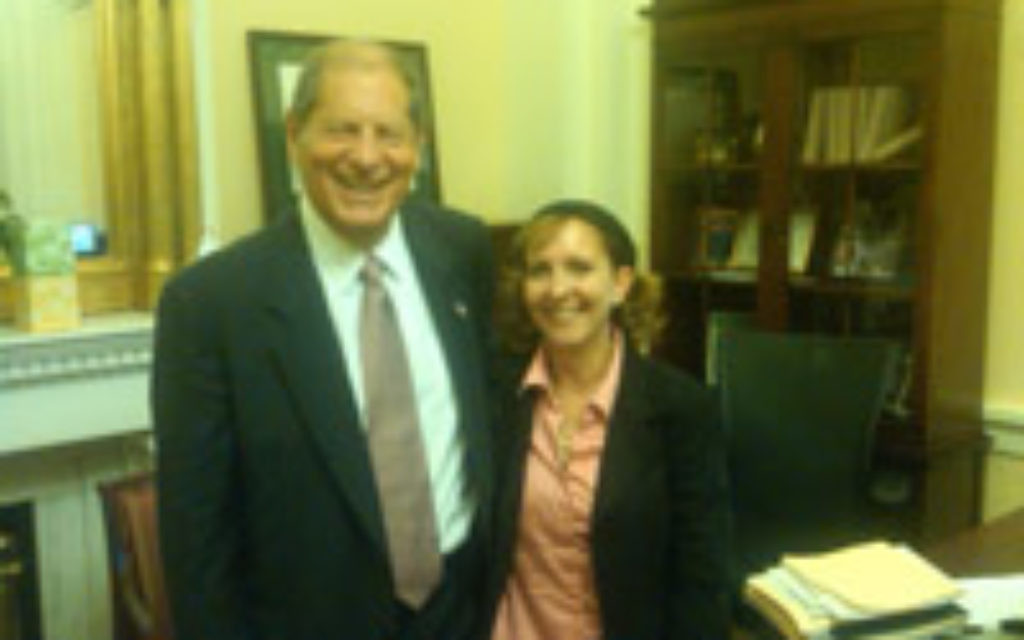 When Bob Turner wanted to talk about the storming of Israel’s embassy in Cairo by rioters, days before the 9th Congressional District election, he turned to Ruth J. Lieberman for advice.

Lieberman is not only Jewish, pro-Israel and a veteran of many political campaigns, but she also has another key qualification: She’s an Israeli.

“He asked me to make sure the facts are correct,” said Lieberman, who helped craft a message criticizing President Barack Obama for waiting five hours to assist Israel in evacuating its Cairo personnel.

That, said Lieberman, was halfhearted support, in keeping with the commander-in-chief’s March 2010 casual reception of Israeli Prime Minister Benjamin Netanyahu rather than a red-carpet dignitary greeting, something many Israel supporters considered a snub.

Hers was a different take than that of the pro-Israel lobby AIPAC, the American Jewish Committee and others who praised the president for his role in the Cairo evacuation.

But the 44-year-old Cleveland native, who lives in the West Bank community of Alon Shvut near Hebron, was in New York to help Turner appeal to Obama critics in a district where Jews are 25 percent of the population and known for high turnout, even in special elections.

Her two-week trip in the home stretch of the successful race was sponsored by members of the Israeli chapter of Republicans Abroad, an organization that musters support for GOP candidates among citizens living or working overseas. Both Democrats and Republicans have such tax-exempt political organizations, known as 527s, around the world.

Although not paid for her work on the campaign, Lieberman quickly became a trusted adviser, sources said, in marketing a 70-year-old retired businessman who ran only one previous campaign for Congress to a district with tens of thousands of pro-Israel voters.

Lieberman’s role shows the extent to which the Israel issue became front and center in a campaign that not only extensively targeted not just Jewish voters, but those who are disenchanted with or feel threatened by Obama’s call for Israel to give up settlements like Lieberman’s and revert to a rough outline of the 1967 borders with land swaps on both sides of the Green Line.

Turner’s campaign manager, O’Brien Murray, said Lieberman “hit the ground running and assisted with outreach to the Jewish community from Queens through Brooklyn. She was a great asset and I wish she had come in sooner.”

Lieberman, the founder and CEO of Jerusalem-based Jaffe Strategies, last year worked on the successful re-election campaign of Florida Republican Ileana Ros-Lehtinen and a decade ago advised Noach Dear, then a City Councilman, in his unsuccessful bid to unseat incumbent Rep. Anthony Weiner in the same 9th district that Turner easily won last week, following Weiner’s resignation in June. She was also part of the media team in Benjamin Netanyahu’s first successful bid to be Israel’s prime minister in 1996.

Turner’s campaign, which was staffed and assisted by many Orthodox Jews, also sent 5,000 pieces of direct mail to American citizens living in Israel who are registered to vote in the 9th CD, sources said. (That’s more than Turner’s margin of victory of 4,128 votes in his 33,816-win upset over Democrat David Weprin.)

One such letter reached Lieberman’s husband, Menachem, a native of Kew Gardens in Queens, who was among a half-dozen members of his family to vote in last week’s race.

“That was the first indication I had that this was a serious race,” said Ruth Lieberman.

While election laws vary by state, New York allows U.S. citizens whose last address here is within the state to submit absentee ballots, according to John Conklin, a spokesman for the state Board of Elections. Voters who miss two subsequent elections are listed as inactive but can still vote in the next election if their identity is verified.

The New York City Board of Elections, which tallied the ballots in last week’s 9th CD race, did not respond to The Jewish Week’s request for data on how many votes were submitted from Israel and how many were won by each candidate.

Larry Sabato, chair of the political science department of the University of Virginia, said he had heard of voters abroad being targeted in presidential campaigns — military absentee ballots were a major sticking point in the 2000 Bush-Gore recount controversy — but this was the first he had heard of a local campaign reaching across the ocean.

“You go where the ducks are,” said Sabato. “If you have these voters registered in your district, you go after them. Whether this has been done before, I don’t know.”

“It’s perfectly legal,” he added. “There many expatriates who are still loyal citizens, who for business or personal reasons live abroad.”

Murray, Turner’s campaign manager, said it was standard procedure for a campaign to obtain lists from the local Board of Elections of people who have filed for absentee ballots, which would include military personnel as well as those living permanently abroad. “Someone who asks for a ballot is definitely going to vote,” he said.

Lieberman’s job did not involve soliciting votes from Americans in Israel, because she joined the campaign close to the deadline for filing absentee ballots, which must be postmarked one week before the election date.

“That part of it was over,” she said.

Lieberman first came to Israel for a year of study in 1983 at Orot Bnai Akiva and made aliyah soon after, permanently deferring admission to Columbia University and instead choosing Bar Ilan University, where she studied political science and journalism. She and her husband have five children, the eldest of whom is 16. She is a member of Republicans Abroad Israel, based in Jerusalem, although she is registered as an independent.

The group got involved in the 9th CD race after its co-chairman, Marc Zell, met with New York State Republican Chairman Ed Cox during a New York visit early this summer.

“He mentioned that this election has been transformed to a national referendum of sorts,” Zell recalled on Monday. “Mutual light bulbs went off.”

Zell is an international lawyer who has lived in the West Bank community of Tekoa since 1987. A native of Washington D.C., he said the Republicans abroad chapter has about 2,500 members and was founded around the same time he came to Israel, though his involvement began in the early ‘90s.
A critic of Obama, Zell said he encouraged Israelis with ties to the 9th CD to get involved and raised the money to send Lieberman to New York. While individual members, including Zell, also made contributions to the Turner campaign, the organization did not collect these contributions.

“Our efforts were mainly at getting folks back in the district to vote,” said Zell. “Many people who were not eligible for absentee voting called their family and friends.”

In Zell’s view, like that of former Mayor Ed Koch, a prominent Turner backer, the stakes of the election went beyond the district. “It’s not the candidates themselves that are the issue, but the message to be sent to top Democratic party leaders about the White House’s handling of the Middle East peace process, and particularly the relationship with Israel. Not that I don’t have high regard for Bob Turner as a great candidate.”

Looking ahead to next year’s election for the White House and Congress, Zell said his organization is galvanized by Turner’s victory.

“When we embarked on this enterprise we didn’t know where it would lead,” he said. “But after the results of this election we think we can duplicate this kind of effort around the country in strongly democratic districts where the Jewish vote is taken for granted.”

Zell defended the involvement of his group in picking a representative in a district in which its members have no plan to live because members of Congress affect national and international policy. “It’s not like we are disconnected from the district,” he said. “Obviously [New York voters] have other issues at heart, but we’re focused on a particular issue: Israel and the Middle East, which is important to Jewish voters and voters who are concerned all over the United States.”

Lieberman was with Turner on Sept. 15 when he was sworn in on Capitol Hill, and she said the ebullient Republican leadership treated her and other campaign staff “like royalty.”

She said she may continue to offer advice to Turner “on a very informal basis.”

Lieberman said her role was strictly Israel-oriented and she was not part of efforts to derail Weprin’s campaign because of his vote for gay marriage in the State Assembly, an issue raised by a group of Flatbush rabbis as well as Assemblyman Dov Hikind, who backed Turner.

“We didn’t touch it,” she said. “If anything it was [said] on the street, but not by campaign.”

Turner, who lost the Queens portion of the district to Weprin, carried the Brooklyn half and fared extremely well in heavily Catholic areas such as Bergen Beach in Brooklyn, Howard Beach in Queens and his own neighborhood of Breezy Point in the Rockaways.

Turner strongholds also included areas with large Orthodox populations such as a section of Flatbush, and Forest Hills. In some precincts in Kew Gardens Hills, the margin was three-to-one in his favor, according to an analysis by The New York Times.

“Our job was micro-targeting,” said Saftlas. “We used a poll from McLaughlin and Associates [on opinions in the district] that told us everything we need to know about voters’ repudiation of Obama’s policies. We took that report and ran with it.”

Schenker, who worked in the city’s Department of Housing Preservation and Development under Mayor Rudolph Giuliani and later for William Thompson when he was city comptroller, said he joined the campaign with some uncertainty about the outcome.

“I knew people were upset about Eretz Yisrael and taxes and jobs,” he said. “I knew we were going to be up against the Democratic machine and we couldn’t be overconfident. But in my gut I had a very good feeling about it.”