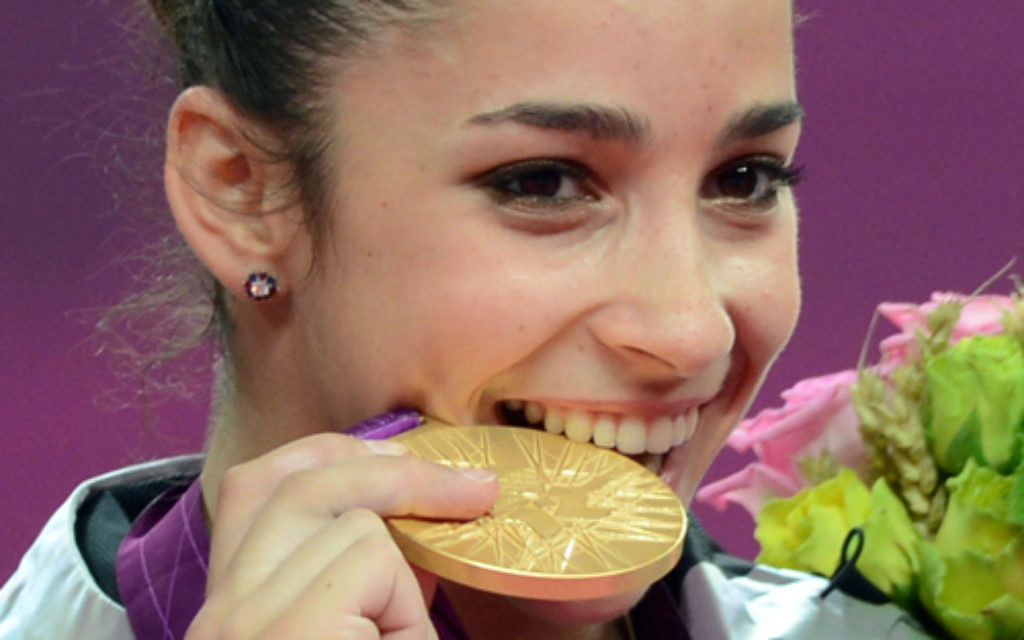 Sports fans this week learned about the mettle – and the gold medal – of Alexandra “Aly” Raisman, the 18-year-old American gymnast who led her women’s team to victory in the Summer Olympics in London. Her performance on floor exercise, done to a jazzed-up version of Hava Nagila, sealed the U.S. squad’s victory over the Russian women.

Raisman, a rising star in American gymnastics since the middle of the last decade, entered the Summer Games in the shadow of teammates Jordyn Wieber and Gabrielle Douglas, but emerged, as her squad’s captain, as the most consistent performer.

Rabbi Keith Stern, spiritual leader of Temple Beth Avodah in Newton Centre, Mass., where the Raisman family are members, has seen another side of Raisman for several years.

“Aly is what you see on TV … gracious, confident, focused,” Rabbi Keith Stern of Beth Avodah told The Jewish Week in an e-mail interview. “She was the same at her bat mitzvah. She’s a terrific big sister. Her family is very connected to temple and Jewish life.”

Raisman’s role in London this week brought back memories of the last time the U.S. women’s gymnastics team won a gold medal in the Summer Olympics, in Atlanta in 1996. The highlight that year was the final vault of Kerri Strug, an 18-year-old Jewish gymnast from Tucson, who had injured her ankle on a pair of leaps, then — in the team’s anchor position — completed her last vault. Her vault assured the gold medal for her teammates, as she landed on her good foot, collapsed in pain and eliminated herself from subsequent competition. In an iconic scene, Coach Bela Karolyi carried her to the awards ceremony, where she stood on crutches.

Raisman, who has said that videos of Strug’s historic 1996 performance inspired her to become a gymnast, remained healthy throughout.

This time, no crutches.

Games over and over again, and I was really inspired when the team won the gold,” she told one biographer. “I remember all the athletes, but I especially remember when Kerri Strug landed her vault.”

Raisman’s “Fab Five” this week entered Olympic history alongside Strug’s “Magnificent Seven,” and alongside Mitch Gaylord, the Jewish gymnast who led the men’s team that won the gold medal in the 1984 Summer Olympics.

Raisman, a recipient of the Jewish Sports Hall of Fame Outstanding Female Jewish High School Scholar-Athlete of the Year Award, has said she performs to Hava Nagila, what may be most-recognized piece of Jewish music in the world, “because there aren’t too many Jewish elites out there. I like how the crowd can clap to it.”

The congregation is “ecstatic about her success in London!” Rabbi Stern said. “We feel enormous pride in her as ‘one of our kids.’ We’re hoping to do a welcome home and mazel tov for Aly when she gets home. She will be swamped with various press/media obligations, but we're scheduling something for sure.”

Raisman, who earlier had qualified for the upcoming individual all-around title and the finals in floor exercise, her specialty, caused an immediate buzz in cyberspace.

The homepage of the Newton Centre, Mass., congregation this week featured a “Mazel tov to our very own Alexandra Raisman!” greeting, and its Facebook page was awash with notes of congratulations for its favorite daughter. “She is awesome,” wrote one member. “ ‘Like’ if you are proud of our very own Aly Raisman,” posted another. Raisman’s coaches are Romanian-born Mihai and Sylvia Brestyan, who coached the Israeli national team in the early 1990s.

For other Jewish athletes at the London Olympics, the first days of competition brought mixed results. Most Israeli athletes were eliminated early on, while windsurfer Lee Korzits, considered the country’s best bet to win a medal, was in second place of her RS:X event after the first two rounds of the eight-day competition, and Shahar Tzuberi was in 10th place of his windsurfing event.

American swimmer Jason Lezak received a silver medal for his role in helping the 4×100-meter freestyle relay team reach the finals; Mark Mendelblatt was in sixth place of his sailing event.

Raisman, who attended Needham High School until her junior year but did her senior year online in order to concentrate on training for the Olympics, plans to take part in collegiate gymnastics at the University of Florida.

Mike Eruzione, who captained the 1980, underdog, “Miracle on Ice” U.S. hockey team that won the gold medal, had praise this week for Raisman.

“It speaks volumes to the type of person that she is to be able to handle that pressure and yet have some fun at the same time,” Eruzione, a native of Winthrop, Mass., told the Boston Herald. “I think she’s going to go down as the greatest, or one of the greatest, Olympians to ever come out of the state of Massachusetts.”