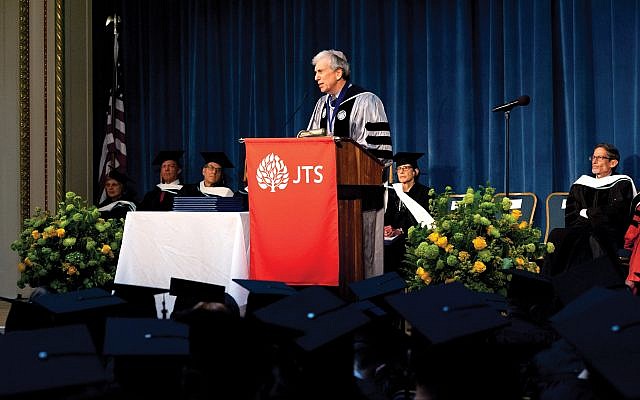 “Whether truth rises up or not in the years to come depends on you and me,” Chancellor Eisen told JTS rabbis-to-be.” Courtesy of JTSredit

Editor’s Note: Following is a condensed version of a graduation talk delivered to the Jewish Theological Seminary graduates on May 23.

What does it mean for someone to choose a career in Jewish leadership in today’s times?

According to the Anti-Defamation League, there were 1,879 anti-Semitic incidents in 2018 alone. Last week, CNN reported that Google documented a significant uptick in “hate phrases” such as “kill Jews” and “all Jews must die” following the deadly shootings in Pittsburgh and Poway, Calif.

We are living through a challenge to our democracy and a concurrent spike in anti-Semitism and other forms of overt prejudice and racism that I never expected to see in my lifetime in America. We are witnessing an overturning of fundamental values, Jewish and American, that I thought until recently were so widely shared they could be taken for granted.

Among the most important of those once-sacrosanct, fundamental values is the commitment to truth. Institutions of higher education like JTS cannot function without that commitment. Science, history and every other academic discipline presume it axiomatically. Telling and seeking the truth has always been a central value of Judaism, and not only Judaism; the well-being of religious and ethnic minorities like the Jews particularly depends upon it, lest, absent devotion to getting the facts right, those who wield might hold unchallenged sway over the depiction of how things are and should be. It is troubling, therefore, that according to a recent report by the Rand Corporation think tank, there is a growing and pervasive blurring of boundaries between fact and opinion in American society and culture today, especially in the domains of government and media.

Listen to the anti-Semitic narrative of worldwide Jewish domination, or white nationalist lies about the dangers posed by immigrants and people of color, or alleged histories of the Middle East conflict that distort or deny facts that many of us have lived through or witnessed with our own eyes, and you understand viscerally why we must never stop insisting on the value of facts or allow them to be replaced by mere opinion. According to the Rand study, that is happening more and more in American society, culture and government. “Trends of truth decay” have contributed to “lack of trust across the board.”

I suspect that the task of truth-telling is more difficult now than it was only several decades ago — truth decay is more advanced and widespread in our culture; suspicion of every authority or claim to truth is virtually automatic; it often seems naïve to trust in anyone or anything. But I believe it will be the case for you, as it was for me, that many of the choices you make in life — your friends, your partners in love, your careers, your faith — will be shaped by your determination, despite and because of the tumult of the times, to use the abilities you possess and the knowledge you acquire to respect rather than scorn “deeds of goodness and truth.” The future of higher education depends on it. Judaism depends on it. And the well-being of minorities, including Jews, depends on it as well.

Why do we care so much about Holocaust denial, or get so upset when people seem content to forget the Nazis’ crimes or get careless about the facts of Holocaust history? If perpetrators of evil can get away with their deeds, then goodness itself seems threatened, and with it the meaning of our lives. The future, too, hangs in the balance. We want to draw lessons from history and cannot do so credibly unless the facts are known. A small people like the Jews, which existed as a minority everywhere on Earth until the founding of the State of Israel, is especially sensitive to the need for truth, for facts, for law. We know how easily these can be manipulated by those with power to their own advantage.

Whether truth rises up or not in the years to come depends on you and me. No responsible commencement speaker can pretend that “all’s right with the world” as you go forth to it, or that you and I won’t be sorely tested by events, or that the situation of the Jewish people today is uncomplicated or the Jewish future secure. But if we have taught you anything at JTS, I hope it is that the knowledge and wisdom stored up in Jewish tradition are a valuable fund for you to draw upon, and that your learning of this tradition empowers you to make the changes, extend the compassion and perform the acts of justice that are required to get us through the mess — and that is the truth

Arnold Eisen is chancellor of the Jewish Theological Seminary.