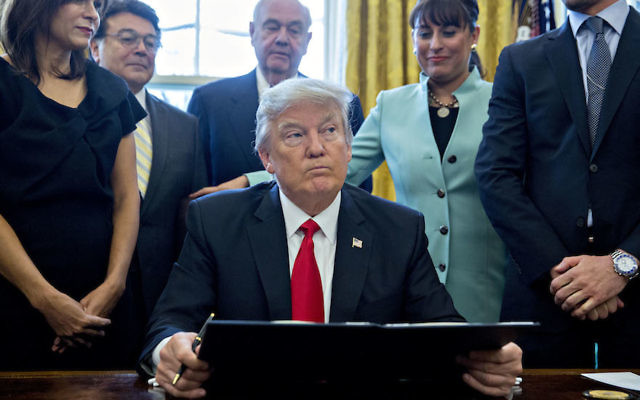 President Donald Trump signing an executive order in the Oval Office of the White House surrounded on Jan. 30, 2017. Getty Images

The president, whose signature on 32 earlier executive orders and other actions has already led to more than 130 lawsuits, found most everyone more eager or angry in anticipation than after reading it. On the morning of May 4, before the release of the order, the American Civil Liberties Union had readied a lawsuit, and by afternoon put the legal pads away; there was nothing to sue about. On the right, there wasn’t much to celebrate. The president’s campaign promised support to conservative religious organizations that had been buckling under legislation, court decisions and President Obama’s executive orders that liberalized national policy on everything from bathrooms to wedding cakes. Many religious people feared they were losing, or had already lost, the culture wars and were being punished for it legally and silenced about it by political correctness. But Trump’s executive order, signed in the Rose Garden, delivered little more than tea and sympathy.

There was a suggestion to the Internal Revenue Service that it show restraint in enforcing the Johnson Amendment, a 1954 addition to the tax code that enabled the IRS to revoke the tax-exempt status of a house of worship whose religious leader endorsed a candidate from the pulpit. But the IRS revoked a church’s tax exemption only twice in 63 years (and never revoked a synagogue’s). In any case, an executive order only lasts until the next president possibly issues an order of his own, and no executive order can override an act of Congress, which is what the Johnson Amendment is. Several religious groups, concerned with freedom of speech, were hoping a Republican-controlled government would finally repeal the Johnson Amendment, not simply offer the IRS a temporary suggestion.

The executive order also asked the secretaries of Treasury, Labor, and Health and Human Services to “consider” the religious needs of institutions that felt they couldn’t offer contraception in their health-care coverage. That issue, almost exclusively a Catholic concern, was largely solved last year when the Supreme Court ruled 9-0 in favor of the Little Sisters of the Poor against the Obama administration’s healthcare mandate requiring contraception coverage.

And so on either side of the great American divide there was a rare consensus that this executive order was hardly a cannonball against political correctness and more like a Hallmark card to conservatives in the culture wars.

Anthony Romero, executive director of the ACLU, declared that the executive order was nothing but “an elaborate photo-op with no discernible policy outcome.” It “does not meaningfully alter the ability of religious institutions or individuals to intervene in the political process [and] the order portends but does not yet do harm to the provision of reproductive health services.”

At the signing of the executive order, the president said, “For too long, the federal government has used the power of the state as a weapon against people of faith, bullying and even punishing Americans for following their religious beliefs. You are now in a position where you can say what you want to say,” and the religious leaders in the Rose Garden gave him a standing ovation, though the executive order was as vague as Trump’s words were vigorous.

The president said, “We are giving our churches their voices back.” But over the course of the campaign we spoke to numerous rabbis, in each of the denominations, and not one of them thought they were being stifled by the IRS. Many rabbis were able to give their congregants a pretty good idea about which candidate they hoped would win. To the extent that any rabbi chose not to endorse often had more to do with the rabbi’s own sense of pulpit propriety or how much politics their congregation could tolerate.

Rabbi Rolando Matalon, spiritual leader of Manhattan’s B’nai Jeshurun, is well-known for his leftist politics but said he was thoroughly opposed to making endorsements, regardless of the IRS. “Clergy can speak about moral issues, sometimes translating into specific policies, to enlighten people,” said Rabbi Matalon, “but to endorse individual candidates? I don’t think that’s something for rabbis or pastors or priests. I don’t do it, not only because it’s forbidden but because I don’t think it’s right.”

Rabbi Matalon added, “People who know me, know that I most likely voted for Hillary, but I never said ‘vote for her.’ Voting is a spiritual act; we [B’nai Jeshurun] even have a blessing to recite in the voting booth. But even when my candidate is in office, it is still my responsibility to maintain critical distance. I don’t like it when religious leaders [endorse or] surround presidents — not now, and I didn’t like it when they surrounded Obama, either. We have to maintain distance, holding governments accountable. That’s what our Prophets taught us, and that’s what our Rabbis [Pirkei Avot] taught us, too.”

A survey released a few weeks ago by the Public Religion Research Institute found that most Americans liked the idea of the Johnson Amendment, with only 22 percent of Americans favoring a tax exemption for places of worship where a candidate was endorsed from the pulpit. Although the Jewish response was not analyzed, no religious group favored the allowance of endorsements, ranging from white evangelicals where only a third (36 percent) favored pulpit clergy endorsing candidates, to black protestants (19 percent in favor). Last June, the Pew Research Center found that 66 percent of Americans were against places of worship favoring one candidate over another. A plurality (49 percent) said that pulpit clergy should even “keep out” of political matters or day-to-day social issues.

On the contraception issue, the PRRI survey found 67 percent of Americans — and 60 percent of Catholics — favored the requirement that employers offer contraception coverage in health care plans.

On the pivotal gay issues that the executive order didn’t address, 22 percent of Jews and 30 percent of all Americans favored an allowance for a small business owner to refuse to provide products or services to gays or lesbians if doing so violates their religious beliefs. Andrew Sullivan, a gay Catholic, recently wrote in New York magazine, “The religiously devout should be permitted their dissent,” and those who agree with Sullivan were looking to the executive order for support, but didn’t get it.

What about minority rights, asked David French in the National Review, “the comprehensive assault on religious organizations on federally funded campuses … the attack on the rights of conscience of dissenters from the new orthodoxies on marriage, the family, and even the definition of male and female? What will the administration do to protect religious freedom when the entire cultural left mobilizes against it? We still don’t know.”

Nathan Diament, the Orthodox Union’s executive director for public policy, who attended the Rose Garden signing, told us by phone, “As a minority faith community [we depend] upon robust legal protections for religious exercise. When these legal protections are weakened — as they were under the last administration — our community’s freedom is weakened. Thus, we are grateful that President Trump has made it clear that his administration will promote and protect the religious liberty of Americans of all faiths wherever possible. We look forward to working with the White House, Justice Department and others to implement the principles laid out in [the] executive order.”

What the executive order did do, said Diament, was to “establish, as an administration policy, that religious liberty is going to be given priority consideration across the policy-making agenda. So whatever policies we’re looking at, at a minimum we can expect a fair hearing.”

However, Diament added that when it came to gay rights versus religious rights, “I, for one, was glad that was not dealt with in the executive order because we’re better off working on that with the Justice Department on a longer timeline in a very careful and balanced way. Ideally, all these issues are better dealt with through the longer process of legislation rather than an executive order. This was more symbolic, more a statement of broad principles than concrete policy.”