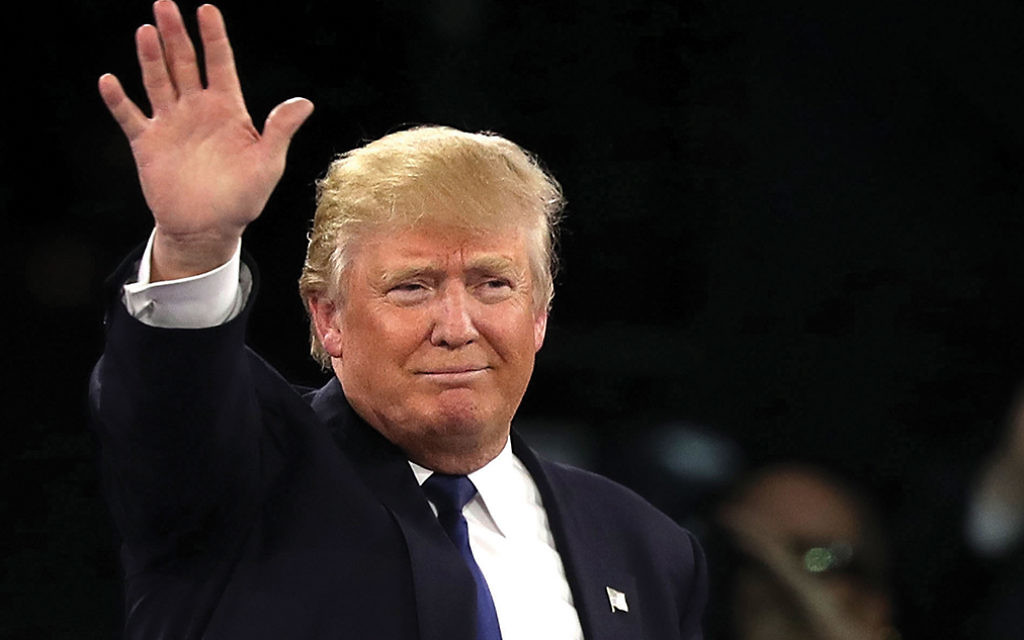 During the Republican presidential debates, real estate tycoon Donald J. Trump insisted that although he wanted to remain “neutral” on the Israeli-Palestinian conflict he is “totally pro-Israel” and has received “the Tree of Life Award and many of the greatest awards given by Israel.”

He has spoken with pride of his close association with his Jewish machatunim — his daughter Ivanka’s in-laws, real estate developer Charles Kushner and his wife, Seryl — and of his three Jewish grandchildren (Ivanka converted to Judaism in 2009 before her marriage to Jared Kushner). He has cited, on multiple occasions, that he was the grand marshal of the annual Salute to Israel parade, which kicks off in the shadow of his Trump Tower residence on Fifth Avenue.

But until now, the scope of his largesse to Jewish organizations — and the disconnect it perhaps causes, given his contradictory positions about Israel — has been largely unknown. A Jewish Week review of his foundation’s IRS Form 990 filings shows that Trump has donated or pledged substantial sums — $100,000 or more — to at least two Jewish groups in the last four years and has been a regular contributor to others. Trump’s spokesperson was contacted for this article but did not reply by press time.

Such largesse to Jewish organizations by a non-Jew is “impressive,” according to Jonathan Sarna, a professor of American Jewish history at Brandeis University and the chief historian of the National Museum of American Jewish History in Philadelphia.

He said he therefore found it “surprising that he [Trump] used the word ‘neutral’ when he was asked initially about his views” on the Israeli-Palestinian conflict.

(Trump has said he did not want to weigh in on the dispute, believing he would have a greater chance of resolving the conflict as president if he maintained an even-handed approach.)

“Given that there are donations to the Anti-Defamation League, one hopes that he will be attentive to some of the lessons the ADL has taught us,” Sarna said. “It is widely known that the Trumps have Jewish friends in New York, and the fact that his daughter not only married an Orthodox Jew but converted speaks to his longstanding ties with members of the Jewish community,” he said, such as Robert Kraft, owner of the Boston Patriots, who “similarly has been a large donor” to Jewish charities.

“It is precisely because of his Jewish friendship, donations and his record that many have been mystified by the tenor of Mr. Trump’s campaign and seeming insensitivity to minorities and refugees. … There seems to be something of a disconnect between his impressive donations and the values that he now espouses,” he said.

On March 21, Jonathan Greenblatt, the ADL’s CEO, announced that “in light of the recent [political] campaign, we have decided to redirect the total amount of funds that he contributed to ADL over the years specifically into anti-bias education programs that address exactly the kind of stereotyping and scapegoating that have been injected into this political season.”

He added in the statement that because of Trump’s “penchant to slander minorities, slur refugees, dismiss First Amendment protections and cheer on violence” on the campaign trail, the ADL was “asking other groups, philanthropies and nonprofits to consider redirecting charitable funds given to them by Mr. Trump into similar initiatives to combat hate, promote tolerance, and build a stronger American community.”

An ADL spokesman said that since the 1970s, Trump has donated a total of $56,000 — $26,500 of which was donated in 2014. The latter gift was made at an entertainment industry dinner honoring the producer of “The Apprentice,” Mark Burnett and his producer wife, Roma Downey.

Trump asserts his close ties to Israel and the Jewish community often by pointing to the time he was grand marshal of the Salute to Israel Parade. He elaborated on that in his recent foreign policy address to AIPAC, the pro-Israel lobby, noting that the parade was held in the spring of 2004 “at the height of violence in the Gaza Strip. It was a very dangerous time for Israel and frankly for anyone supporting Israel. Many people turned down this honor. I did not. I took the risk and I’m glad I did.”

Trump was chosen for the honor by the parade committee because his television program, “The Apprentice,” was just beginning on NBC “and we thought he would be an exciting choice,” recalled Judy Kaufthal, the parade president.

“A mutual friend of mine and of Trump's reached out to me and offered to ask another close friend of Trump's if he would be the grand marshal … and he said he would do it,” she said.

Although today it is called the Celebrate Israel Parade and the grand marshal is requested to make a contribution to help defray its expenses, Kaufthal said there was no such requirement in 2004 and that she did not remember if Trump made a donation.

But it is his role as the parade grand marshal that has helped to give Trump the bona fides to be able to tell Jewish voters they can trust him when it comes to the safety of Israel.

Trump has also pointed out his friendship with Israeli Prime Minister Benjamin Netanyahu and the fact he recorded a video endorsement for Netanyahu during the 2013 Israeli election.

Trump owns real estate throughout the U.S. and overseas, but his plans to build Israel’s tallest building in Tel Aviv about a decade ago were never realized and he has sold the site, according to Israeli media reports.

Although Trump boasted that he has received “many of the greatest awards given by Israel,” the State of Israel has never given him an award.

Yet when Trump showed off his office wall to the Business Insider earlier this year, he pointed with pride to the Tree of Life award presented to him in 1983 by the Jewish National Fund’s New York City real estate committee. It is the organization’s second highest award.

“It means so much to me,” Trump once told the Washington Post.

“A lot of times I’ll have friends of mine come in [who are] Jewish and they’ll see the Tree of Life, and they’ll say, ‘Wow, what a great thing.’”

A JNF spokesman said the award was presented for “his outstanding service and contribution to the Jewish people and/or the State of Israel.”

Although the recipient of the award does not have to be a JNF donor, the spokesman said Trump “has been a generous, dedicated contributor to JNF over the years.”

In addition to being honored by JNF, Trump was recognized in 2000 by UJA-Federation of New York’s Hospitality Division for being an industry leader. He received the Hotel and Real Estate Visionary of the Century Award. Trump gave the organization a $25,000 donation in 2012 and another $15,000 in 2014.

Trump gave a $10,000 donation to the Museum of Jewish Heritage in 2003, according to spokeswoman Lisa Safir, and a gift in 2012 for general operating expenses amounting to $100,000, an amount which puts Trump’s name on the museum’s wall of contributors.

Trump pledged in 2014 to donate more than $100,000 to the Israeli emergency rescue service, United Hatzalah, for the purchase of four ambulances that each cost $26,000, according to the Algemeiner Journal.

He has also been a regular contributor to Friends of the Israel Defense Forces, according to a spokesman for the group, although he would not specify how much he’s given. Trump’s son-in-law, Jared Kushner, is a member of that organization’s national board.

In 2014, Trump donated $3,750 to the Institute for Jewish Humanities; $5,000 to the Jewish Community Relations Council of New York when it honored Stephen Siegel, chairman of Global Brokerage at CBRE; $2,500 to the Gurwin Jewish Geriatric Center in Commack, L.I.; and $18,000 to the American Friends of the Jaffa Institute, a nonprofit child welfare agency in Israel.

In his Algemeiner acceptance speech, Trump noted that he had a “Jewish daughter — this wasn’t the plan, but I’m very glad it happened.” He said also: “We love Israel. We will fight for Israel 100 percent, 1,000 percent. It will be there forever.”