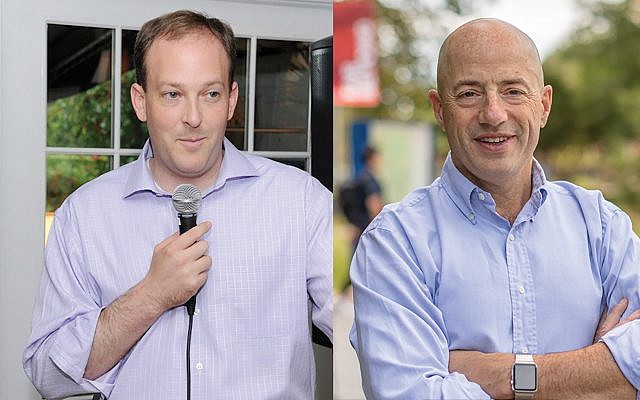 For the past two years, Jan Singer of Kings Park, L.I., has demonstrated outside the Patchogue district office of Rep. Lee Zeldin (R-Shirley) some 15 or 20 times with as many as 300 other protesters.

The number of demonstrators has depended on the topic — some were there to protest Zeldin’s backing of President Trump’s decision to ban immigrants from primarily Muslim countries; on other occasions it was to protest Zeldin’s positions on other topics, such as health care, the environment and guns — he received an A from the National Rifle Association.

“I think most people in the Jewish community are appalled at the fact that he does not represent what I consider Jewish values — such as on the immigration issue protecting the weakest among us,” Singer said. Singer and her fellow protestors may be tilting at windmills, trying to unseat a two-term incumbent, but the political winds in the run-up to next month’s midterm elections may be shifting, on Long Island and elsewhere in the country in the era of Donald Trump.

Zeldin, 38, one of only two Jewish Republicans in the House of Representatives, is running for his third term representing Suffolk County’s 1st Congressional District, which encompasses most of central and eastern Suffolk County, stretching from Smithtown to the East End. President Trump won the district handily in 2016, defeating Democrat Hillary Clinton by 9 percentage points – the largest plurality in the state — and last month tweeted his “complete and total endorsement” of Zeldin.

In 2014, Zeldin defeated six-term Democratic incumbent Tim Bishop by 10 percentage points and has maintained a strong hold on the seat since – winning two years ago by 16 percentage points with 59 percent of the vote. 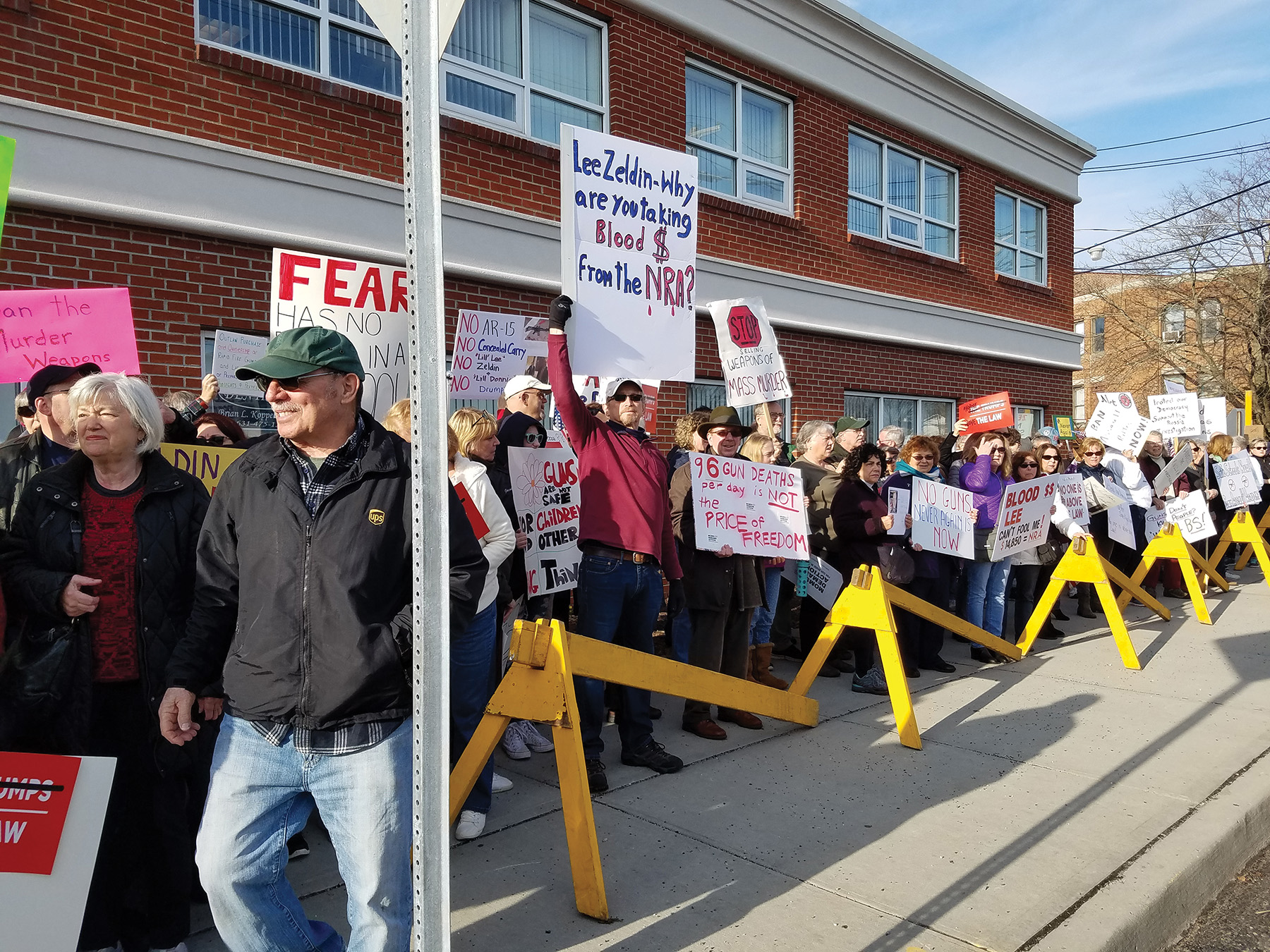 Protesters gather at Zeldin’s office in Patchogue to criticize his policy on guns. Getty Images

But this is a classic swing district, which has given Democrats hope that it will be one of the 23 congressional seats they need to flip in the Nov. 6 midterms to recapture control of the House. A Newsday poll Sept. 26 put Zeldin ahead of Democratic challenger Perry Gershon, but the lead was close enough to be within the margin of error of 4.9 percent. A New York Times-Siena College poll taken earlier this month and based on 502 phone interviews put Zeldin’s lead at 8 percent.

“It was not a huge sample and it used a new polling method that I worry about a little bit,” said Matthew Lebo, a political science professor at Stony Brook University and director of its Center for Behavioral Political Economy. “So it’s hard to say just how close the race really is. But I would guess he [Zeldin] has a large advantage because people have voted for him twice already, and he has much more money. … His signs say vote for a veteran — Zeldin pushes his history as a vet quite a bit. And he refers to Gershon as ‘Park Avenue Perry,’ suggesting he is a carpetbagger. … As a member of Congress for two terms, you would have thought he [Zeldin] would have more to say about himself other than he is local and a vet.”

Gershon’s campaign material stresses the fact that he is not a career politician but rather a successful businessman, entrepreneur and family-man “with a deep devotion to Long Island and the issues that matter to working families.”

In an interview, Gershon, 56, told The Jewish Week that although he has an apartment in Manhattan, he has had a home for the past 20 years in East Hampton and that he pays taxes there. Zeldin, said Gershon, is making the carpetbagger claim “as a ploy to distract people and not talk about the real issues like health care.”

Zeldin’s office provided a link to a video of Gershon saying he spent weekends and the summer in East Hampton and lived in Manhattan the rest of the time. He said that when he decided in 2017 to run for office, he began living on Long Island full-time and changed his voter registration to East Hampton.

The video link was sent in reply to one of a dozen questions sent to Zeldin last Friday at the request of his communications director, Chris Boyle, after The Jewish Week contacted him to set up an interview with the congressman for any time on Monday. The campaign did not make Zeldin available, and Boyle then wrote his own answers to the questions and emailed them Monday night.

Gershon did not ask for the questions in advance and was interviewed by phone.

Boyle said the major issues of the campaign for Zeldin are “protecting our national security at home and abroad … growing our economy … [and] the need to do even more to combat the heroin and opioid abuse epidemic.”

Gershon said one of his major issues is the fact that Zeldin “voted to take away health care coverage for people with pre-existing conditions.”

(According to the Office of the Clerk of the House, Zeldin did vote to repeal the ACA, which established that individuals with pre-existing conditions cannot be denied health care coverage or charged more for individual major medical insurance plans.)

Gershon pointed out that after the ACA vote, Zeldin “withdrew from communication with his constituents — he has held no town hall meetings since April 2017, and now his meetings are by invitation only with pre-screened questions.”

Asked his response, Boyle wrote, “The whole premise of that question is completely not true.” He did not elaborate.

Gershon, who said he is a Reform Jew, was also critical of Zeldin’s support for Trump’s assertion that “both sides” were to blame for the violence at a white supremacist rally in Charlottesville, Va., last year that ended in the death of a 32-year-old woman there to protest the white nationalists.

“I was appalled and protested when Lee Zeldin made those comments,” Gershon said. “Lee Zeldin, who is a member of the Jewish faith, should remember his roots and not support white nationalism.”

Boyle’s email reply: “White nationalism? That’s absurd. Gershon should do some self-reflection and stop lying more often than he tells the truth.”

Analysts believe a surge of Democratic votes at the polls could pull off an upset in a district that has 16,000 more registered Republicans than Democrats. Gershon said he believes Democrats are “more energized” than they were two years ago. He cited a record 76 percent of Democrats who voted in the recent Democratic primary he won – about double the turnout of 2016.

Robert Zimmerman, a Democratic national committeeman from Great Neck, L.I., scoffed at the move, saying Zeldin’s “candidacy has become a rehab center for extremists even Donald Trump had to fire.”

He added that Gershon is “running a very strong campaign as a mainstream Democrat and has mobilized extraordinary support, considering that this race was initially not considered competitive and is now considered very competitive. And Gershon has become a national candidate … because as Lee Zeldin has become a Donald Trump groupie, Perry Gershon has been able to raise money throughout the country.”

But Rabbi Marc Schneier of The Hampton Synagogue in Westhampton Beach said Zeldin continues to “participate in many activities at the synagogue” and that their four-year “friendship has grown exponentially, not only in terms of Israel but in discussing the president’s peace plan in the [Persian] Gulf ….”

A poll released this week for the Jewish Electoral Institute found that although an overwhelming majority of American Jews support Israel, they are almost evenly split in their response to Trump’s handling of U.S.-Israeli relations, and fully 71 percent said they would not consider voting for Trump in 2020.

An exception is Leonard Feldman, an attorney from Smithtown, L.I., who said he supports both Trump and Zeldin in their quest for strong borders and economic programs.

“The stock market has gone up, the GDP [gross domestic product] is up, and unemployment is down – there are more people working now who have not worked in 10 or 15 years,” he said.

Feldman questioned what the “Democrats propose to do economically because I have not heard how they are going to make it better.”