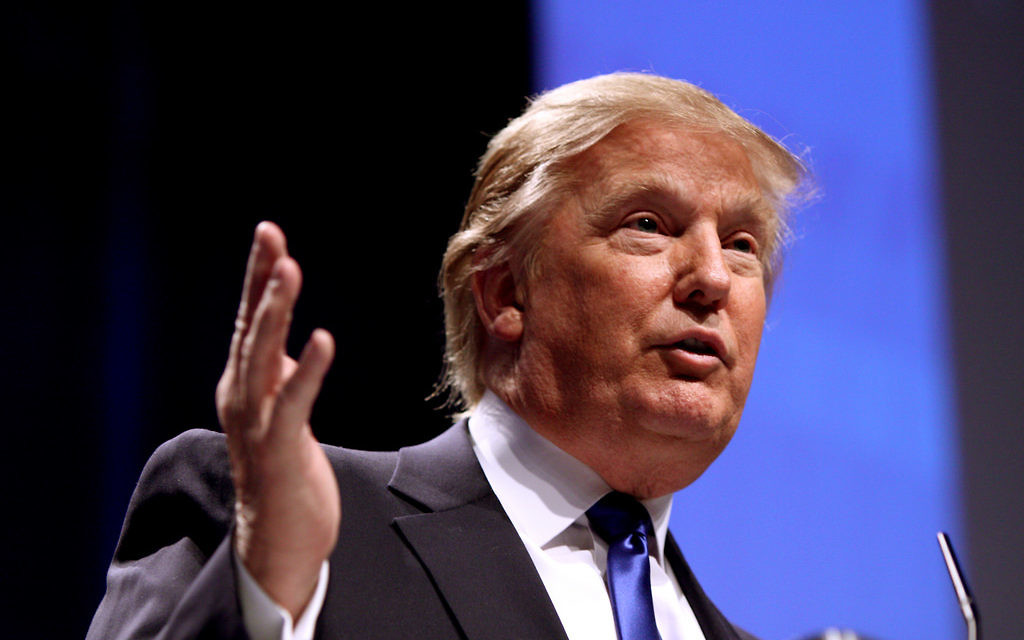 Republican presidential nominee Donald Trump wants to build one wall, and tear down another, it turns out — one that has protected Jews from the start of the republic.

Lost in all the noise from the political conventions is a GOP platform plank that would obliterate the church-state wall as it applies to speech coming from the pulpit.

Trump spoke of it in his acceptance speech at the Republican National Convention in Cleveland: “An amendment, pushed by Lyndon Johnson many years ago, threatens religious institutions with a loss of their tax-exempt status if they openly advocate their political views. I am going to work very hard to repeal that language and protect free speech for all Americans.”

The move is clearly aimed at his evangelical Christian supporters, whom Trump thanked in his speech “for being so good to me and so supportive.”

Trump is seeking to repeal what is known as the Johnson Amendment, which Lyndon Johnson crafted in 1954 when he was the Senate Democratic minority leader. It is an amendment to Section 501(c)(3) of the federal tax code dealing with tax-exempt charitable organizations, including houses of worship. It says they cannot keep their tax-exemption if they intervene in partisan politics by endorsing or opposing candidates for public office.

In explaining Trump’s desire to dump the Johnson Amendment, the Republican Party platform puts it this way: “We value the right of America’s religious leaders to preach, and Americans to speak freely, according to their faith. Republicans believe the federal government, specifically the IRS, is constitutionally prohibited from policing or censoring speech based on religious convictions or beliefs, and therefore we urge the repeal of the Johnson Amendment.”

Such a move “threatens religious life in America,” according to Americans United for Separation of Church and State. Its executive director, the Rev. Barry W. Lynn, called it “short-sighted, reckless and corrosive to religious life.” He said it would turn houses of worship into “miniature political action committees.”

Rep. Ron Klein (D-Fla.) told The Jewish Week that a repeal would also pose a threat to the Jewish community.

“The Jewish community historically has understood the consequences of when church and state are under the same control,” he said. “In Europe and elsewhere it has led to Jewish persecution when the government is controlled or formally influenced by a majority church. The Jewish community is blessed in the United States. … Donald Trump’s move to allow religious institutions to be political is a break with 240 years of American history that has worked well to protect every religion in this country. It’s a very serious issue.”

Rabbi Jack Moline, president of the Interfaith Alliance, the nonpartisan advocacy voice for the interfaith movement committed to church-state separation, said in a statement: “Allowing houses of worship into political campaigns will damage religious freedom by inviting the rewards and punishments of patronage into the pulpit. Do worshipers believe that tearing down the wall between religion and government will allow endorsements to flow only one way? Nonsense.

“Keeping partisan politics out of religion is every bit as important as keeping religion out of politics,” the statement continued. “I urge Mr. Trump to reconsider this position.”

Rabbi Jonah Dov Pesner, director of the Religious Action Center of Reform Judaism, said he also opposes the Republican plan to scrap the Johnson Amendment, explaining that it “helps protect the integrity of both religious institutions and the political process.”

He noted in a statement that the Reform movement “has long supported both robust church-state separation and religious freedom. Clergy have a right — and we believe an obligation — to speak using their prophetic voice on the key moral concerns of the day, while never endorsing a particular candidate from the pulpit.”

But that has not always proven to be the case. When Haskel Lookstein, rabbi emeritus of Congregation Kehilath Jeshurun on the Upper East Side, agreed to deliver the opening invocation at the Republican National Convention in Cleveland last month, he said it touched off such a storm of criticism from former congregants, students and others that he withdrew his acceptance.

“Unfortunately, when my name appeared on a list of speakers [without indicating he was only to offer a prayer], the whole matter turned from rabbinic to political,” he explained.

He told The Jewish Week that the invitation was a “personal request” from one his congregants, Ivanka Trump, Donald Trump’s daughter. He said he had accepted “out of respect for her and our relationship,” which included overseeing her conversion to Judaism.

“I saw it as an honor, and I was not planning to endorse a candidate or a party,” Rabbi Lookstein said, adding that he had planned an apolitical invocation and that he has “never been involved in politics.”

The rabbi declined to comment when asked this week about Trump’s proposal to repeal the Johnson Amendment.

Trump’s push to repeal the amendment is a blatant appeal to his religious conservative supporters — a Pew Research Center poll found that he has the support of 87 percent of evangelical Christians.

Repeal would require congressional approval, something The Atlantic magazine said this week could be done simply be adding a provision to the law that would exempt pastors and other religious leaders who wish to talk politics from the pulpit.

They are already free to voice political opinions in their private capacity, noted Marc Stern, general counsel of the American Jewish Committee.

But the magazine said it is unclear whether Trump wishes to make a change only for religious organizations — which it said would likely face a legal challenge — or was seeking a broad change that “would likely cause minor-level chaos within the U.S. political system: There would no longer be any meaningful difference between charitable groups and lobbying organizations. The government would effectively be subsidizing the political activities of all schools, charities, churches, and scientific-research organizations.”

Stern observed that this issue “has been a concern of a small segment of the evangelical leadership” and has not been a priority for most. It is largely “self-enforcing,” he said, noting: “You really have to look hard for a church or a secular nonprofit that has lost its tax exemption. … I don’t think repealing the amendment is going to make a substantial difference in elections.”