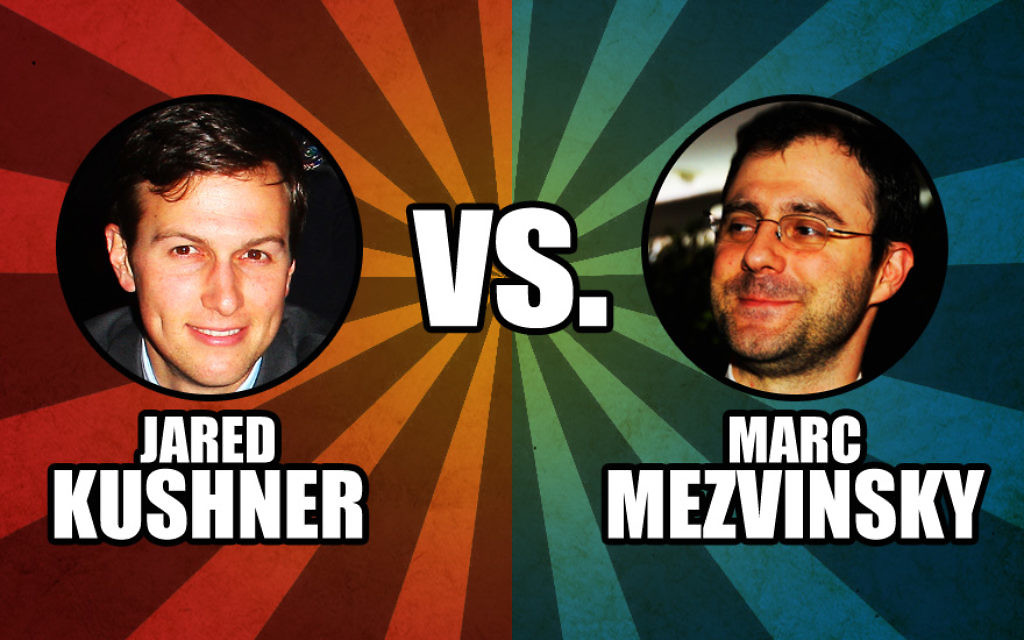 Somebody had better put a mezuzah on the Lincoln Bedroom.

Whoever ends up winning the election in November, one thing seems certain: For the first time in history, Jews will be in the president’s inner family circle.

Both Donald Trump and Hillary Clinton have Jewish sons-in-law, and of course Bernie Sanders — in the unlikely event he makes it to the White House — is Jewish himself (though his daughter-in-law is not).

Mezvinsky: High school at Friends Central in the Philadelphia suburb of Wynnewood; B.A. from Stanford (religious studies and philosophy); M.A. in international relations from the University of Oxford, England.

Kushner: Grew up in Livingston, N.J. Father, Charles Kushner, ran a real estate empire until his imprisonment and is involved in various Jewish philanthropic endeavors. Mother, Seryl Kushner, is involved in the family’s business and philanthropy. Has three siblings.

Mezvinsky: Grew up in Philadelphia. Both parents served stints in Congress as Democrats: father, Edward Mezvinsky, served two terms from Iowa in the 1970s (and decades later went to prison); mother, Marjorie Margolies-Mezvinsky, a former TV journalist, served a single term from Pennsylvania in the mid-‘90s. Parents are now divorced. Has one full brother, four half-siblings and five adopted siblings.

Kushner: Often described as a wunderkind, Jared Kushner has doubled the assets of his family’s real estate empire since taking over as CEO in 2008. In 2014, Kushner Properties did $2 billion in transactions.

Mezvinsky: Worked at Goldman Sachs for eight years before launching Eaglevale in 2011, which now has$326 million under management. But the hedge fund was down 3.6 percent in 2014, largely due toMezvinsky’s bad bets on Greek debt.

Mezvinsky: Appears at non-political events with the Clintons, but has no known involvement with Hillary’s campaign.

Kushner: Belongs to an Orthodox synagogue, Manhattan’s Kehilath Jeshurun, observes Shabbat and kosher restrictions, and is raising children as Jews.

Mezvinsky: Grew up in a Conservative synagogue, has been seen in shul on occasion with wife Chelsea Clinton and is raising daughter with both Jewish and Methodist traditions.

Mezvinsky: Chelsea Clinton is still a practicing Methodist. The couple married in an interfaith ceremony featuring a huppah and co-officiated by Rabbi James Ponet of Yale University and Methodist Rev. William Shillady.

Why Dad went to prison

Kushner: Hired a prostitute to seduce his brother-in-law, secretly recorded the encounter and sent the tape to his sister as part of a blackmail scheme. He served 16 months after guilty pleas to 18 counts of tax evasion, witness tampering and making illegal campaign donations.

Mezvinsky: Bilked friends, family and strangers out of some $10 million in bogus schemes disguised as investments in Africa and oil development. He served five years after pleading guilty to 31 counts of felony fraud, including bank fraud, mail fraud and wire fraud.

Kushner: Stylish 10-room apartment on Manhattan’s Upper East Side at – where else? – Trump Park Avenue.

Mezvinsky: A sleek apartment in Manhattan’s Flatiron district, on 26th Street, that the couple bought in 2013 for $10.5 million.

Mezvinsky: Daughter Charlotte, 1, and one on the way.