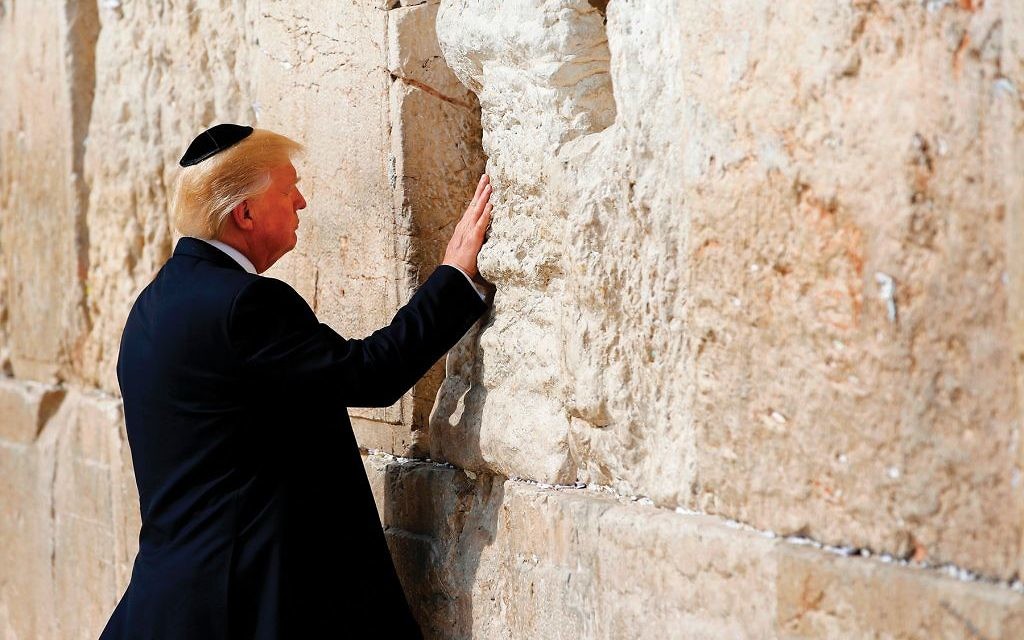 President Donald Trump received warm receptions from Arab, Israeli and Palestinian leaders this week during his first foreign trip, but those hoping to see him revive the Israeli-Palestinian peace process were disappointed.

Americans for Peace Now decried what it called Trump’s “hollow visit” for being “appallingly short on content.” In a statement, it said Trump “said almost nothing about what Israelis and Palestinians must do in the short run to prepare the ground for future peace.”

Similarly, Logan Bayroff, associate director of communications for J Street, said the visit was “very light on substance.” While noting positively Trump’s emphasis on peace efforts, “the president did not talk about a two-state solution, how he intends to help the parties reach an agreement, or any of the difficult and complex issues involved.” 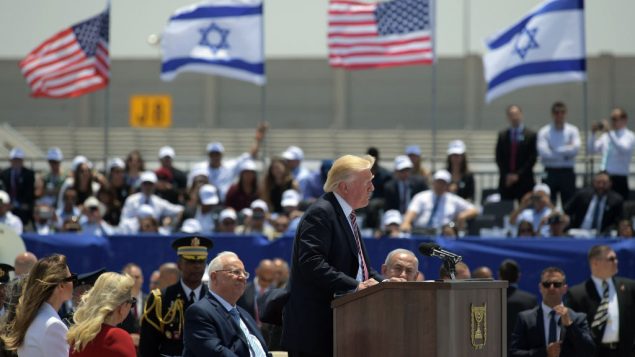 US President Donald Trump (C) gives a speech during a welcome ceremony upon his arrival at Ben Gurion International Airport in Tel Aviv on May 22, 2017, as part of his first trip overseas. Getty Images

But Kenneth Jacobson, deputy national director of the Anti-Defamation League, said it was “not realistic” to have expected much progress on the Israeli-Palestinian issue.

“You have to judge it for what it was, and to that extent it was largely successful,” he said.

In particular, Jacobson said, Trump “took what we all know is a trend — the relationship between the Saudis, the Gulf States and Israel, because of their common interest vis-a-vie Iran — and ran with it. It was a wise move and a positive thing that had a strategic element to it — understanding that there are limits to how far you can go without addressing the Israeli-Palestinian relationship.”

He was referring to Trump’s understanding that the Arab nations are prepared to normalize relations with Israel once an Israeli-Palestinian peace agreement is reached. 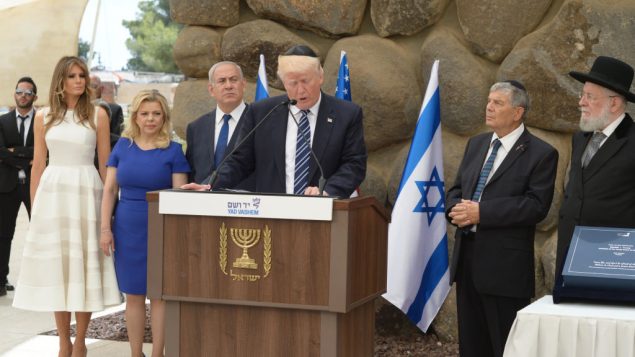 JERUSALEM, ISRAEL – MAY 23: (ISRAEL OUT) In this handout photo provided by the Israel Government Press Office (GPO),US President Donald Trump visit to Yad Vashem Holocaust museum in Jerusalem, Israel, accompanied by Prime Minister Benjamin Netanyahu on May 23, 2017 in Jerusalem, Israel. Trump arrived for a 28-hour visit to Israel and the Palestinian Authority areas on his first foreign trip since taking office in January. Getty Images

Dan Shapiro, the former U.S. ambassador to Israel, said on a conference call Tuesday with the Israel Policy Forum that Trump left Israelis across the political spectrum feeling happy.

He noted that before Trump was inaugurated, the right-wing government of Israeli Prime Minister Benjamin Netanyahu was celebrating Trump’s election because of comments he made during the campaign that suggested a “dramatic shift away from a two-state solution.”

“But there was a splash of cold water in the days after the inauguration when it became clear that the president was reverting to the traditional U.S. policy on Israel and the Palestinians,” Shapiro said. 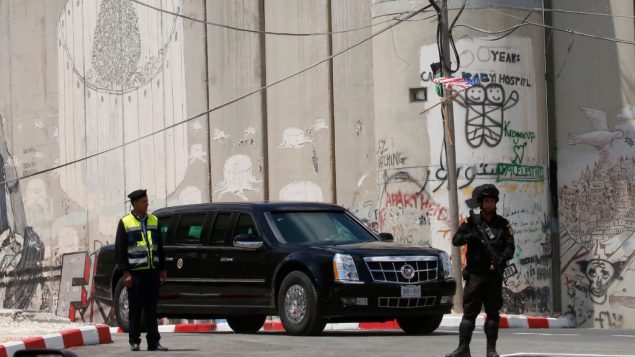 An armored limousine part of the convoy of the US president drives past Israel’s controversial separation barrier in the West Bank city of Bethlehem on May 23, 2017, following a meeting between Donald Trump and the Palestinian leader Mahmud Abbas. Getty Images

In the wake of the Trump visit, Shapiro said Israeli politicians on the right “are pleased the president is not pushing for two states, and that showing strong support for Israel rather than putting its leaders on the on the defensive.” Opposition leader Isaac Herzog and former foreign minister Tzipi Livni also expressed satisfaction, but for different reasons, he noted. “They are convinced there will be a two-state solution and regional [peace]. They can’t both be right,” he said.

Shapiro believes that U.S. policy decisions will have to be made within the next six months and then, he said, “we will know who is right.”

Trump’s chief negotiator, Jason Greenblatt, has announced plans to return to Israel later this week to pursue his peace efforts. 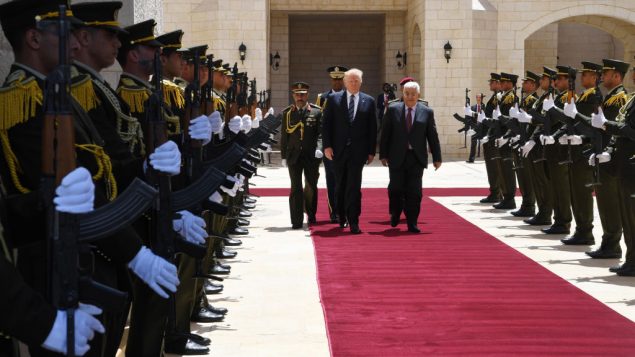 “He will be trying to build on the momentum of this trip,” Shapiro said.

Malcolm Hoenlein, executive vice chairman of the Conference of Presidents of Major American Jewish Organizations, said the “momentum is not towards an agreement but [toward] interim steps, regional support, financial support and promises of political support if there is serious progress.”

For this reason, Israel does not want the Arab states to wait until there is an Israeli-Palestinian peace agreement before they take steps to normalize relations, he said, suggesting, for instance, that the Saudis allow Israeli aircraft to fly over their country as a first step.

“If Israel is allowed to fly over Saudi Arabia, it cuts two hours off flights to the east,” Hoenlein said. “Israel is saying [to the Arabs], if you want to induce people [to make changes], make gestures that open up opportunities for Israel to take steps that give the Palestinians confidence.” 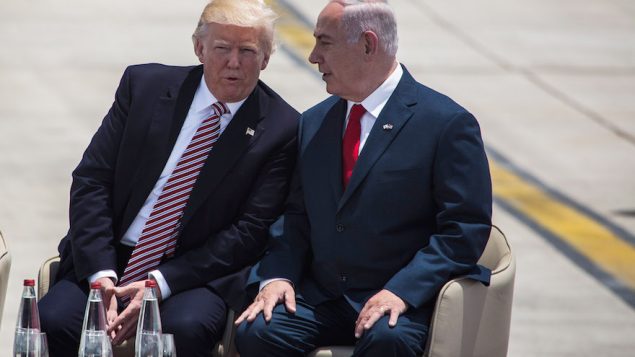 Israel in the meantime would make changes to improve the Palestinians’ quality of life, he noted.

David Makovsky, the Ziegler distinguished fellow at The Washington Institute and director of the Project on the Middle East Peace Process, agreed that Israeli and Palestinian leaders are not now able to “hit a home run given the constraints they face, but if they hit a single it would be significant.”

In a conference call with the Jewish Federation of North America, Makovsky said Trump stressed “tone and not substantive policy changes” during his visit.

“The ultimate solution is that the Palestinian people have to rise up and say to Hamas, ‘We don’t need you.’ Unless the Palestinians have the courage to overcome the problem of Hamas, there will be no deal.”

“There was not going to be any issue that would be allowed to mar this visit,” he added. “It was a feel-good visit. They all wanted Trump to remain engaged in the Middle East. … I would not be surprised if there was a meeting [with Trump, Palestinian President Mahmoud Abbas and Netanyahu] in Washington. I’m not predicting it, but I think it’s possible. He [Abbas] is dropping all conditions [necessary for such a meeting] that he had in the past, and the two have not met since 2010. A meeting would be significant, but what is the plan the day after? Would they go for a single or another home run?”

But Rabbi Marvin Hier, founder and dean of the Simon Wiesenthal Center, questioned how an Israeli-Palestinian peace agreement could be achieved as long as Gaza remains controlled by Hamas, which seeks Israel’s eradication.

“The ultimate solution is that the Palestinian people have to rise up and say to Hamas, ‘We don’t need you,’” he said. “Unless the Palestinians have the courage to overcome the problem of Hamas, there will be no deal.” 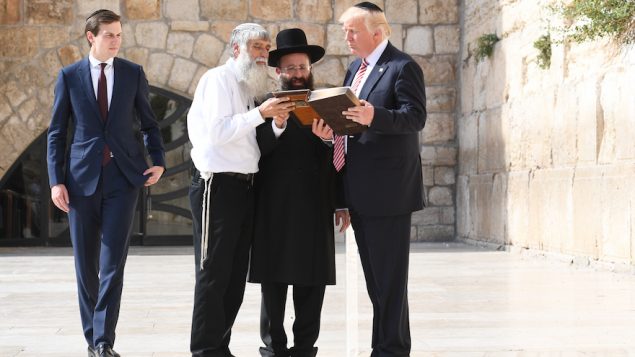 President Donald Trump and Jared Kushner, left, at the Western Wall in Jerusalem, May 22, 2017. (Israel Bardugo)

Ronald Lauder, president of the World Jewish Congress, said in a statement that he shares Trump’s belief “that

it is possible to reach a peaceful settlement in the region without compromising Israel’s security, and I share his hope that we can one day rid the region of extremism and oppression.”

The ADL’s Jacobson said he was “struck by the obvious warmth between Netanyahu and Trump. It is a desirable thing as opposed to the tension that existed before between [President Barack] Obama and Netanyahu.”

“My administration will always stand with Israel. Let’s always remember the bond between our two nations is woven together in the hearts of our peoples. America’s security partnership with Israel is stronger than ever.” – Trump

In his keynote address at the Israel Museum Tuesday, Trump declared: “My administration will always stand with Israel. Let’s always remember the bond between our two nations is woven together in the hearts of our peoples. America’s security partnership with Israel is stronger than ever.”

Trump’s decision to include a 36-hour visit to Israel as part of his first overseas trip is a clear demonstration that “the U.S.-Israel bond based on shared democratic values remains unshakable and is central to his world view,” according to David Harris, the AJC’s CEO.

The Zionist Organization of America issued a statement critical of the major American arms sale to Saudi Arabia that Trump announced during his visit there. The organization questioned how the U.S. commitment to maintain Israel’s qualitative military edge would be impacted by the sale.

“The U.S. arms provided to Middle Eastern nations with the best of intentions have too often ended up being turned against U.S. forces and our allies,” the statement said. “This possibility must also be considered here.”

Seymour Reich, a former chairman of the Conference of Presidents, said he too is “troubled” by the size of the arms package “and the apparent failure of the administration to consult with the Israeli Defense Forces before culminating the deal. But if he [Trump] can bring about some reconciliation and interim steps towards a two-state solution, then he will have hit a home run.”

Hoenlein said he was “told by a U.S. official that Israel’s military advantage would be protected.”