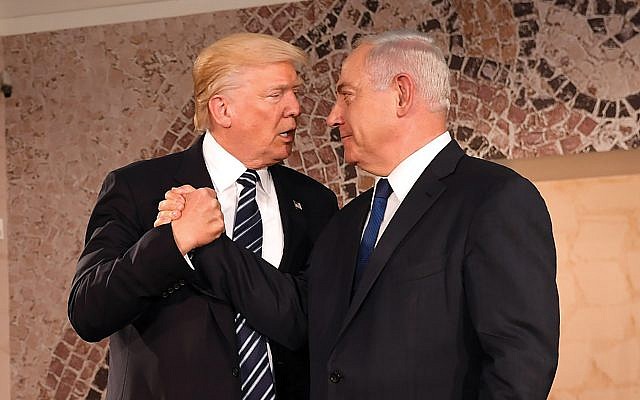 Honest broker in the Middle East peace process: That had been the longstanding U.S. foreign policy toward the Israelis and Palestinians.

And then came President Donald Trump.

A new study by the Pew Research Center indicates that many Americans consider the Trump administration too supportive of Israel. Those Americans — to a far greater degree than any other religious group — are Jews.

According to the national survey released this week by the Washington-based polling institute, 42 percent of Jews agree with the statement that “Donald Trump is favoring the Israelis too much.”

Only the figures for religiously unaffiliated people — the so-called “nones” — exceed the Jewish figure, at 47 percent. (No statistics were given for Muslim Americans.)

In other words, non-Jews are apparently more politically supportive of Trump’s moves regarding Israel and the Palestinians than Jews are.

He said the results reflect many Jews’ visceral dislike of Trump — and, by extension, of politically aligned Israeli Prime Minister Benjamin Netanyahu — rather than a decrease in affection for Israel.

Some 70 percent of Jews in this country “don’t like Trump — there’s a lot of angst in terms of his support” for policies that may not foster a two-state solution to the current impasse, Kahn said. “Trump colors a lot of their thinking.”

“I’m not at all surprised,” said Martin Raffel, former senior vice president of the Jewish Council for Public Affairs. “This is a confirmation of trends that have been picked up in polls for many years — Jews, and [particularly] Evangelicals, look at the issue in different ways. Evangelicals don’t have the same commitment to the two-state outcome” and opposition to the building of Jewish settlements on the West Bank that many U.S. Jews do.

While the Jewish numbers were not broken down according to participants’ political affiliation or liberal-conservative self-description, the Pew findings reflect the composition of American Jewry, which is overwhelmingly Democratic, liberal and typically more critical of Israeli policies than most Republicans are. Republican Jews would probably skew the findings heavily in favor of Israel.

“The difference between evangelicals on this question partly reflects partisan divisions,” according to the study. “Most evangelical Protestants describe themselves as Republican or say they lean toward the Republican Party, while most Jews identify with or lean toward the Democratic Party.”

Some of the unilateral moves of the Trump administration, such as moving the U.S. Embassy from Tel Aviv to Jerusalem and recognizing Israel’s de facto annexation of the Golan Heights, have drawn criticism from many Jews in the center and on the left, who view the U.S. actions as inimical to the Israeli-Palestinian peace process and done without consulting Palestinian leadership. Those on the Jewish right have strongly hailed the moves.