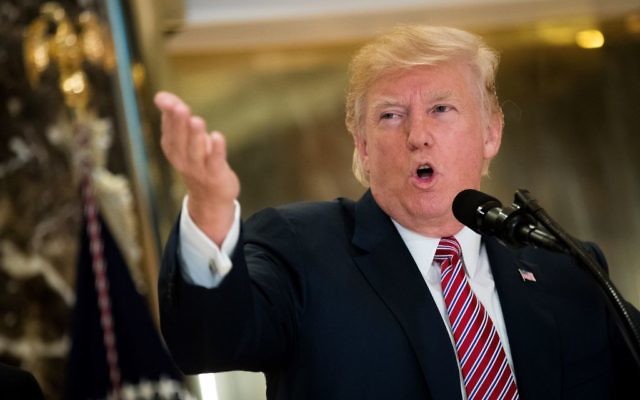 If one looks at President Donald Trump’s life career, you will see a superlative competitor. In the jousting fields of New York real estate, his ability to unseat his rivals has frequently been put to the test and his competitive abilities were sharpened with each victory. Even losses were a learning experience (Atlantic City casinos) as the rider got up, dusted himself off, and remounted for the next challenge.

Trump loves competition. In his very successful TV show, “The Apprentice,” contestants vied with each other for the Boss’ favor. “The Miss Universe” contest, which he owned for a time, pitted young women against each other to get the coveted crown.

For Trump, the primaries for the GOP nomination were his most important competition. With 17 candidates in the field, few gave him any chance of winning, with nighttime TV hosts snickering when his name came up. Again using all the weapons in his armory, he knocked off each of the challengers, one by one.

Then came the general election against Hillary Clinton. Las Vegas didn’t call it a no contest but few gave Trump much of a chance. Clinton turned out to be a weak candidate, without enough stamina to enter the lists and with no weapons except that she wasn’t Trump. November 8 was a shocker to many, with the knight leaving the field with the all time trophy in his hand, becoming the 45th president of the United States.

Winning contests has been Trump’s strength. But January 20th as he entered the Oval Office, requires a totally different skill. He now has to demonstrate the ability to unite, to bring together, an almost opposite skill than what he had been displaying for most of seven decades. Trump won the election because he had an agenda that most Americans desperately wanted. Creating jobs, jobs that had been exported abroad for decades. A healthcare program that would replace the failing one that was installed by his predecessor. An immigration policy that would close the borders to illegal entrants. A tax reform program that would encourage business investment. The elimination of the many onerous regulations that have stifled business initiatives. The restoration of law and order and the termination of sanctuary cities. A stronger military that had been starved of funds for years. The strengthening of our relationships with allies and sharping opposition to our enemies. To improve our decrepit public education system, long abused by the teachers unions. Most of all, to “drain the swamp,” to take away the control of our government and institutions from the powerful elite, the establishment pooh-bahs who had steered our nation in the wrong direction.

But to accomplish so much, the president needs to have the people behind him. He has to become the Great Unifier, because without that, all these wonderful programs will never get off the ground. The last president to have this ability and use it well was Ronald Reagan. Bill Clinton and George Bush received passing grades but not more. Barack Obama was the ‘Great Divider,’ using identity politics to push his agenda, polarizing the country.

The first seven months have not been auspicious in bringing the nation together. Although President Trump has some important accomplishments under his belt, his major initiatives have been stalled. Obamacare is still in place and getting tax and immigration reform remains ahead of us. The latest misstep at a recent press conference, was supposed to center on infrastructure plans. It developed into a discussion on the Charlottesville incident. While Trump didn’t say anything inaccurate, in my opinion, he didn’t help his cause in the way he handled his responses. He had already doused the flames that were previously lit by not initially naming the Neo-Nazis and White Supremacists and he did so two days later. Instead of avoiding that subject all together on this third question and answer session, he again took the bait that the press placed in front of him, and responded in a way that gave more material to those who are intent on causing his presidency to fail.

What is needed is not counter-punching, but hugs. That doesn’t mean that the President doesn’t need to wrestle with the alligators in the swamp, using his well-honed skills in this area. But the best and most effective way to keep the promises that he presented in his presidential campaign is to reach out to the public with words and actions that will bring the great majority of Americans together. He missed that opportunity last week.

Is Donald Trump capable of making the transition from knight in shining armor to philosopher king in order to “Make America Great Again,” using Ronald Reagan or Margaret Thatcher as his model? To date the answer has been no, but for the good of the nation let us all hope he still has the time and the good sense to do so. Because his agenda can still save America from continuing its downward spiral towards becoming another failed state that now litters much of the Western World.