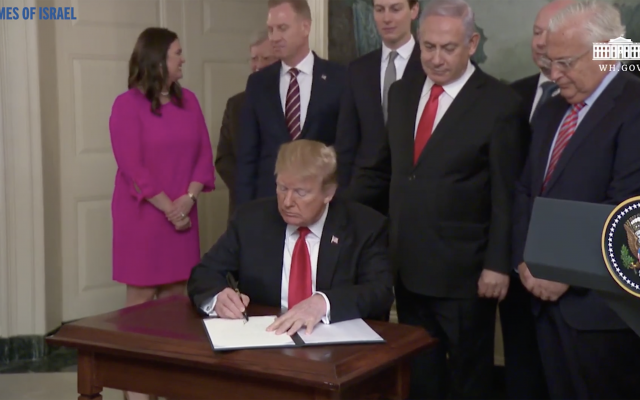 Screenshot via Times of Israel

US President Donald Trump on Monday formally recognized Israel’s sovereignty over the Golan Heights, saying the dramatic shift in American policy will help Israel defend itself against regional threats.

“This was a long time in the making,” Trump said alongside Prime Minister Benjamin Netanyahu at the White House, as he signed the proclamation.

Speaking ahead of the signing, Trump said the move would “allow Israel to defend itself” against the “significant security challenges it faces every single day.” He said Israel “took the Golan Heights to safeguard from external threats,” such as those it currently faces from Syria, Iran, and the Iran-backed Hezbollah terror group.

Israel captured the Golan Heights from Syria in the 1967 Six Day War and extended Israeli law to the territory in 1981, a step tantamount to annexation. But the United States and the international community have long considered it Syrian territory under Israeli occupation. The plateau lies along a strategic area on the border between Israel and Syria.

According to the text of the proclamation, “Any possible future peace agreement in the region must account for Israel’s need to protect itself from Syria and other regional threats. Based on these unique circumstances, it is therefore appropriate to recognize Israeli sovereignty over the Golan Heights.”

It proceeds to “hereby proclaim that, the United States recognizes that the Golan Heights are part of the State of Israel.”

The US president, speaking later in the Oval Office, also said he had studied the issue for “years” and “this should have been done, I would say, numerous presidents ago. But for some reason they didn’t do it, and I am very honored to have done it.” 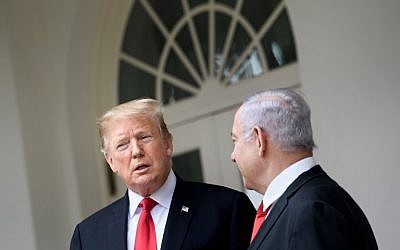 US President Donald Trump (L) and Prime Minister Benjamin Netanyahu talk, while walking to the West Wing of the White House for a meeting March 25, 2019. (Brendan Smialowski/AFP/via Times of Israel)

Trump also vowed to continue his administration’s strong position on Iran, saying his decision to reimpose sanctions on the regime in Tehran were “having a big effect.”

“Iran is not the same country it was when I took office,” he said.

In his remarks, Netanyahu thanked Trump for the “historic” recognition of the Golan Heights, and for his administration’s “incredible support” for Israel.

“Israel has never had a better friend than you,” Netanyahu told Trump.

“Your decision to recognize sovereignty is a two-fold act of historic justice: Israel won the Golan Heights in a just war of self-defense, and the Jewish people’s connection to that land goes back generations.”

Netanyahu said the mountainous plateau along the Syrian border was “invaluable” to Israel’s self-defense, and the “historic decision has profound meaning for me and us and all Israelis.”

“Your proclamation comes at a time when the Golan is more important than ever for our security, when Iran is trying to establish bases in Syria to strike at Israel. From across the border in Syria, Iran has launched drones into our airspace, missiles into our territory,” continued Netanyahu. 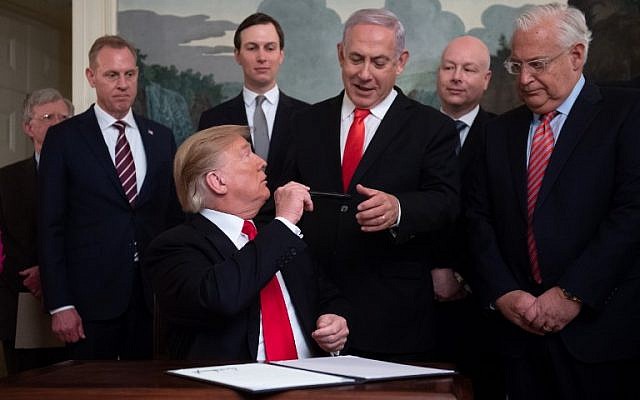 US President Donald Trump hands his pen to Prime Minister Benjamin Netanyahu after signing a Proclamation on the Golan Heights in the Diplomatic Reception Room at the White House, March 25, 2019. (SAUL LOEB/AFP/via Times of Israel)

Trump tweeted Thursday that it was “time for the United States to fully recognize Israel’s sovereignty over the Golan Heights,” upending decades of US policy on the matter.

The announcement was seen as an election boost for Netanyahu, who is facing a tough challenge in the upcoming April 9 polls. 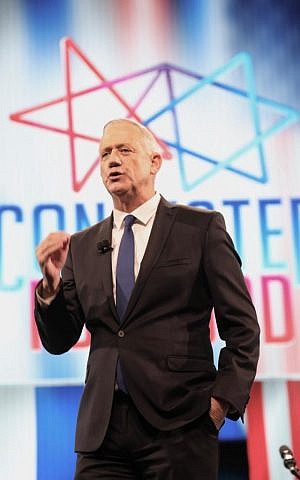 His main rival, ex-IDF chief Benny Gantz, earlier Monday praised Trump as “a true partner and an ally of Israel.”

Netanyahu was visiting Washington for the AIPAC event, but cut short his visit and canceled his AIPAC speech scheduled for Tuesday after a rocket fired from the Hamas-controlled Gaza Strip hit a house north of Tel Aviv, wounding seven Israelis and raising expectations of an escalation of hostilities. Netanyahu was heading back to Israel after his meeting at the White House. 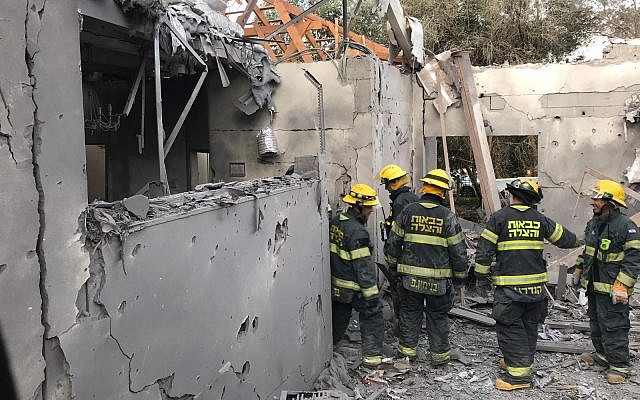 Rescuers at a home in the central Israeli town of Mishmeret, which was destroyed in a rocket attack from the Gaza Strip on March 25, 2019. (Fire and Rescue Services/via Times of Israel)

Trump in December 2017 also became the first US president to recognize Jerusalem as Israel’s capital and relocated the embassy to the city months later.