The most important thing about Donald Trump’s trip to Israel this week probably wasn’t the reaction that he received. It was the reactions that he didn’t receive.

There were so many points for potential tension between Trump’s people and Benjamin Netanyahu’s, especially after last week’s intelligence scandal, but if the visit showed one thing, it’s that the Israeli Prime Minister, who was even willing to speak in Congress to undermine Barack Obama, won’t cross Trump.

And perhaps it was a glimpse into a relationship in which Netanyahu realizes, for once, that he may just be backed in to a corner when it comes to peace with the Palestinians.

As I stood at Ben-Gurion Airport on Monday, watching Air Force One touch down and Trump step off, I found myself remembering the last time I was there, watching this kind of welcoming ceremony. Back in 2013 I was wondering how President Obama, who had such tense relations with the Israeli leadership, would manage his trip. 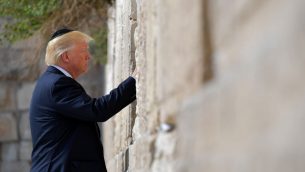 US President Donald Trump visits the Western Wall, the holiest site where Jews can pray, in Jerusalem’s Old City on May 22, 2017. Getty Images

That visit went remarkably smoothly. Had I said then that the next presidential trip would be made by Donald Trump, few would have believed me. If I would have said that not only would it be Trump but this Israel-adoring business mogul — who has even donated to a settlement — would have arrived amid U.S.-Israel controversy the likes of which Obama never saw, I would have seemed crazy.

A cloud hung over preparations for the visit, since less than a week before credible reports suggested that Israel had been the source of the intelligence that Trump passed to Russia.

And yet, from what we know so far, meetings were warm and optimistic, and this issue wasn’t allowed to dominate. Trump and the Israelis stayed focused on friendship, terrorism, the fact he was the first serving U.S. president to visit the Kotel, and something that made this trip very different than other presidential visits: he had come from Saudi Arabia and was touting the possibility that Arab states like this one could back an Israeli-Palestinian deal, and that the Iranian threat could serve as a unifying factor.

Trump said that: “People from all nations, even nations that you would be surprised to hear, they want to stop the killing.” He added: “They’ve had enough.” Often, talk of peace is vague — his was anything but. Trump declared: “I was deeply encouraged by my conversations with Muslim world leaders in Saudi Arabia, including King Salman, who I spoke to at great length. King Salman feels very strongly, and I can tell you, would love to see peace between Israel and the Palestinians.”

It’s a mindset that could help to coax Netanyahu, a man who has long been saying that Israel is building connections with some Arab states and who strongly believes that any deal would need a regional element, to talk seriously about peace. “For the first time in my lifetime, I see a real hope for change,” he told Trump. “The Arab leaders who you met yesterday could help change the atmosphere, and they could help create the conditions for a realistic peace.”

But the visit showed that the Netanyahu government, for all its trading of barbs with Washington ahead of the visit, understands that when it comes to the Trump administration, it won’t be coaxed anywhere — it will comply with Washington. 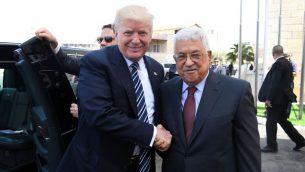 Palestinian Authority President Mahmud Abbas and US President Donald Trump greet each other at the Presidential Palace in Bethlehem on May 23, 2017. Getty Images

Trump, in a bizarre moment during a photo spray, blurted out that he “never mentioned the word or the name Israel” in conversation with the Russians. It was never suggested that he had — rather that the intelligence he shared originated with Israel. His comment is being seen by some as an unwitting confirmation that the intelligence came from Israel.

The fact that the issue came up in such a chaotic off-the-cuff manner indicates that it had not been the focus of discussions, that it was not an issue on which there was a choreographed media response, and that it wasn’t dominating talks. The elephant in the room, the spy-related scandal, was kept in its cage, and Trump set the agenda that he wanted.

Other grievances against Trump were almost silenced during encounters. He ran the trip in a way that, if he were a less bold and less strong-armed president, would have led to irritation and anger on the Israeli side. Who is Trump, Israelis could have said, to tell Netanyahu that he wasn’t welcome to accompany him to the Western Wall, which is considered a national icon of Israel? Scheduling only 15 minutes for Yad Vashem is, they may have said, insulting. The White House kept Israel waiting until the very last moment for many itinerary details, and Trump arrived amid tensions about the issue of whether the US embassy will move from Tel Aviv to Jerusalem.

Trump spoke and Netanyahu listened — nodding, agreeing, and reinforcing what he said. Trump doled out praise for Israel, spoke predictably of the “unshakable” U.S.-Israel bond, stressed that the “ties of the Jewish People to this holy land are ancient and eternal,” and promised a harder stance against terrorism, naming Hamas and Hezbollah specifically. Much of it was music to Netanyahu’s ears — but throughout, it was a visit during which Bibi knew his place.

Trump has shown domestically in recent weeks what can become of those who cross him. Trump’s newfound enthusiasm for Saudi Arabia, a country he used to despise, is a reminder of his changeability and unpredictability.

Some observers are saying that the fact he didn’t explicitly speak about the two-state solution in public comments with Palestinian President Mahmoud Abbas shows that he’s giving Israel the chance to talk about peace in its own way, without the limitations of the two-state model. I see it differently.

I see it as an example of Trump’s disregard for the way things have been done until now, for the phrasing of the international community, and his wish to set the agenda and define the language of the discussion. He isn’t out to champion the two-state solution, but to push forward the Trump Solution. It will probably closely resemble two-state solutions discussed until now but he hasn’t yet figured out the details — and sees no need to tie things down until he’s ready. When he is, Jerusalem and Ramallah will get the memo, or perhaps just the tweet.

In Trump’s itinerary, Israel was a brief but important stop between a regal reception in Saudi Arabia and the grandeur of the Vatican. He showed that he understands and values the country, and has its back, but that Israel needs to remember whom it is dealing with and recognize the extent to which he’ll be setting the agenda.

Now, he just needs to decide what that agenda will look like.