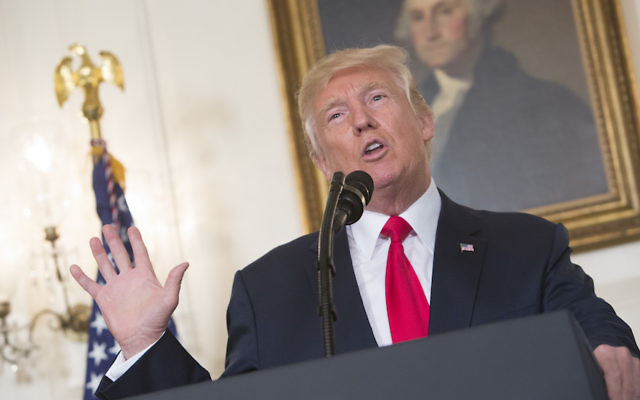 President Donald Trump speaking at the White House on the violence over the weekend in Charlottesville, Va., Aug. 14, 2017. JTA

WASHINGTON (JTA) — Amid a furor over his delay in denouncing a white supremacists’ rally in specific terms, President Donald Trump condemned the “racist violence” at the Charlottesville event and declared that “racism is evil.”

“Racism is evil and those who cause violence in its name are criminals and thugs, including the KKK, neo-Nazis and white supremacists, and other hate groups who are repugnant to everything we hold dear as Americans,” Trump said Monday in a statement he delivered at the White House two days after the rally, which included a deadly car-ramming attack.

“We condemn in the strongest possible terms this egregious display of hatred and violence. It has no place in America,” the president said.

Trump also said the Department of Justice had opened up a civil rights investigation into the car-ramming attack and mentioned the victim — Heather Heyer, 32 — by name. A car driven by a 20-year-old who has espoused neo-Nazi views plowed into counterprotesters, killing Heyer and injuring at least 20.

Trump had been under pressure since the Charlottesville rally to forcefully condemn the white supremacists who descended on the southern Virginia city to protest the planned removal of a statue of Confederate Gen. Robert E. Lee. His initial statement, which condemned “hatred, bigotry and violence, on many sides, on many sides,” angered both Democrats and Republicans for seeming to draw a moral equivalence between the white supremacists and the counterprotesters.

In a subsequent tweet, Trump expressed condolences to “the family of the young woman killed today” but did not name Heyer.

Jewish leaders also noted the widespread expressions of anti-Semitism at the rally, which included demonstrators carrying signs reading “Jews are Satan’s children,” Nazi flags and chants of “Jews will not replace us.”

“This is a moment that demands moral leadership,” Jonathan Greenblatt, CEO of the Anti-Defamation League, said in a statement Saturday. “President Trump should acknowledge that this is not a matter of equivalence between two sides with similar gripes. There is no rationalizing white supremacy and no room for this vile bigotry. It is un-American and it needs to be condemned without hesitation.”

On Sunday the White House put out a statement, attributed to an unnamed spokesperson, saying, “The president said very strongly in his statement yesterday that he condemns all forms of violence, bigotry and hatred. Of course that includes white supremacists, K.K.K., neo-Nazi and all extremist groups. He called for national unity and bringing all Americans together.”

That statement still failed to satisfy many critics who noted that some white supremacist groups were encouraged that Trump had not personally singled them out.

On Monday, David Harris, CEO of the American Jewish Committee, called on Trump to “make clear that our nation does not countenance the warped views of bigots, as was on display in Charlottesville.” He also urged the president “to send a strong message to these extremist groups that their endorsement is not welcome.”