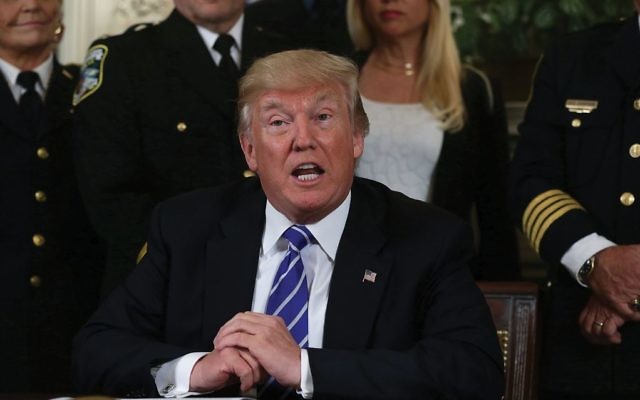 Shortly after President Trump visited Israel, an Israeli minister met in Ramallah with the Palestinian Authority’s prime minister. Did the president orchestrate the meeting? Getty Images

The timing was, well, conspicuous: Just about a week after President Donald Trump left the Middle East, an Israeli minister was sitting down for dinner in Ramallah with the Palestinian prime minister.

The welcome banners for the U.S. president were still hanging in Jerusalem when Israel’s finance minister, Moshe Kahlon, left for an evening with Palestinian Authority leader Rami Hamdallah.

And so, the effect of the Trump visit here has been fast — like his controversially compact Yad Vashem visit. Some of what came afterwards, such as the decision to officially postpone moving the U.S. embassy from Tel Aviv to Jerusalem, was entirely predictable. Other aspects of what has unfolded are surprising.

After all, who would have predicted that so soon after Trump demanded that Arab states unite to fight terror, Saudi Arabia, Egypt, the United Arab Emirates and Bahrain severed diplomatic relations with Qatar — followed by others — citing terror ties? Who would have believed that as an added effect, Hamas officials who have found comfortable homes there would be packing their bags, asked to leave by the very authorities who have been so supportive to them?

And who would have thought that a member of the Israeli government would be heading so quickly to Ramallah, making a trip that hasn’t been taken by an Israeli minister for a decade? If the latest Israeli reports are correct, there was at least one highly surprising comment during the conversation: Prime Minister Hamdallah credited Israel with preventing a third intifada. He is said to have praised Jerusalem for acting carefully and wisely against the wave of Palestinian violence that began in October 2015, and by successfully targeting militants and keeping Palestinian civilians out of the equation.

While Kahlon comes from the center-right Kulanu Party, not the ruling Likud, his visit is believed to have been coordinated with Israeli Prime Minister Benjamin Netanyahu, and therefore represented an official government meeting in every sense.

Kahlon went with a list of confidence-building measures that he has been working on since the Trump visit, which focus on economics and construction. The two men also discussed prospects for peace.

As well as leader-to-leader talks, there has been an unexpected charm offensive aimed at the Israeli public by the Palestinian leader who most Israelis know as the man trying to get their soccer teams banned from the FIFA soccer alliance. Jibril Rajoub, former militant, secretary of the Fatah Central Committee, confidant of the Palestinian president and Palestinian soccer chief, worked hard to allay Israeli fears that the PA isn’t serious about peace during an interview on Israel’s Channel 2.

Putting the Hebrew he learned in prison to good use — complete with the phrase “baruch Hashem” — he said that Trump “represents an opportunity for us and for the Israeli side.” Israelis “have a partner on the Palestinian side,” he insisted, saying: “We are going towards a historic compromise — a compromise between two peoples. Two states for two peoples. The time has come. We need to do it today.”

At precisely the time that reports are circulating suggesting that Trump yelled at PA President Mahmoud Abbas for incitement against Israel, Rajoub presented himself as Israel’s model partner. Despite Abbas’ unpopularity and the question as to whether he could carry a peace deal, Rajoub described him as “the godfather of the Palestinian national movement.” Rajoub continued: “I have personally been part of the conversation for 50 years, and I think that Abu Mazen [Abbas] is the only one and the last one who is able, prepared and who has the [guts] to sign a peace deal.”

As well as waxing lyrical about peace, Rajoub went against the grain of the Palestinian discourse, with a clear admission about Judaism’s most visited site.

Discussing the Western Wall, he said: “We understand that this is a holy place for Jews and at the end of the matter it needs to be under Jewish sovereignty — there’s no argument about this.”

His admission may seem blindingly obvious to most Jews, in Israel and the diaspora, but was notable for two reasons: First, he was moving away from the common Palestinian claim that all land captured by Israel in 1967 must become part of a Palestinian state; and the clear recognition of Jewish attachment to the site goes against growing attempts to airbrush away Jewish connections to Jerusalem.

Trump was almost certainly pulling the strings to put the Kahlon-Hamdallah meeting in place, and the Rajoub interview bore his mark, too.

The president was briefed by the Israelis on Palestinian incitement, a term that is used to include historical revisionism, and his Western Wall visit — the first of any sitting U.S. president — was a key part of his time in Jerusalem. Rajoub’s comment on the identity and future of the Kotel seems to be a response to a Trump request for changes in the PA’s messaging.

It makes sense that Israel and the Palestinians are dancing to Trump’s tune. His visit exposed just how aware they are of his unpredictability and the dangers of not going along with his wishes.

In this sense, the latest developments are more about the Israelis and the Palestinians covering their backs than moving towards peace. “Both the Israelis and Palestinians are scared of being blamed by President Trump if he fails in his express wish to make the “ultimate deal,” Jonathan Rynhold, Bar-Ilan University political scientist, told me this week. “Both sides are very worried because Trump is so unpredictable and doesn’t seem to have a clear concept of what peace means — so in practical terms they are trying to show they are doing their best.”

Is it possible that, against all odds, out of the big bang of Trump’s arrival on the Middle East scene, the small steps of the last two weeks could be followed by others that gather some momentum?

Typically for the Trump era, one’s answer today might look very different from one proffered just a few days ago. The sudden isolation of Qatar could have a very negative impact of the standing of Hamas, which already faces an economic crisis in Gaza. It could all make the terrorist group less of a thorn in the side of the PA if it did move forward in a diplomatic process with Israel, and give the PA more room to maneuver diplomatically and ideologically.

On the other hand, we may have just seen a flurry of Israeli and Palestinian activity initiated by Trump during his visit, which will be forgotten along with the plans to relocate the embassy.