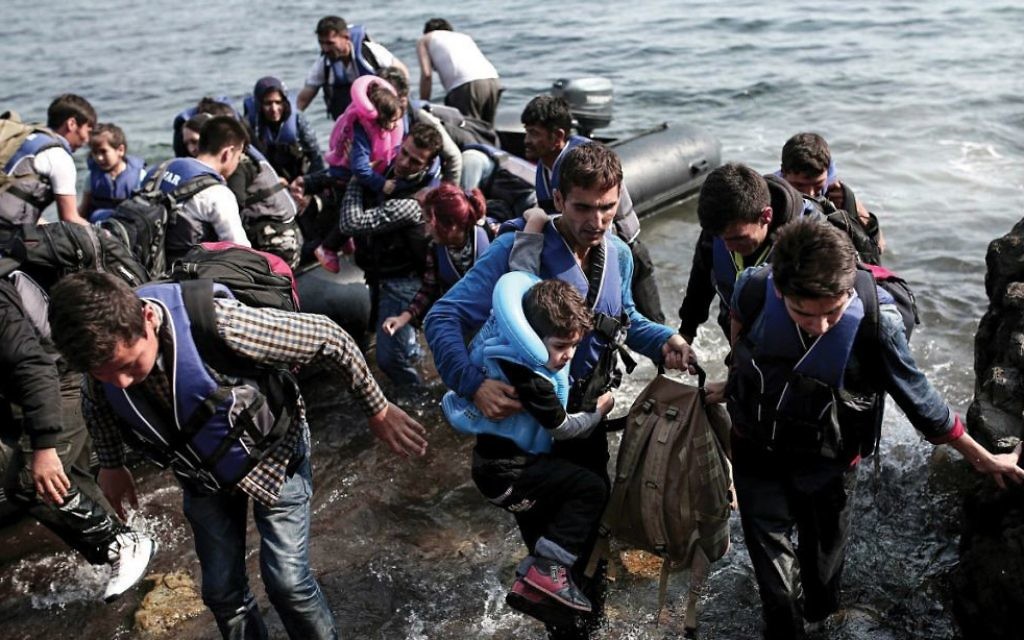 In the midst of the greatest refugee crisis since WWII — including people displaced by civil war in Syria, above — creative additions to this year’s seders will focus on the immigration issue. GETTY IMAGES

During the breaking of the matzah at the beginning of the seders next week, Jews and non-Jews at the table will be able to read a text about “refugees across the globe [who] experience the consequences of having their lives ruptured.”

And in the section of one Haggadah that describes the Exodus from ancient Egypt, the seder participants can read about “courageous people [who] are making similar journeys — leaving behind violence, poverty and persecution.”

These references to the victims of modern-day forced migration are part of a Haggadah supplement, and a new Haggadah, respectively, published this year by HIAS and American Jewish World Service.

“We are refugee people — the Exodus is our core narrative.”

Both are part of a trend that dominates the symbolic readings produced this year by a wide variety of Jewish organizations — all dedicated to the theme of immigration and refugees, a topic that dominated much discussion during the 2016 presidential campaign and the current administration of President Donald Trump.

Passover 5777 is the first Pesach since the president enacted one, then another, executive order — the superseding one now challenged in the courts — designed to restrict immigration from several predominantly Muslim nations. This year, refugees are “very much on people’s minds,” and the seder is the perfect time to mention them, said Rabbi Jonah Pesner, director of the Religious Action Center of Reform Judaism. “We all know what it was to be strangers in Mitzrayim [Egypt].”

“We are refugee people — the Exodus is our core narrative,” said Rabbi Jennie Rosenn, vice president for community engagement at HIAS. The organization’s Haggadah supplement incorporates the stories of “some of the thousands of refugees that HIAS has helped resettle across the United States,” and notes “the 65 million displaced people and refugees around the world.”

Rabbi Elly Krimsky, program director of NJOP (formerly the National Jewish Outreach Program), remembers an empty chair at his family seders in Boston while growing up in the 1980s. The seat at which no one sat at many families’ seders was a tacit symbol of the Jews who were not free to leave the Soviet Union or freely practice their religion there.

In later years, the empty chair stood for victims of terrorism in Israel, and for kidnapped Israeli soldier Gilad Shalit. Such additions as an orange on the seder plate and Miriam’s Cup — symbols of women’s often-overlooked role in Jewish history — became popular.

“People are looking for ways to bring something new to the seder,” said Rhonda Love, vice president for programming at B’nai B’rith International, whose “Enlighten America Passover Reading” urges people to “respect the political beliefs of other people” and to exhibit other forms of tolerance.

Rabbi Krimsky said these creative efforts are a legitimate part of the Pesach spirit.

“The Haggadah,” he said, “is not meant to be a rigid liturgy” — as long as the holiday’s focus on the ancient exodus from Egypt is not in the shadows of current events. “You have to use the language the next generation understands. I would only be concerned when the [ancient Exodus] story is not the main story.” 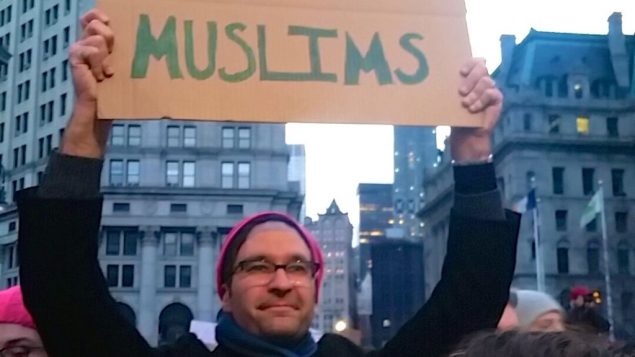 Some of this year’s seder innovations follow a standard pattern, connecting the Jewish people’s history as immigrants to the current refugee crisis, notably the estimated 11 million Syrians displaced by the six-year-long civil war. Other innovations are more quirky: a lock and key, suggested by Rabbi Shmuly Yanklowitz of Phoenix’s Valley Beit Midrash, symbolizing “the growth of corporate prisons that are detaining asylum seekers fleeing violence”; and pine cones, proposed by Rabbi Matt Soffer of Boston’s Temple Israel — the pine nuts inside, said the rabbi, are, like prison inmates, “valuable but unseen, easily forgotten, and difficult to extract from the tough exterior.”

“We feel there is a moral imperative to speak out on this issue,” said Rabbi Rachel Kobrin of Congregation Adath Jeshurun in Elkins Park, Pa., which has produced a collection of illustrated seder plates with questions to stimulate discussion. For the shank bone: “How can we embody the quality of reaching out to others?” For the charoset: “What walls, real or metaphorical, divide us today and how can we break them down?”

“The mitzvah at the seder,” Rabbi Kobrin said, “is to be asking questions.”

“How do I reach out and engage with marginalized communities in an authentic and sustained way?”

The symbolic readings, “in the style of the seder,” are “not intended to replace, but to supplement” the familiar, millennia-old Haggadah text, said Liz Fisher, COO at Repair the World. This year her volunteer-service organization produced, in partnership with the Jewish Multiracial Network, an alternative “Four People” version of the traditional questions asked by the Haggadah’s Four Children.

Among its questions and topics of conversation: “How do I reach out and engage with marginalized communities in an authentic and sustained way?” and “I am so scared of being called a racist, I don’t want to engage in any conversation about race.”

The reading offers answers for each question. 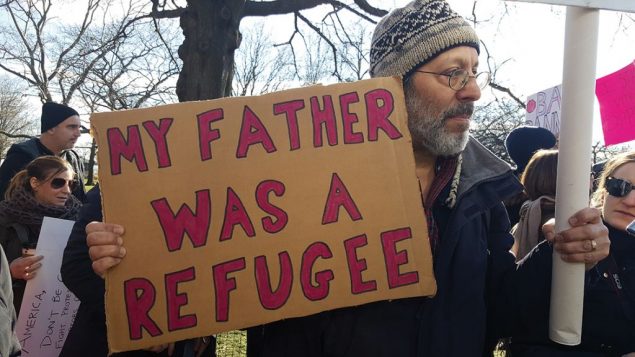 On the same theme, in the weeks before Passover or during the holiday, are a “Refugee and Immigrant Justice Seder Experience” here under the auspices of HIAS, JCC Harlem and the Society for the Advancement of Judaism; an “Immigration Seder” in Milwaukee; a “Nation of Immigrants’ Community Seder” in Boston; and a “Freedom Seder” in Philadelphia.

While many of the current crop of Passover innovations deal directly with the refugees-immigration theme, others, like the American Jewish Committee’s “Festival of Freedom” readings (which states that “our redemption cannot be complete … as long as there are others in need of our redemptive power”), allude to the theme without directly mentioning it.

“How can we protect the precious safety net that supports those who are hungry?”

“We’re not supposed to be divisive at the seder,” said Rabbi Noam Marans, the AJC’s director of interreligious and intergroup relations. “Clearly we are confronting the greatest refugee crisis since the Second World War.”

A few Jewish organizations have turned out Haggadah readings on other themes: “The Zookeeper’s Wife” supplement, a product of HIAS and the International Rescue Committee, salutes the current film about a heroic couple that sheltered hundreds of Jews in Nazi-occupied Warsaw; Mazon’s Fifth Question is, “How can we protect the precious safety net that supports those who are hungry?”; and the Jewish Foundation for the Righteous reading salutes the late Master Sgt. Roddie Edmonds, a U.S. Army officer honored by Yad Vashem last year for protecting captured Jewish soldiers in a Nazi POW camp.

Other new seder offerings among people leading their families’ seders this year include:

A Hebrew Union College-sponsored supplement (valuesandvoices.com) with the “100 Days, 100 Letters” missives sent to political leaders during the initial period of the Trump administration.

A T’ruah “Other Side of the Sea” Haggadah (truah.org/resources/the-other-side-of-the-sea) dedicated to “Fighting Modern-Day Slavery” and a mezuzah hanging that encourages seder participants to discuss their own families’ immigration experiences.

And, for the period following Pesach, a “Stories of Freedom” project in which Congregation B’nai Jeshurun (bj.org) will post online stories of members’ families migration experiences that it has collected in recent weeks.

Rabbi Krimsky, who lives in Hewlett, L.I., said he has not incorporated the symbolic empty seat into his own family’s seders — “Why would I want to have an empty seat? Fill it!” — or added the text of any symbolic readings.