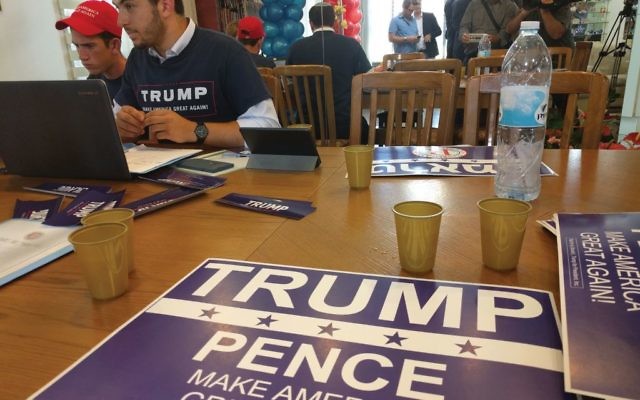 Tel Aviv — With the emergence of a lewd audio tape in which Donald Trump brags about sexual assault, the wheels are seemingly coming off of the Republican nominee’s campaign in the U.S. As Republicans disavow him and his poll numbers tank, Trump is talking of a “rigged” election and vast conspiracy to prevent him from reaching the Oval Office.

But despite all the recent crises, leaders of the pro-Trump campaign in Israel say their support hasn’t wavered. Officials from the Israel chapter of Republicans Overseas — which embarked on a high-profile public relations campaign this summer — insist that the uproar over Trump’s alleged advances on women has not changed how American-Israelis will vote.

“The comments are inexcusable. But I don’t think they really move the needle that much,” said Abe Katsman, the counsel to the Israeli Republican group. “Something like this doesn’t make people shift political positions. When allegations came out about Bill Clinton, people didn’t bail and register as Republicans.”

The Republicans in Israel have hired a string of Israeli campaign professionals to help them do media relations and voter registration. In August the group — which says it is coordinating with the Trump campaign but not is formally connected or funded by it — opened field operations in a handful of Israeli towns to target neighborhoods with large numbers of American residents. Campaign manager Tsvika Brot said the group wants to hold a high-profile campaign event sometime after the final presidential debate this week.

The Israeli campaign aspires to sign up enough expats in Israel to help make the difference in swing states like Florida and Ohio, where polls show a close race. Republicans Overseas also hopes that the public relations buzz from its campaign will echo overseas and help shift voter sentiment among pro-Israel voters in the U.S.

While there are no official data, both Democrat and Republican expat officials in Israel estimate that there are at least 150,000 potential votes in Israel. The challenge for the pro-Trump forces is finding those registered in swing states. According to a 2012 American Jewish population study, some 60 percent of American Jews live in the reliably Democratic states of New York, California, Illinois and New Jersey.

The pro-Trump effort in Israel also continues in the pages of Israel Hayom, the daily free tabloid backed by Sheldon Adelson, the American Jewish casino magnate who is a Republican donor and supporter of Israeli Prime Minister Benjamin Netanyahu.

When several women came forward last week to accuse the Republican nominee of sexual assault, Israel Hayom’s headline carried Trump’s denial of the charges as “evil lies” and called the U.S. media’s focus on the accusations a “negative” low. “Israel Hayom is covering Trump with the same tools developed to serve Netanyahu,” wrote Itamar Baz, a blogger at the media criticism website, the Seventh Eye.

Netanyahu, however, has changed his posture on the race. After giving Republican candidate Mitt Romney an opportunity in Jerusalem in 2012 to attack President Obama, Netanyahu has sought to a more nonpartisan approach. One day before the first presidential debate, the prime minister held meetings in New York with both candidates.

Might all of the focus on allegations of sexual assault and Trump’s so-called “locker room talk” hurt his support among religious and conservative American Jews in Israel? Katsman predicted that it wouldn’t.

“What I’ve encountered is that there is head shaking, but I don’t think it translates into a loss of votes. What it may translates into is a loss in enthusiasm,” said Katsman.

“People may hold their noses tighter even when they were holding it beforehand, but I don’t see it changing people’s votes,” he continued. “I’m no mindless cheerleader for the man, and I never have been. But this is about allegiance to the country. It may not be a pleasant choice, but for me it’s not a hard choice.”

The pro-Trump campaign made headlines in September when it invited reporters to a press conference to kick off a push to register Israelis living in the West Bank settlements. The event was held in Ginot Shomron, a heavily American neighborhood in the settlement of Karnei Shomron. A large Trump banner was hung from the balcony of Rabbi Chaim Spring, 80 from Illinois, who agreed to host the get-out-the-vote operation in his salon.

A sukkah has replaced the banner at the Spring house and the outreach effort has moved on to another settlement, but Spring said that his support for Trump hasn’t been affected.

“If people wanted to complain, they should have done it 11 years ago,” Spring said, a reference to when one of the alleged incidents took place. “In my opinion it’s not an issue,” Spring continued in a telephone interview from his sukkah. “I see his grown-up children, how they love him and work for him. That’s speaks volumes, and nothing else matters.”

Spring said that some 40 voters contacted him to cast absentee ballots. He conceded that Trump has made “foolish” comments during the election campaign, but insists that a victory by Democratic nominee Hillary Clinton would be a “tragedy” for the U.S.

“It’s unfortunate that a majority of American Jews are blinded by voting Democratic no matter who it is. They can’t see beyond their noses.”

Republicans Overseas believe that the vote from the settlements will be overwhelmingly pro-Trump. In Jewish settlements like Karnei Shomron, many believe Clinton will continue the foreign policy of President Obama. When Clinton was secretary of state she and Obama nudged Netanyahu into imposing a 10-month moratorium on housing starts in the settlements.

“My daughter couldn’t build her house next to mine because of that,” said Andy Weiser, a retiree from the Maryland suburbs of Washington, D.C., who was visiting the Karnei Shomron shopping center with his grandkids this week. “We have long memories here. … We’re narrowly focused.”

That said, not everyone from Karnei Shomron’s American neighborhood is rushing to vote for the Republican nominee. Sharon Nussbacher, who lives a few houses away from Rabbi Spring, said she won’t bother sending in an absentee ballot because the race looks uncompetitive in her home state of New York. “I just can’t bring myself to vote for either candidate,” she said.

A few houses down, Ze’ev Gold said the race has split his family. While his father is a dedicated Trump supporter, Gold said he is not an admirer of the Republican nominee because he’s too unpredictable. Gold, a 36-year-old English teacher, said he too isn’t bothering to vote because his home state of Illinois is so overwhelmingly Democratic.

“The sentiment in this settlement is with the Republicans,” he said. “The problem is that they put a wild card at the head [of the ticket]. … Some are worried about what a wild card like Trump would actually do if elected.”