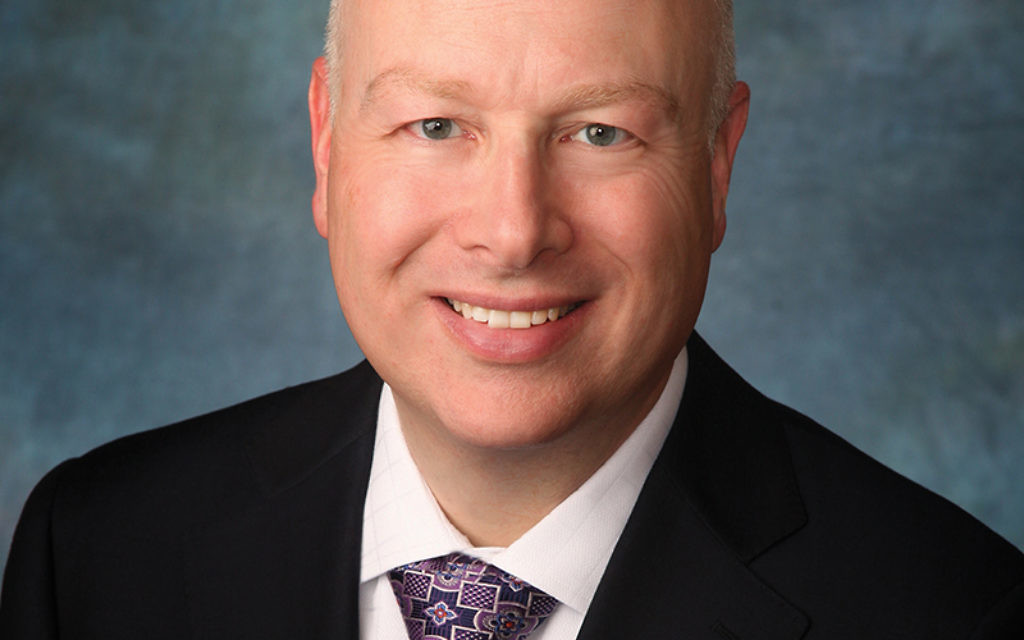 Just because successive U.S. administrations have pushed a two-state solution to the Israeli-Palestinian conflict does not mean it is the only approach, according to the two Israel advisers of Donald Trump, the presumptive Republican presidential nominee.

“A lot of government policy has failed — we need to relook at it,” one of the advisers, Jason Greenblatt, told The Jewish Week during a one-hour interview in a conference room at Trump Tower.

Greenblatt, an Orthodox Jew who is the Trump Organization’s chief lawyer, said: “My view is that we should look at a single-state solution — and any other options on the table. Don’t take two states as a given; it is quite old. Maybe the Palestinians — after having suffered through the leadership they have had and seeing Israeli Palestinians who live a safe and free life — would also like it.”

Trump’s other Israel adviser, David Friedman, a real estate lawyer and bankruptcy expert, also addressed last week a one-state solution. Both he and Greenblatt said it would exclude Palestinians in the Gaza Strip.

The proposal was immediately rejected by analysts and others involved in attempts to restart the peace process.

But the Republican Party platform committee, meeting in Cleveland Monday, revealed that its draft platform pointedly makes no reference to the need for a two-state solution — something the party platform had endorsed in 2012.

Although the platform calls for the U.S. to “assist in the establishment of a comprehensive and lasting peace in the Middle East,” it suggests the U.S. would take a less active role than in the past. It says simply that such peace is “to be negotiated among those living in the region.”

Among those arguing against a one-state solution is Aaron David Miller, a Middle East analyst and vice president of the Woodrow Wilson International Center for Scholars.

“I would argue that this approach would be a fundamental threat to the security and identity of a Jewish state,” Miller told The Jewish Week. “It would be opposed by the 1.5 million Israeli Arabs, and the Palestinians in the West Bank would never agree to it. One state would be forced to reconcile the ambitions and nationalistic aspirations of a large group of people who have no interest or intention of living as equal citizens in what is still going to be a Jewish state. This sets up problems that would be even worse than the situation we have now.”

Susie Gelman, chair of the Israel Policy Forum, an organization that supports a two-state solution, said bluntly: “I don’t see how Israel can continue to be democratic and occupy another people.”

Greenblatt stressed that he is “willing to hear all of the options” and is not suggesting “jettisoning [a two-state solution] or [saying] that it doesn’t work. … All I’m saying is that I would not advise that two states is the only solution. Ultimately the solution rests with the Israelis and Palestinians and not the United States. We need to sit down with the Palestinians and Israelis to see where they are today. If they are not ready to sit down, none of this advice matters. Donald does not want to impose a solution either.”

The United States last week strongly criticized Israel for announcing plans to build 560 new homes in Maale Adumim — just outside of Jerusalem — and another 200 in the city. In addition, 600 new homes would be built in Arab east Jerusalem.

“If true, this report would be the latest step in what seems to be a systematic process of land seizures, settlement expansions and legalizations of outposts that is fundamentally undermining the prospects for a two-state solution,” a State Department spokesman told reporters.

In a letter last week to Rabbi Rick Jacobs, president of the Union for Reform Judaism, Friedman wrote that a two-state solution has “brought neither peace nor security to the State of Israel.”

He argued that both Israelis and Palestinians are being deprived of their right to live in peace and dignity because of “radical Islamic Jihadism. … No reallocation of land will cure this scourge. … Are you not concerned, after seeing the disastrous results of Israel’s withdrawal from Gaza, that a Palestinian state in the West Bank will bring missile attacks to the entire population of Israel?”

Among the “other answers” to a two-state solution that Friedman put forth is a demand for the “Palestinians to end terror, incitement and hateful indoctrination,” and condition continued U.S. funding of the Palestinian Authority on “meaningful progress in this regard.” He said he would also encourage economic investment in Palestinian communities, improve the Palestinian infrastructure and commit resources to “enhance the quality of life” for all in the region.

“If and when those initiatives bear fruit and tensions are reduced, talks could continue about long-term solutions,” Friedman wrote.

And he also rejected the notion that Israel must be either a democratic state or a Jewish state, arguing that Israel would remain a Jewish state with a “solid 65 percent majority” even if it opted for a one-state solution that incorporated the Palestinian residents of the West Bank, whose number he put at 1.7 million people.

But former Israeli Ambassador Yoram Ettinger has argued that such a figure is inflated. He put the number at 1.7 million Palestinians in the West Bank — the same figure cited by Friedman. On the other hand, some Israeli demographers contest Friedman’s figures and point out that he is not a demographer. One of them, Arnon Soffer, has said Jews comprise 52 percent of the residents of Israel, the West Bank and Gaza, and that by 2024 that figure would drop to 48 percent.

Those are the same figures cited by the Commanders for Israel’s Security, more than 200 retired generals who have formulated a series of immediate steps for Israel to take to demonstrate its desire to resolve the Israeli-Palestinian conflict.

Rabbi Jacobs, in written comments in response to Friedman’s letter, asked Friedman: “Are you comfortable being in open disagreement with so many of Israel’s foremost security experts?”

“Accommodating them as equal citizens under Israeli occupation … is fantasy,” Miller observed.

Gelman of the IPF said she has heard the different claims of demographers and that in a one-state scenario she doesn’t “believe people who claim that in the long term Israel can maintain its majority as a Jewish state — it doesn’t seem consistent with population trends.”

Peter Joseph, immediate past chair of the IPF, said a key issue in resolving the Israeli-Palestinian conflict is ensuring Israel’s safety.

“To suggest Israel is more secure in one state is nonsense,” he said. “It shows a gross oversimplification of this issue and it is quite worrying that this would be the kind of advice that Donald Trump is receiving.”

“To start by saying we are not going to talk about Gaza …is total nonsense,” he added. “And how can he say the Palestinians would prefer Israeli rule to a nascent state? Where does he get that from? What is his evidence for that?”

Rabbi Jacobs, in his comments, said the Reform movement supports a two-state solution “because we are fully invested in safeguarding a vibrant, Jewish democracy in Israel.” He said he agreed with Friedman that mere Palestinian promises to change their behavior will not be enough, that “firm security guarantees” are needed and that U.S. leadership can be crucial in that regard.

And the rabbi pointed out that “a ‘one-state solution’ is the preferred solution of many of Israel’s enemies, including those who support the Boycott, Divestment and Sanctions (BDS) movement. … A ‘one-state solution’ is no solution at all. Prime Minister Benjamin Netanyahu, for example, has outright rejected it, saying: ‘A binational state would be disastrous for Israel.’”