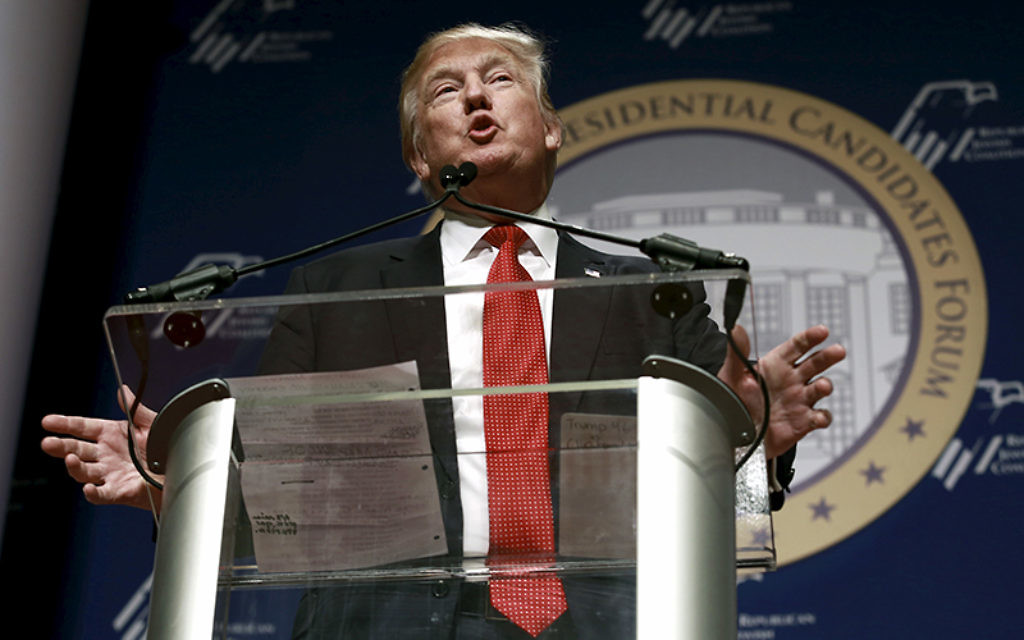 Washington – Republican candidates tried to impress the audience by speaking of their commitment to Jewish values and Israel at the Republican Jewish Coalition forum on Thursday (Dec. 3), but some felt that Donald Trump crossed a line and trafficked in stereotypes.

And while several at the forum, which featured all 14 of the Republicans running for president, spoke vehemently about the need to take on radical Islam, they generally avoided anti-Muslim rhetoric at the event, which occurred as it was still unclear whether the previous day’s workplace shooting by a Muslim couple in San Bernardino, Calif., was linked to any militant movement.

But Trump raised some Jewish listeners’ concern when he repeatedly mentioned the business savvy of his audience, seemingly invoking stereotypes about Jews as dealers and moneymakers, pulling the strings of government.

Trump suggested they would not vote for him because he is funding his own campaign: “I don’t want your money so therefore you’re probably not going to support me,” he said to the audience in the Ronald Reagan Building, a few blocks from the White House. “You want to control your own politician,” he said later in the speech.

“Is there anyone in this room who doesn’t negotiate deals?” he asked at another point, and then answered his own question. “Probably more than any room I’ve ever spoken.”

“I think it is problematic to use negative stereotypes,” William Daroff, who attended the forum and directs the Washington office of the Jewish Federations of North America, said regarding Trump’s remarks.

Among other Trump remarks that raised eyebrows:

— “We’re all good with contracts,” he said, contrasting his audience with the Obama administration.

— “I think you as business people will feel pretty good about this, and respect it,” he said, about how relatively little he was spending on his campaign.

— He said he was “a negotiator, like you folks.”

But not all who heard Trump speak thought he had flirted with anti-Semitic stereotypes.

While the forum was underway, the rival National Jewish Democratic Council tweeted out reminders that Jews overwhelmingly vote for Democrats.

In the last presidential race, for example, Jews voted for President Obama over Mitt Romney by 69 percent to 30 percent.

Trump, generally considered a strong supporter of Israel, was still booed when he refused to commit to moving the American Embassy in Israel from Tel Aviv to Jerusalem, which both Palestinians and Israelis consider their capital.

The audience better appreciated Trump’s references to his daughter Ivanka, who converted to Judaism and observes the Jewish Sabbath.

“You just like me because my daughter happens to be Jewish,” Trump said. “The only bad news is that I can’t get her on Saturday.”

The other candidates at the forum also bragged about their Jewish ties — their friendliness toward Israel and the depth of their friendships with Jews. They critiqued as a danger to Israel the deal the Obama administration and other powers negotiated with Iran this summer. That agreement lifts some sanctions on Iran — whose leaders have threatened to destroy Israel — in exchange for the reining in of its nuclear program.

And while the candidates warned of the dangers of Islamic extremists, they also seemed to avoid rhetoric that would have offended Muslims.

Candidate Ben Carson, the retired neurosurgeon riding high in the polls who has said he would not vote for a Muslim for president, trod carefully in a speech that focused heavily on Middle East politics, a subject about which, his rivals argue, he knows little.

“I will actually be using a script,” he announced before he began his speech. “It may be the first time anybody has seen me doing that.”

Then he drew some laughs for repeatedly mispronouncing the name of the group that rules Gaza and is considered a terrorist group by the U.S.: Hamas. Carson said it a few different ways, but often it sounded as if he was talking about “hummus,” the chickpea dip that is popular in Israel and Arab countries.