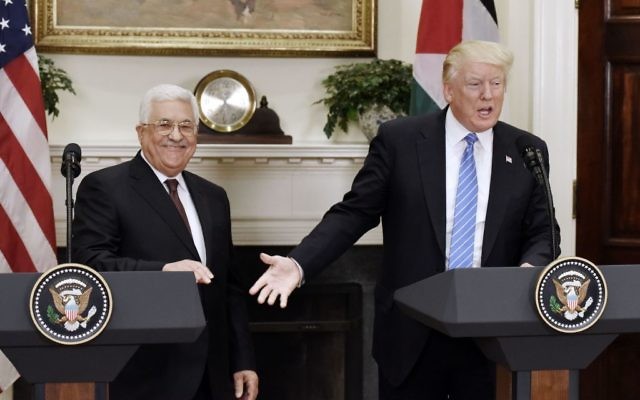 U.S President Donald Trump gives a joint statement with President Mahmoud Abbas of the Palestinian Authority in the Roosevelt Room of the White House on May 3, 2017 in Washington, DC. Getty Images

“I know President Abbas has spoken out against ISIS” and other terrorist groups, Trump said Wednesday at a White House ceremony welcoming Abbas, using one of several acronyms for the Islamic State. “We must continue to build our partnerships with the Palestinian’s security forces to counter and defeat terrorism,” he also said.

“For us to bring about a comprehensive and just peace based on the two-state solution, such matter would give a great impetus to the Arab Peace Initiative and the other international initiatives, as well as be able to fight and deter terrorism and to fight the criminal ISIS group … which has nothing to do with our noble religion,” he said. The Arab Peace Initiative refers to the 2002 Saudi Arabian proposal to trade an Israeli-Palestinian settlement based on the 1967 lines for a comprehensive Israeli peace with most of its Arab neighbors.

Trump has, with the encouragement of Israeli Prime Minister Benjamin Netanyahu, embraced the concept of a broader peace that encompasses both the Palestinians and other Arab neighbors, partly as a means to better confront the threats posed by the Islamic State as well as Iran.

Trump said he was optimistic that he could pull off the deal that has frustrated at least four of his predecessors, with the most recent collapse of talks in 2014 followed by the war between Israel and Hamas in the Gaza Strip.

Abbas’ remarks Wednesday underscored key differences, however; Netanyahu has not embraced the Arab Peace Initiative, in part because of the breadth of its compromise, based on the 1967 lines. Abbas said that the 1967 lines remained the predicate for a peace deal. Abbas’ explicit citation of the two-state solution also suggests a nuanced difference with Trump, who has retreated from 15 years of U.S. policy favoring the two-state outcome.

“I also applaud the Palestinian Authority’s continued security coordination with Israel,” he said. “They get along unbelievably well. I was very impressed and somewhat surprised at how well they get along.”

Trump did not address — at least in the public portion of the meeting — a demand by Netanyahu that Abbas stop Palestinian Authority payments to families of terrorists killed or jailed by Israel. He did call on Abbas to address incitement.

“They can be no lasting peace unless the Palestinian leaders speak in a unified voice against incitement to violence and hate, there’s such hatred, but hopefully there won’t be such hatred for very long,” he said.

Abbas said his government was teaching its young people peace. “We are raising our youth, our children and our grandchildren on a culture of peace,” he said.