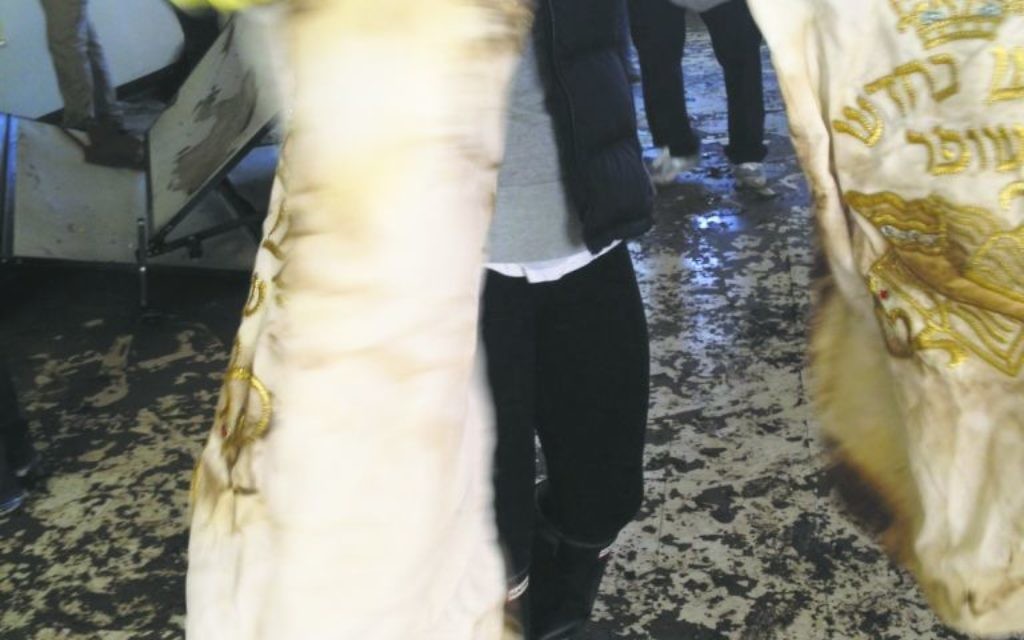 For Jews in the Rockaways struggling to keep their religious communities alive in the wake of Hurricane Sandy, hope is a humble 24-foot-by-60-foot trailer.

It has been nearly two months since the superstorm ravaged the East Coast, damaging or destroying homes and businesses. At least three synagogues in the Rockaways were so badly damaged that they have yet to reopen.

But with the help of UJA-Federation of New York, the Union for Reform Judaism, the Union of Orthodox Jewish Congregations, and the United Synagogue of Conservative Judaism, portable trailers are or will soon be helping the three congregations get back on their feet.

“Until we brought in trailers, it was hard to motivate people — they had no hope,” said Adina Frydman, executive director of SYNERGY: UJA-Federation of NY and Synagogues Together Experience. “The trailers gave them hope that there would be a future for their communities.”

Rabbi Judah Isaacs, director of the OU’s Department of Community Engagement, said the leadership of a gutted synagogue in Belle Harbor, Queens, told him “that if they had to wait until repairs were completed, they wouldn’t have a congregation anymore. The trailer allows the community to function until repairs are done.”

The three crippled synagogues all suffered the same fate:

n The storm surge rushed into Temple Beth El of Rockaway Park, completely filling the basement that housed the ballroom, minyan chapel, kitchen, classrooms, and meeting rooms. Everything was destroyed, including the boiler, according to Rabbi Allan Blaine, the congregation’s spiritual leader for the past 44 years.

Although the main sanctuary on the first floor of this Conservative congregation was untouched, the synagogue has not had electricity or heat and has ceased to function for its 200 families.

n At the West End Temple, a Reform congregation of 100 families in Neponsit, water filled the newly refurbished basement, destroying the new lounge and bathroom, according to Rabbi Marjorie Slome.

The first floor of the synagogue, which is a block and a half from Jamaica Bay and three blocks from the Atlantic Ocean, was also not spared. Some 4 ½ feet of water accumulated there and destroyed everything — sanctuary pews, prayer books, the synagogue office, the library, the kitchen and its appliances, the auditorium stage and the adjoining caretaker’s home.

n The basement of Congregation Ohab Zedek of Belle Harbor, an Orthodox congregation of about 200 families located one block the Atlantic and four blocks from Jamaica Bay, was flooded with a foot of water. The minyan chapel, prayer books, classrooms, the caretaker’s apartment, the electrical panel and a lunchroom were destroyed. For the next month, the congregation failed to function.

The congregation’s spiritual leader, Rabbi Tsvi Selengut, said the 24-foot-by-60-foot trailer arrived about a month ago and that an electrical was hook-up was expedited right before Shabbat on Dec. 8 with the help of Assemblyman Phil Goldfeder.

“The inside of the trailer looks like a house with regular flooring, wallpaper and bathrooms,” Rabbi Selengut said.

Frieda Laufer, a congregant who was able to move back to her home after repairs were made, said being able to pray in the trailer has been “uplifting.”

“It’s beautiful,” she said. “It’s fixed up so nicely, it’s comfortable and it gives those of us who are here a feeling of closeness. We had a big Kiddush for Chanukah. Even some people who have not been able to get back into their homes have come for Shabbat and stayed here with others. There is a definite feeling of togetherness.”

Stanley Liker, the congregation’s president, said that not only has the trailer provided “camaraderie” but it is also “giving everybody strength to help them get through this tragedy. One member, a psychiatrist, who had not come every day now comes daily because he said he feels fortified by it. And the trailer allowed us to resume our Mincha-Maariv [afternoon and evening] minyan everyday.”

The trailer sits in the rear parking lot and is large enough to accommodate about 100 people, a far cry from the 600-seat sanctuary in the synagogue. But Rabbi Selengut said it is sufficient to get the congregation back up and running.

“We daven [pray] three times a day, I hold classes there and we have room for Kiddush on Shabbat,” he said. “We do everything we did in our large building. We put a mechitza [separation] the length of the trailer [in the sanctuary] and near the door we have a social hall for Kiddush and seudat shlishit [third Sabbath meal].

“The trailer is cramped, but at this point not everybody has moved back into their home. Every single house in Belle Harbor lost its boiler and all utilities, without exception. Some will return in the next month, some in the next year. I have not moved back. I’m living [elsewhere] in Queens and go there for Shabbat. When the regulars come back, it will not be big enough.”

In the meantime, Rabbi Selengut said cleanup efforts continue in the 50-year-old synagogue building, which he said sustained more than $1 million in damage.

“We’re trying to get the electric panel ready so we can electricity back to the top floor where the sanctuary is,” the rabbi noted. “The bottom floor is totally destroyed.”

Rabbi Blaine said his synagogue’s trailer arrived within the last few days and that he hopes to have plumbing and electricity hooked up in time for Sabbath services this weekend.

“We have not been able to hold services and have been communicating with people by e-mail,” he said. “We’ve been trying to bolster their morale and tell them what we have accomplished. We have e-mails for about 150 of our 200 members, and we are asking members to contact those who are not Internet savvy.”

He said many of his older congregants — the median age of the congregation is about 60 — moved in with their children after the storm and that “it will take a long time to repair their homes.”

Rabbi Blaine confided that he does not know how many may decide never to move back.

“People are so overwhelmed with the damage to their homes,” he said. “They have to get the water out, take care of the mold and then reconstruct. The entire community is still in shock; a lot of stores have not reopened. It’s almost like a ghost town.”

Rabbi Slome said she is hopeful that a 14-foot-by-60-foot trailer will arrive soon for her Neponsit congregation. Sruli Muller, vice president of Nadler Modular in Spring Valley, N.Y., said the rabbi ordered the trailer late last week and that he is awaiting funding approval from UJA-Federation. He said the three trailers are being rented for from six to 12 months at an average cost of $900 a month. Delivery and installation is another $12,000.

Rabbi Slome said that before Sandy arrived, she removed all six of the congregation’s Torahs, just as she had in advance of Hurricane Irene last year.

“I took them and put them on a pool table in my basement in Prospect Park South,” she said. “Why didn’t I think about removing the siddurim [prayer books] and chumashim [printed form of the Torah]? The irony is that the only place in the synagogue that was really dry was the ark.”

A week after the storm, the congregation held services in a nearby church and a week later went back to the synagogue. But mold, the lack of electricity and heat drove them out of the building two weeks later and they have not returned. Sabbath services have been held in a congregant’s home but they have yet to get a minyan, Rabbi Slome said.

She added that the congregation has “$1 million in flood insurance, but the damage is way more than $1 million.”

Alisa Kurshan, a senior vice president at UJA-Federation, said that in addition to working with the denominational movements to help pay for the cost of the trailers, her organization gave $5,000 each to 78 rabbis whose synagogues were in the flood zone in Brooklyn, Queens, Staten Island and Long Island.

That money came from a $10 million grant from the organization’s reserve fund. A fundraising campaign has raised another $4.2 million. Kurshan said that to date $13.8 million has been spent to help with Sandy-related expenses.

“We have focused on areas where we are best able to provide support,” she said. “We are trying to be helpful in every way to enable all synagogues to access funds, including insurance. In addition, we are providing legal and trauma support.”

Frydman pointed out that UJA-Federation just gave 34 synagogues in the affected areas a total of $500,000 to reimburse them for the relief work they performed.

“People wanted a place to go that was warm and caring and that could give them a warm meal and let them power up their phone,” she said. “These synagogues mobilized to do that. Some even rented vans and hired additional staff or paid staff overtime to help. They were our partners in providing critical relief.”