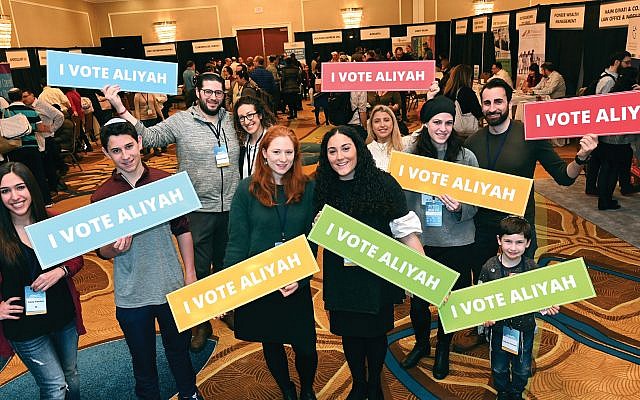 With anti-Semitism on the rise in the U.S. — both from the right and left — since 2016, you might think some Jews would pack their bags and head to Israel. (It’s what has happened in France, as anti-Semitism has spiked in recent years.)

But when it comes to the States, you’d be wrong, said Rabbi Yehoshua Fass, who has helped facilitate the aliyah of nearly 60,000 Jews from the U.S. and Canada.

Rabbi Fass, a co-founder and executive director of Nefesh B’Nefesh (Hebrew for Soul to Soul), an NGO that has assumed responsibility for a wide range of aliyah-promotion activities for more than a decade, including the sponsorship of charter flights of immigrants, said this week that political events in this country have a negligible effect on most Jews’ interest in settling in the Jewish state.

“We underestimate the power of inertia,” the desire of people to stay where they live and work, said Rabbi Fass. The rabbi, who was here to take part in a series of aliyah fairs in the U.S. and Canada, and to speak at a briefing for U.S. and Israeli journalists at the midtown headquarters of UJA-Federation of New York, said Nefesh B’Nefesh has witnessed “no spike in applications during the increasingly uncivil level of political discourse in this country during the past two years, or after 9/11 in 2001.

Aliyah from North America has remained constant, approaching 4,000 per year over the past decade, the rabbi said. The 2018 figure was 3,550.

While Modern Orthodox families are largely motivated by reasons of religion or Zionism, most singles make aliyah because they were inspired by a Birthright Israel trip, or were active in anti-BDS activities on their campus, or see better professional opportunities in Israel, Rabbi Fass said.

Nefesh B’Nefesh needs a different promotional pitch for each group, he said.

The organization’s follow-up activities in Israel for new immigrants, largely conducted by recent immigrants — “We know the difficulties, we know the challenges,” Fass said — include assistance with finding employment, guidance in steering through Israeli bureaucracy, Hebrew-language help for young children, and an outreach to Lone Soldiers.

The rabbi, who was ordained by Yeshiva University and served at a congregation in Boca Raton, Fla., before making aliyah with his family, called Nefesh B’Nefesh’s mission “mak[ing] aliyah more feasible.”

“It’s very hard work,” said Meir Abergel, an editor at Israel’s Yediot Achronot newspaper who was part of a delegation of a half-dozen Israeli journalists that accompanied Nefesh B’Nefesh staffers here to see the organization’s work and meet with U.S. Jews.

In meetings with students at Hebrew schools and day schools, Abergel said he understood the gap between Israelis and U.S. Jews, and the unlikelihood of many Jews here to make aliyah.

“When we began the organization, the concept of aliyah was not on the radar or in the plans of many North American Jews,” Rabbi Fass said. “However, today there is general support and acceptance across the board for aliyah — as it has turned into a viable option for many.”