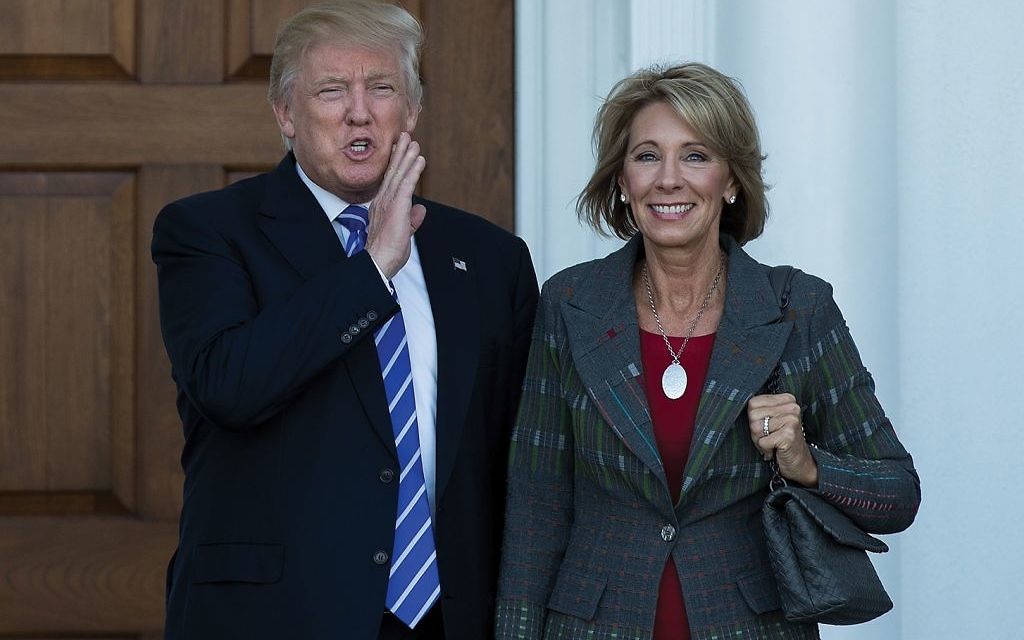 President-elect Donald Trump has backed away from a number of campaign pledges, including pursuing the prosecution of Hillary Clinton and withdrawing from the Paris climate accord. But his nomination of Betsy DeVos to be education secretary suggests he is proceeding with his proposed $20 billion school voucher program, much to the delight of Jewish day schools.

“We’re very excited about her being nominated,” said Rabbi A.D. Motzen, national director for state relations at the charedi umbrella group Agudath Israel of America. “She would be a secretary who is focused on students and not where they attend school. All parents should be happy about that.”

DeVos is seen as the primary spark behind the school choice movement that since 2000 has seen the creation of school voucher programs in 13 states.

Similarly, Nathan Diament, executive director for public policy at the Union of Orthodox Jewish Congregations of America, said Trump “has chosen someone who has a track record and a deep commitment to the school choice agenda, and if she is confirmed [by the Senate] we expect it will be an agenda strongly pursued by the new administration.”

But if what has happened in New York State is any barometer, vouchers will have difficulty winning approval from Congress, which has already rejected them several times. For several years, Gov. Andrew Cuomo and the State Senate have sought to establish tuition tax credits for private schools, but the State Assembly has continually balked.

The teachers’ union, as well as those who believe the shifting of state funds to non-public schools threatens public education, adamantly opposes the move. In addition, critics point out that some charedi yeshivas pay scant attention to reading, writing and arithmetic, and graduate students ill-equipped to earn a living.

Tuition tax credits are “just not that politically popular,” according to Billy Easton, executive director of the Alliance for Quality Education. “This year, pro-tax credit people ran a campaign to try to oust a number of Assembly members, and it was an utter failure,” he observed.

Easton said his organization opposes tuition tax credits because it is “basically a diversion of money from the public schools.”

If the Senate confirms DeVos and she seeks to push vouchers, he predicted it would simply “stir up more opposition.”

Diament said the Orthodox Union “will be working to shape the [administration’s] initiatives so that they benefit American children in general and students and families in the Jewish community in particular.”

In the Jewish community, parents of children in day schools and yeshivas struggle both with high tuition and taxes, which fund public schools.

Some 90 percent of the money used to fund kindergarten through 12th grade schools in the U.S. comes from state and local governments; the remainder is from the federal government.

The Trump administration would add even more federal dollars to education. According to its website, it would reprioritize $20 billion in federal funds and direct them towards school choice for the 11 million school children now living in poverty. States would then have the option of allowing these funds to follow a child to his or her choice of public or private school. States with laws that promote vouchers, magnet schools and charter schools would be “favored” in the federal distribution of grants, just as President Barack Obama’s Race to the Top involved states competing for federal dollars if they agreed to such Obama-preferred reforms as holding teachers accountable for students’ performance.

Diament said the $20 billion in federal funds would need to be approved by Congress. Maggie Garrett, legislative director of Americans United for Separation of Church and State, said the plan is part of Trump’s first 100-day agenda but that he has offered “no details of where the money will be coming from.”

Today, the only federally funded voucher program in the country is in Washington, D.C. The district has 48,439 students, of which 1,244 attend non-public schools using federal vouchers.

The program was started in 2003 as a five-year pilot program and was reauthorized in 2011 for another five years. It receives $20 million annually in federal money, but Garrett said it is unclear whether Congress will renew it next year.

“The Department of Education has done four studies and found that there was no statistically significant improvement in reading and math scores [of non-public school students], but there are significant accountability problems,” she explained.

DeVos’ nomination, Garrett said, is troubling for her organization because DeVos has “no experience in public education and instead has focused on privatizing public education. We believe that public tax dollars should be spent on public schools that are open to all students.”

Vouchers, she added, are “bad education policy, violate fundamental principles of religious freedom [and amount to] taxpayer dollars funding religious education. We believe that no one should be forced to pay for someone else’s religious education. Religious schools usually intertwine religious and secular subjects, and that is why it is problematic.”

But Phil Goldfeder, assistant vice president of government relations at Yeshiva University, said he hopes DeVos “will offer creative solutions and support for diverse education options that will give our parents and families the peace of mind they deserve. … Every child in New York State and across the country deserves access to quality schooling.”

Rabbi Motzen of Agudath Israel noted that federal funds are already being used in behalf of the estimated 250,000 Jewish students who attend Jewish day schools in the United States.

“There are Title 1 federal funds that provide remedial help in reading and math and federal funds for special needs students,” he said. “In addition, every state has different programs” they fund for private schools.

“Some have vouchers like Ohio and Indiana, where students get between $4,000 and $6,000 for tuition,” Rabbi Motzen said. “In Ohio, they get $4,650 for elementary school students and $6,000 for high school students. Assistance is based on whether the student is low-income or is in a district that has a low-performing public school.

“Twenty-five states have some kind of scholarship program,” the rabbi said. “In Ohio, the maximum is $27,000 for students with certain disabilities. Some states that don’t offer scholarships might provide busing. Our estimate of state and federal funding going to Jewish day schools is well over $500 million.”

New York State pays for busing to private schools, remedial help and reimbursement for state-mandated services, such as taking attendance, the paperwork needed for student immunizations and the taking of state-required tests.