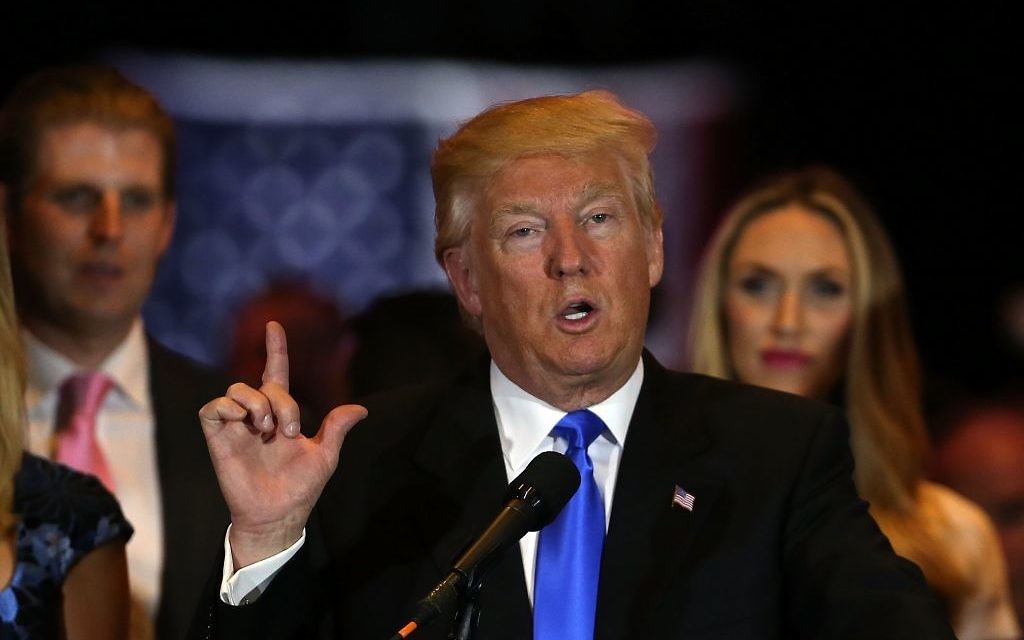 Some prominent Jewish Republicans have begun cautiously throwing their support — however tepid — to Donald Trump, the presumptive Republican presidential nominee after his two remaining competitors dropped out. But many want to hear from him more on several key issues.

“Our alternative to Donald Trump at this point is a Democrat in the White House, and I don’t think any of us are supportive of that,” said Fred Zeidman of Houston, a major Republican donor who had previously backed former Florida Gov. Jeb Bush.

But he added that he still needed to have a “conversation with Mr. Trump to get a more definitive view of his position on issues important to us. And to me, the most important issue is the safety and security of Israel. His last statements have been very positive — I just need him to reinforce them and make sure he understands our issues and that he is as supportive as he needs to be.”

In an interview with the Daily Mail this week, Trump signaled that he would favor expanded Israeli settlement building in the West Bank.

“I think he will be fine, but we need to sit down and be comfortable with him,” Zeidman added, using the royal “we.” “Now that he is running against Hillary Clinton, we will get a better definition [of his stance on different issues]. … To me, sitting out this race will be supporting a Democratic candidate.”

Jay Lefkowitz, who served as President George W. Bush’s special envoy for human rights in North Korea, said he “would expect that unless Donald Trump says or does something that is seen as particularly egregious vis-a-vis Israeli interests, a solid group of Jewish Republicans will vote Republican — even if Donald Trump is at the head of ticket.

“I guess some people will sit on their hands [on Election Day], but my guess is that Trump will reach out and try to galvanize the party more broadly. But at the end of the day, sitting on one’s hands is a protest and not an affirmative activity in a democracy.”

The only two living former Republican presidents, George H. W. Bush and George W. Bush, have both said through a spokesman that they are taking no role in the election and are not endorsing any candidate. Jeb Bush has also not endorsed Trump.

But the only Jewish Republican in the House, Lee Zeldin, whose First Congressional District encompasses the most easterly portions of Long Island, said he is supporting Trump and would campaign with him.

“If he comes to the First for a campaign event to raise awareness for a positive message to move our country forward, I would want to be part of that,” he said.

“If the election was held today, he would blow out Hillary Clinton” in the First CD, Zeldin added.

The district has about 30,000 more registered Republicans and Conservatives combined than Democrats, Zeldin noted. In fact, in 1978 it elected to the House William Carney, a Conservative Party candidate who won the Republican primary and general election and then caucused with the Republicans. He was re-elected four times and decided not to run for re-election in 1986.

Asked if he was supporting Trump because he had promised to support the Republican nominee, Zeldin said: “He is by far a much better candidate for president than Hillary Clinton. I would have endorsed someone earlier if I did not believe there was a lot of talent all across the [Republican debate] stage.”

But Zeldin cautioned that Trump “can’t rest on the lead in the First alone if he is going to win the White House. There are 434 districts in the country.”

Regarding the Jewish vote, he said Jews traditionally vote for the Democratic candidate in presidential elections but that Republicans have been gathering increasing support in recent elections. Zeldin said he is looking to Trump to speak about “Israel, our greatest ally in the Middle East.”

“President Obama is finishing a second term in which he has been treating Israel like Iran and Iran like Israel,” he said. “We have to get back to treating enemies as enemies — they only understand strength and a more consistent foreign policy. We have to tackle the growing BDS [boycott, divestment and sanctions] movement [against Israel] on college campuses, in the workplace and in the world. He needs to talk about these issues and state a philosophy and offer solutions.”

Nick Muzin, an Orthodox Jew who served as Sen. Ted Cruz’s campaign adviser and is also his deputy chief of staff, said he has not yet decided whether to support Trump.

“I am a Republican and want to vote for the Republican nominee, but Mr. Trump still has to prove himself,” he said. “Trump knows a lot of Jewish people, his daughter is Jewish, but he does not have a real depth of knowledge yet about the Middle East. Hopefully he would be good and will have good people around him. But I’m going to wait. … I would want to meet with him, if and when Sen. Cruz is ready to meet with him.”

The latest Siena Research Poll of Jewish voters in New York released Tuesday found that more than three-quarters — 77 percent — view Trump unfavorably. Only 19 percent have a favorable opinion of him. Clinton, on the other hand, has a favorability rating of 57 percent with Jewish voters (up from 37 percent in February) and an unfavorable rating of 42 percent, down from 53 percent in February.
In a head-to-head contest, Jews preferred Clinton over Trump by 62 percent to 23 percent. Among all voters in New York State, Clinton leads Trump 56 to 30 percent.

He made no further comment about Trump, but rather lashed into Clinton, saying: “Throughout the course of this long campaign among Republicans there has been unity in the belief that Hillary Clinton is the worst possible choice for a commander in chief. Secretary Clinton has proven time and again through her record and her policies that her candidacy will compromise our national security, weaken our economy and further strain our relationship with our greatest ally Israel.”

Kenneth Bialkin, a member of the RJC board, said he is taking a wait-and-see attitude before endorsing a presidential candidate.
“It’s very early in the political season to know what developments may occur that would have an important influence” on the election, he said. “There is no need to make a commitment at this time.”

The website Right Wing Watch posted a story Wednesday that said white nationalists were taking a “victory lap” following Trump’s Republican victory. It noted that the neo-Nazi website Daily Stormer wrote: “White men in America and across the planet are partying like it’s 1999 following Trump’s decisive victory over the evil enemies of our race.” It noted also: “The Jews are in full-on freak-out mode.”

Right Wing Watch pointed out also that former Ku Klux Klan leader David Duke said on his radio show that Trump is taking on, in Duke’s words, “the Jewish supremacists who control our country.” He said also that he loved the parody of a movie being circulated by white nationalists that features Trump killing Jewish and Democratic figures.

Duke was quoted as saying it is high time “to start naming the enemy that’s orchestrating our destruction: If we don’t dispose the Jews, there is no hope for our people.” He added that Jews “control” the media, academia and the political world, “and I think that we’ve really go to start going full bore on that.”

During the campaign, Trump had inconsistent comments about Duke. He at first said he rejects him, then a few days later said he had never heard of him nor met him. The next day, he said he had trouble hearing the question.

On Thursday, the Anti-Defamation League called on Trump to “make unequivocally clear [that] anti-Semitism has no place in presidential politics or American society.”

“David Duke’s latest remarks — smearing Jews and Jewish Republicans specifically — are as unsurprising as they are hateful,” said Jonathan Greenblatt, ADL’s CEO. “The onus is now on Donald Trump to make unequivocally clear he rejects those sentiments and that there is no room for Duke and anti-Semitism in his campaign and in society. Mr. Trump can and should speak up now. If not, his silence will speak volumes.”

Lefkowitz, the former aide to George W. Bush, said he too believes Trump must make it “very, very clear that he has no use for extreme right-wing nationalists of that ilk.” If he doesn’t, “it will cause him enormous problems not only with Jewish voters, but he would effectively be unelectable. … It is important when running for president to say not only who you are for but who you are against.”

But Trump refused to criticize people who hurled anti-Semitic epithets in phone calls and on-line to a Jewish reporter who wrote an article in GQ about Trump’s wife, Melania.

Asked by CNN Wednesday whether he had a message to “these fans” who sent such hate-filled messages, Trump replied: “I don’t have a message to the fans.”