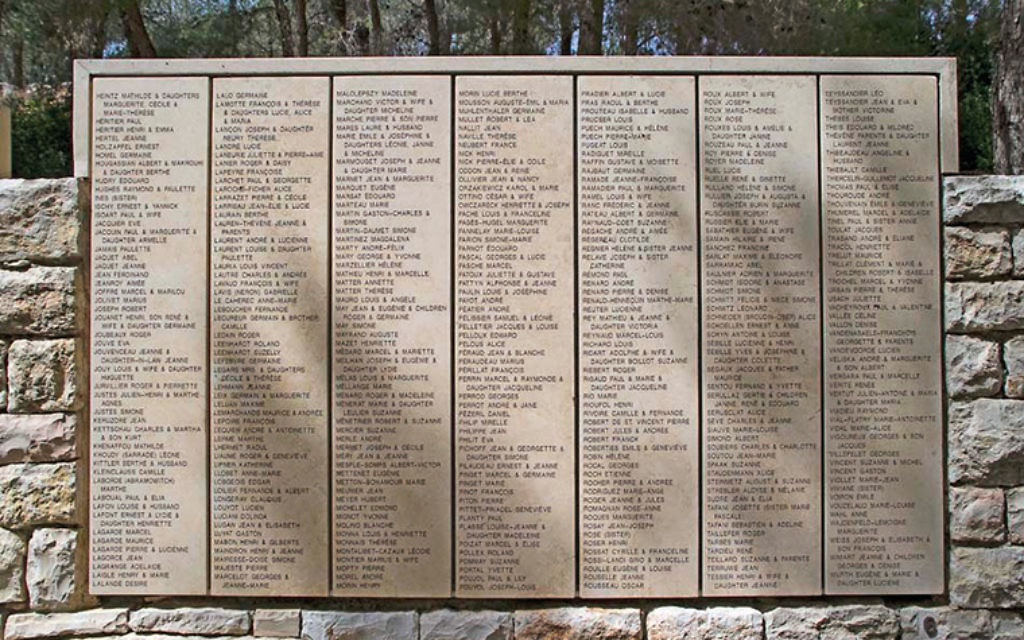 Jerusalem — It’s a race against the clock, and against flagging memories.

But for the historical researchers — detectives, really — at Yad Vashem, Israel’s Holocaust memorial, museum and national archive, technology is giving them a big leg up in the race to identify and vet the stories of Righteous Gentiles.

When Yad Vashem completed the monumental job of digitizing its Righteous Among the Nations database three years ago, staffers and volunteers began to focus more of their attention on the hundreds of “open” Righteous Gentile applications in Yad Vashem’s archives.

Many of these applications were submitted before the invention of the Internet, the advent of cheap overseas phone calls from Israel, and the widespread digitization of catalogues from archival sources all over the world.

These old files come on top of the hundreds of new applications Yad Vashem receives every year from Jews and non-Jews who hope the facility will recognize a certain person or group of people as Righteous Among the Nations.

As Israel commemorated Yom HaShoah, Holocaust Remembrance Day, this week, Yad Vashem’s researchers say they feel a mounting sense of urgency to speak to as many survivors as possible, before it is too late.

“Some of them never submitted a testimony. In other cases they submitted testimonies but Yad Vashem’s researchers have certain questions related specifically to Righteous Among the Nations criteria. These aren’t necessarily the questions they were asked when they were interviewed.

“As the survivor generation is sadly leaving us, it’s very urgent to hear their stories,” Irena Steinfeldt, director of the Righteous Among the Nation’s department, told The Jewish Week. Unless those testimonies are recorded for posterity, “they will linger only in their memories and will disappear with them.”

Yad Vashem has recognized more than 26,000 non-Jews as Righteous Gentiles, and annually adds another 400 to 450 to the honor roll.

Only those who took “great risks to save Jews” are eligible for the designation of Righteous Among the Nations, Steinfeldt said. If the condition for rescue was payment or that Jews convert to Christianity, or if a non-Jewish couple decided to save a Jewish child because they were childless and wanted to adopt a child, the rescuer will not be honored and the file will be closed.

Even if a person fits the criteria, they won’t make it to the list unless the applicant can provide proof to back up the narrative.

“There must be evidence,” Steinfeldt said. “This evidence is based entirely on primary sources. If someone writes, ‘my grandfather saved Jews’ but cannot provide the necessary evidence, the grandfather won’t be honored. “It doesn’t mean we don’t believe him, but we rely only on evidence. People won’t give me a Nobel Prize just because my daughter says I deserve one.”

Although most inquiries are not referred to the Commission for the Designation of the Righteous due to a nominee’s ineligibility or lack of concrete evidence, Steinfeldt said, “we tell them that whatever was written will be preserved in our archives.”

Thanks to digitization, it is now easier to track down whatever archival documents, survivor testimonies and memoirs have been compiled during the past 70-plus years.

“We had a case this past year,” Steinfeldt recalled. “There was a German” — Max Nagler — “who wrote a letter to Yad Vashem in 1968, saying he saved the Arzewski family. He said he had served as a semi-military post office official stationed in Krakow.”

Yad Vashem kept the file open in the hopes of one day locating the Arzewski family and hearing their testimonies.

When Steinfeldt searched Yad Vashem’s now-digitized archives she discovered three short testimonies the Arzewski’s had submitted to the Jewish Historical Committee soon after the war ended. The testimonies mentioned Nagler.

Next, Steinfeldt searched the Shoah Foundation collection of testimonies and found one, from the 1990s, submitted by Michael Arzewski, who was 7 years old when the Holocaust ended.

“Michael described how they were hidden by this man and the man, in his letter, remembered the little boy was gifted in music.”

A Google search revealed that Arzewski lives in Brooklyn and that he is a successful musician.

“The rescuer had died but I wrote to the municipality of his German town, and they said his son had moved to another place,” said Steinfeldt. “We found the son, who remembered that the father of the Jewish family visited his father after the war, in Munich.”

Although the original Arzewski testimonies were submitted in the mid-40s, it was not until the archives were digitalized that it became possible to confirm that Nagler did indeed provide safe haven to the Jewish family out of the goodness of his heart.

Reached by telephone in New York, Michael Arzewski told The Jewish Week that he is “very happy” that Yad Vashem will honor Nagler.

“He deserves all the credit in the world. He had a hard life. After the war the Russians sent him to a POW camp,” he said.

Steinfeldt said the number of Righteous Among the Nations inquiries hasn’t faltered, despite the ever-shrinking number of survivors, the vast majority of whom are now in their 80s and 90s.

She said that the number of people contacting Yad Vashem soared in the 1990s, following the collapse of the Soviet Union, when more than 1 million Jews moved to Israel and identifying as a Jew was no longer a crime.

“Many survivors came forward. At that time there could have been as many as 1,000 applications or queries a year.”

Those who would like Yad Vashem to consider a candidate for Righteous Gentile status can apply by writing to the Righteous Among the Nations department at Yad Vashem (righteous.nations@yadvashem.org.il; P.O.B. 3477

“Every story has its unique nature,” Steinfeldt said. “Sometimes people send us long accounts, some write one line and we begin to ask them questions.”

Thumbing through an old open file — papers collected in a cardboard folder — the research director said her team’s job “is half historical research and half detective work.”

“We don’t leave a stone unturned,” Steinfeldt continued, “in our determination to pay tribute to the rescuers and to salvage the stories of the rescued.”