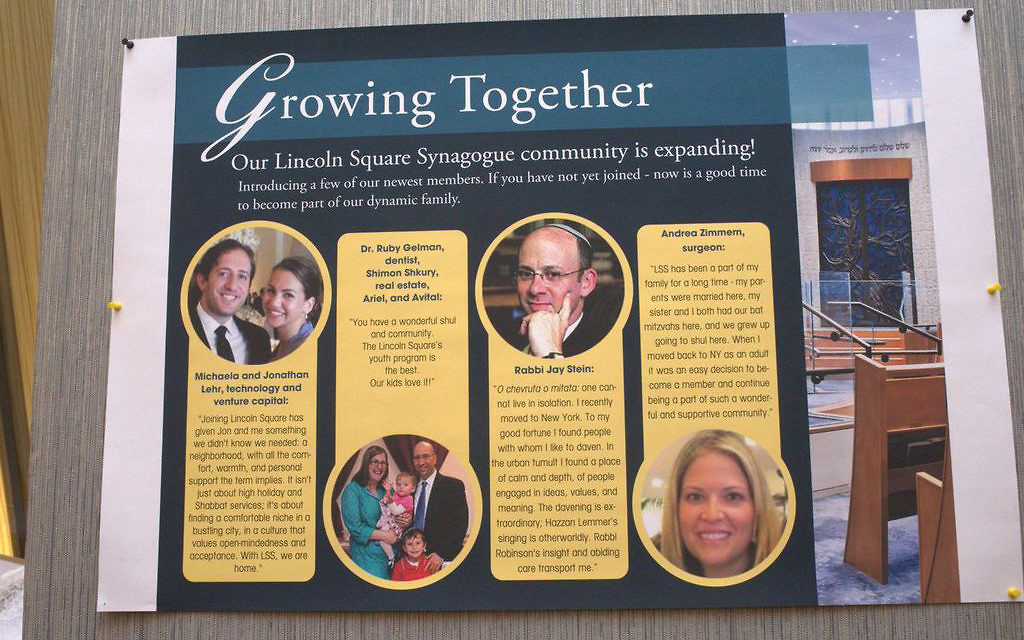 Michaela and Jonathan Lehr, a newly married couple who moved to the Upper West Side in May, figured they would attend worship services at one of the neighborhood’s many Modern Orthodox synagogues but didn’t plan to join one. “Our lives are so busy,” said Michaela, 25, who works on the finance team of a startup.

Then friends invited her and her husband, who is 28, to Lincoln Square Synagogue one Shabbat morning.

The Lehrs felt at home; they decided to join the congregation.

“I really enjoyed the community,” Michaela said. “I really liked the extreme open-mindedness. I wanted a shul where my parents,” natives of the former Soviet Union, “who are not religious, would feel comfortable.”

“People know your name, they recognize you,” she said. “It’s a pretty universal feeling among young couples we’ve spoken with.”

In bid to regain some of its luster — an effort seen as strategic or financially misguided, depending on whom you talk to — the synagogue moved last January into a new, architecturally striking building. The three-story site, with an undulating façade and a horseshoe-shaped sanctuary with 613 ceiling lights, is just 100 yards south of its 40-year-old site at Amsterdam Avenue and West 69th Street, which the congregation had outgrown.

When construction costs of the new building — the first major synagogue built in Manhattan in a half-century — escalated from an estimated $20-$25 million to about $50 million, Lincoln Square became subject to extensive curiosity, and criticism both inside and outside the congregation. Construction dragged on for seven years, and was temporarily halted when funds ran out.

An anonymous donation of $20 million three years ago saved the project. Today, a year after the building’s completion, a number of young couples like the Lehrs are joining and becoming active in the congregation.

The remaining debt on the construction project, which is virtually complete, is in “the low seven figures,” and Lincoln Square has begun to hold “more fundraising events,” in addition to a new membership campaign, said Lloyd Epstein, president of the congregation. “The viability of the shul is not in jeopardy,” he added. “There’s nothing in jeopardy.”

Color posters with pictures and small profiles of some new members are on display in the lobby. And there is an aggressive effort to turn curious visitors from the neighborhood into dues-paying members.

The rabbi noted that attendance at worship services, learning programs and other synagogue programs have similarly increased.

Elana Stein Hain, the congregation’s community scholar, said she senses “a renewed sense of investment and engagement … increased volunteerism for our causes. These people … run our welcoming committee, they chair our young professionals lunches, they get involved in our film club and our youth department.”

The shul’s dues structure has not changed in the last year, according to executive director Ben Keil. It is $900 for singles, $1,900 for families.

By attracting new members, “we’ve spread out the cost,” he said.

One sign of growth — old-time members report seeing more strollers in the lobby on Shabbat. Keil says the synagogue’s Shabbat morning youth program has jumped from about 30 students last fall to about 100 this fall.

“There are definitely [more] young singles who come, but they’re targeting” young couples as well, said Judith Sabba, 29, who joined Lincoln Square a year ago with her husband, Daniel, 30. Residents of the Upper West Side for four years, they had worshipped at other Modern Orthodox synagogues in the neighborhood, but were invited by friends to try LSS one Shabbat and never left.

Strangers talked to her that first day, introduced themselves, and invited the young couple to their homes for a Shabbat meal, said Judith, who works in finance. “That is a very unusual experience” in shul in Manhattan, she said. “That’s representative of what ‘community’ is. It’s not just a place you go to on Shabbos.”

The Sabbas have become active members of the congregation’s young leadership educational activities.

Part of the increase in the number of people attending Lincoln Square activities is because of the new building. And part of it is demographics. More young families and empty nesters have moved into the Lincoln Square area over the last few years as the economy has improved. The overall neighborhood’s Jewish population grew by about 10,000, to 70,000, according to UJA-Federation’s 2011 Jewish Community Study.

“Every shul on the Upper West Side is growing,” Rabbi Robinson said.

The congregation will mark the first anniversary of the new building in January as members and leaders ponder the price of success.

Income generated from outside organizations that hold events in the 50,000-square-foot building will pay much of the synagogue’s expenses, its leaders say. They declined to give specific financial figures but noted that a special needs school will begin leasing the third floor next year, and that the basement ballroom is leased to the upscale Prime Grill caterers.

Some members of the congregation who are critical of the multi-million-dollar expenditure concede that Lincoln Square, which had suffered a decline in morale and membership over the years as the old building deteriorated, is experiencing a revival.

“There was a lot of derision” a few years ago, said Gloria Kestenbaum, a longtime member and spokeswoman for the congregation. People would tell her, “No shul is worth that.”

“I don’t hear that anymore,” she said, though there are still rumblings from those upset by the high cost.

Some complain that events held in the ballroom must use Prime Grill’s catering, which is pricey.

The new building, designed by CetraRuddy, is some 30 percent bigger than the space at the old site. It is safer, environmentally friendly, handicapped-accessible and architecturally innovative, featuring seats made from cedar from Lebanon, a 5,000-square-foot glass façade, along with the symbolic 613 lights in the sanctuary ceiling. Besides the sanctuary, every space in the building is “multi-functional,” Rabbi Robinson said.

“It’s hard to answer that question,” replied the well-liked rabbi, who has served there eight years. “We’re determined to make it worth every penny.”

That means the addition and expansion of activities for the various age and interest groups the congregation is seeking to attract.

Lincoln Square has added a new director of teen activities and hired a new cantor as founding Cantor Sherwood Goffin reduces his schedule. Additional activities include a course for attorneys on Jewish law and one for people who have converted to Judaism, and a learning program for young professionals.

The new building was conceived in part to put Lincoln Square, at one time the neighborhood’s “hot” Orthodox congregation for young singles, back on the map.

“We’re in a nice sense a victim of our own success,” said Glenn Richter, veteran Lincoln Square member and community activist. “The programs and attitudes pioneered under Rabbi [Shlomo] Riskin have been duplicated at many other Orthodox synagogues in Manhattan.”

Steven Bayme, national director of the American Jewish Committee’s Contemporary Jewish Life Department, noted that as Orthodoxy experienced “a resurgence on the West Side, there naturally developed several competitors.

“There is no reason why a rebuilt and reinvigorated Lincoln Square cannot serve as an attractive hub and center for Modern Orthodoxy at its finest.”

The current in-vogue shuls on the Upper West Side, residents of the area say, include Young Israel, The Jewish Center, West Side Institutional Synagogue and Ohab Zedek.

Gloria Kestenbaum offers one reason why she believes Lincoln Square is back. For many years she was always able to find a seat where she wanted in the sanctuary’s women’s section — near her friends — even if she came late to services.

Since the move, she says, seats on both sides of the mechitza are at a premium.

She’ll keeping coming after services have started, though, adding: “I’ll sit in the back.”