HAIM (rhymes with time), a band made up of three Jewish sisters, released their second album, “Something to Tell You,” this month. Following up on their 2013 debut album “Days Are Gone,” which also received rave reviews, their latest album received has made a buzz in the mainstream music scene.

Their sound is unique, blending pop and soft rock with influences from the 70s and 80s, and nods to Michael Jackson.

The three sisters–Alana, Danielle, and Este–got their start playing backup for their parents, Donna and Israeli-born Moti, in the family band, Rockinhaim. The trio started gaining steam after opening for Mumford & Sons and Florence and the Machine in 2012 and released their first album, “Days Are Gone,” four years ago. They are about to embark on their second tour, with shows in Australia, the United Kingdom, Canada, and the US. 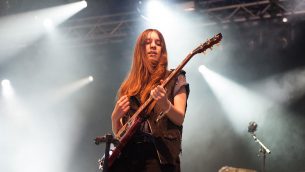 The sisters hail from the San Fernando Valley in California, where Alana and Este still live. Their father taught them to play the drums at a young age, eventually moving on to piano lessons with each picking up other instruments along the way. Este, 31, plays bass, Danielle, 28, plays guitar and serves as lead vocalist, and Alana, 25, plays guitar and keyboard.

Slightly softer and breezier than their debut album, “Something to Tell You” is exactly the kind of pop you want to listen to in the summer. Their music videos alternate between kitschy and straight-forward, showcasing the sisters’ synchronized 80s dance moves and elaborate hair flipping.

They reportedly started off as an unknown band, playing a Jewish deli in Hollywood where they were paid in matzah ball soup. Though not religious, the band will not perform on Shabbat and the sisters have said that they miss their mother’s sweet noodle kugel while on the road. With their father’s parents still living in Israel, the sisters have said they dream of performing there but currently have no shows planned in the country.