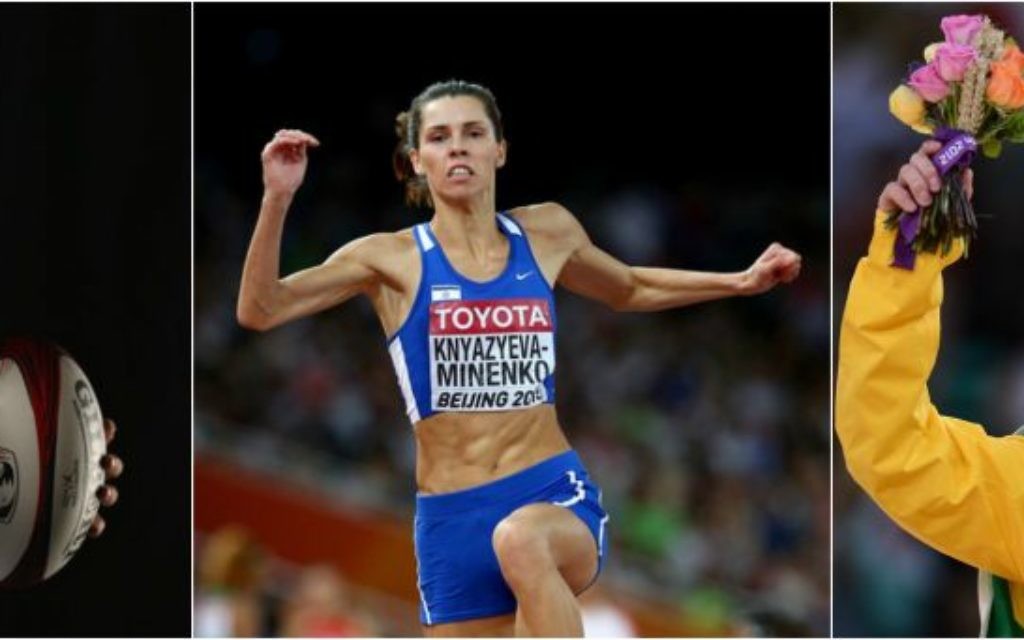 Zack Test, Hanna Knyazyeva-Minenko and Felipe Kitadai are set to make a jump, kick and swing into this year's RIO Olympics.

Unlike many U.S. athletes who were introduced late in life to sports that are

relatively obscure in this country, Zack Test grew up with rugby.

“I watched it my whole life,” said Test, 26, a native of Woodside, Calif., whose father was a former rugby player and an avid rugby fan.

The life of a professional rugby player appealed to him. “You get to travel and see the world.”

Test, who played the sport in high school and earned a football scholarship at the University of Oregon before transferring to a college in England in order to concentrate on his rugby development, is a top-ranked international star in the rugged sport that is returning this year to the Olympics, after a more than 90-year absence.

He also has participated in the Maccabiah Games and the Pan American Games, winning a bronze medal each time.

The Olympic version of rugby features seven players on each side, which requires greater stamina and athleticism than the 15-player sport. “It’s a fast game,” Test said.

He has played both versions. Well-known in rugby circles, he has a Nike endorsement deal.

At 6-foot-3 and 205 pounds, Test, who lives in San Diego, has the ideal build for the sport that includes the tackling of U.S. football but not the pads or other protective equipment. Which appeals to him: “You get to tackle people.”

Injuries? “A broken ankle.” Smashed fingers. A broken nose, “here and there.” The list goes on.

Test, whose sister made aliyah four years ago, said he tries to keep kosher on the road “the best I can.” He speaks “a little bit” of Hebrew.

He said his decision to concentrate on rugby instead of football means that he will not realize another childhood dream – to play in the NFL, and win a Super Bowl. But sports will remain in his future after he retires from competitive rugby. He hopes to become a professional golfer. “It’s my main hobby.”

Hanna Knyazyeva-Minenko has already taken part in the Olympics.

She finished in fourth place in the triple jump in the 2012 London Games, competing for her native Ukraine.

This time, she’s an Israeli.

Knyazyeva-Minenko, 27, moved to Israel after meeting Israel’s Anatoly Minenko, a decathlon athlete, at a training camp in Ukraine in 2012, falling in love and getting married. Traveling back and forth between Israel and Ukraine became difficult for the couple.

Settling in Israel and competing for her new land of citizenship “was not a hard decision for me,” she told The Jewish Week in a telephone interview from her home in Herzliya. She’s already competed successfully for Israel — winning a silver medal at the 2015 World Championship in Beijing (Israel’s first-ever podium appearance by a female athlete in that competition) and setting an Israeli record.

She’s learning Hebrew, and the culture of her adopted land. At first, “everything was really strange.”

Her second-place finish at Beijing last year has quickly brought her fame and acceptance in Israel, she said. “I am proud to represent Israel at competition.”

This time, she said, she hopes to bring a medal back to Israel.

As Jewish athletes travel from all over the world (from Israel and Australia to the Ukraine and the U.S.) to compete in the 2016 Summer Olympics in Rio de Janeiro, at least one Jewish Olympian won’t have to leave his country to make it to the Games.

The sole Jewish representative on the host nation’s Olympic roster, judo competitor Felipe Kitadai, is participating in his second consecutive Olympics, having medaled in 2012.

Kitadai is competing in the lightweight (60 kg, 132 pounds) category of the men’s judo competition, making him a Judaico judoca, Portuguese for Jewish judoka. The bronze medal Kitadai earned in the London Games is one of dozens of medals he has compiled over the years. Most of that hardware is made of gold — Kitadai finished first in the past six Pan American Judo Championships and racked up two golds at last year’s Military World Games. The 27-year-old’s only other third place finish on the world stage came seven years ago at the 2009 Maccabiah Games in Tel Aviv. There, Kitadai won the first medal of his professional career, a bronze, while competing against only Jewish athletes.

If the Israelita (the preferred name for Brazilian Jews) seizes his golden opportunity this time around, he will be sure to keep his prize safer than he did four years ago. The day Kitadai was adorned with an Olympic medal in 2012, on his 23rd birthday no less, he was so elated he swore to never take his award off — even wearing it into the shower. The Sao Paulo native tried to avoid getting the medal wet by placing it in his mouth — a decision that proved costly. The medal slipped from his teeth, split from its strap and collapsed onto the floor, resulting in a dent. Not all was lost though; the International Olympic Committee eventually gave the Judo champion a replacement medal.

Brazil’s hopes of a positive showing in the first ever Olympics hosted in a South American country fall heavily on the shoulders, literally and figuratively, of their 14-member Judo team. Ney Wilson, a Brazilian Judo Confederation official, told reporters last week that “judo is the flagship” Brazilian sport.

Watch Kitadai starting Aug. 6 when the 60 kg category kicks off the action at the judo tournament in the Summer Games.