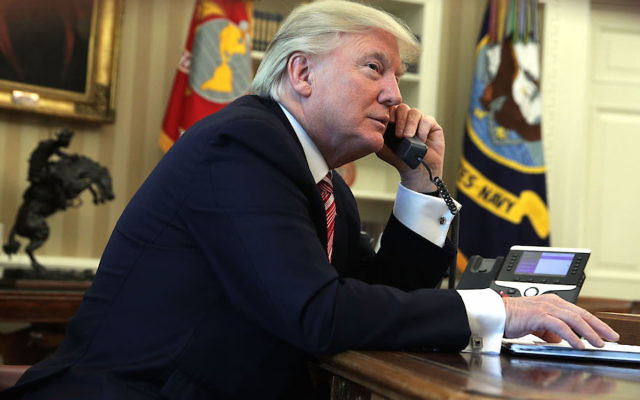 President Donald Trump speaking on the phone in the Oval Office of the White House, June 27, 2017. Getty Images

WASHINGTON (JTA) — Three streams of American Judaism will not participate in the traditional annual pre-High Holidays call with the president, saying Donald Trump has “given succor to those who advocate anti-Semitism, racism, and xenophobia.”

“We have concluded that President Trump’s statements during and after the tragic events in Charlottesville are so lacking in moral leadership and empathy for the victims of racial and religious hatred that we cannot organize such a call this year,” said a statement Wednesday by leaders of the Reconstructionist, Reform and Conservative movements, which went on to the “succor” comment.

Trump at first said there was violence on “both sides” and for two days did not single out the white supremacists for censure. A day after he did so, the president said there were “very fine people” among the far-right protesters and the counterprotesters.

“Responsibility for the violence that occurred in Charlottesville, including the death of Heather Heyer, does not lie with many sides but with one side: the Nazis, alt-right and white supremacists who brought their hate to a peaceful community,” the statement said. “Our tradition teaches us that humanity is fallible yet also capable of change. We pray that President Trump will recognize and remedy the grave error he has made in abetting the voices of hatred.”

“We respect the office of the presidency and believe it is more effective to address questions and concerns directly with the White House,” said Rabbi Mark Dratch, the executive vice president of the Orthodox movement’s Rabbinical Council of America.

Similar briefings occurred with Presidents George W. Bush and Bill Clinton, but not necessarily formalized as a pre-High Holidays call. With Bush, for instance, there often was an in-person meeting on the day of the White House Hanukkah party, a tradition launched by Bush.