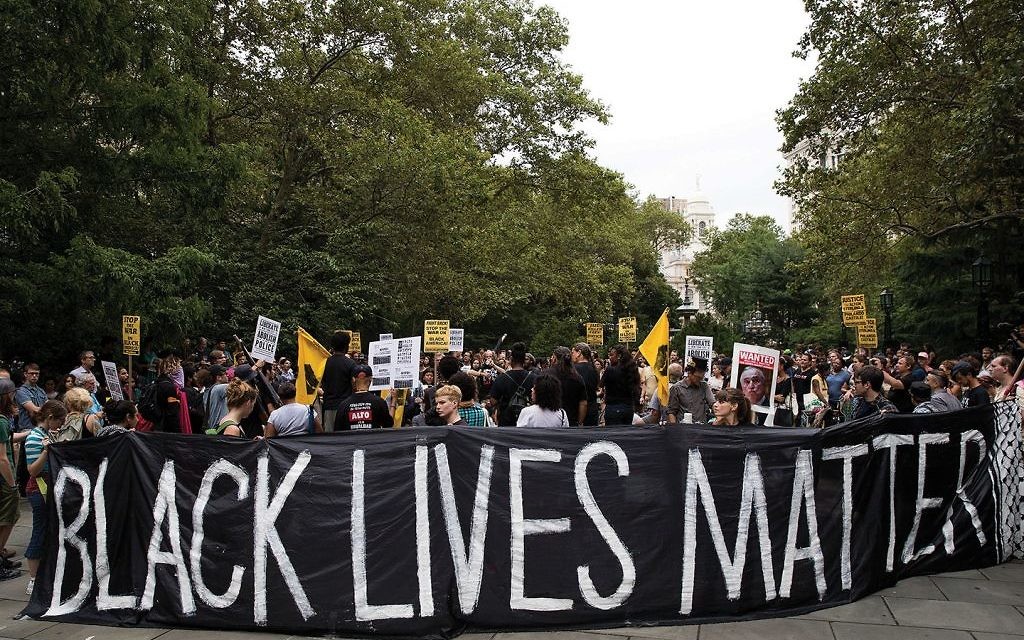 Last month, in the wake of the murders of five police officers in Dallas at a Black Lives Matter rally, Jewish groups sought to strike a delicate balance between support for law enforcement and for the goals of a movement that has shined a light on police brutality and mass incarceration.

This week, that balance got even more precarious as center-left groups are finding a way to react strongly to a Black Lives Matter policy platform that charges Israel with “genocide,” while at the same time not abandoning the movement altogether.

The platform, released last week, also refers to Israel as an “apartheid state” for its settlement activity and treatment of the Palestinians and calls for support of the BDS (Boycott, Divestment and Sanctions) movement as well as for ending U.S. aid to Israel.

In a threading-the-needle statement — standing up for Israel but not jettisoning Black Lives Matter — the Anti-Defamation League titled a blog post by its CEO, Jonathan Greenblatt, “Eyes on the Prize: In Pursuit of Racial Justice, Stick to the Facts and Avoid the Fiction,” borrowing language from the civil rights movement of the 1960s but criticizing what it considered a serious mischaracterization of the Jewish state.

“Whatever one’s position on the relationship between Israel, its Palestinian citizens, and the residents in the West Bank and Gaza, it’s repellent and completely inaccurate to label Israel’s policy as ‘genocide,’” Greenblatt wrote. “We strongly disagree with the Platform’s erroneous broad-brush conflating of the Israeli-Palestinian conflict with civil and human rights abuses discussed in the document,” he continued.

But Greenblatt stressed that, however off-target the platform may be when it comes to Israel, and however “offensive” the tone of the language, his organization would not make a clean break with the Black Lives Matter movement. There is, he wrote, too much work to do “in the hard fight to advance a shared agenda of equality, justice, and respect for human dignity through leadership work in education, legislation, and litigation. Where possible, we want to engage with a range of activists to achieve these goals.”

In that fight, he concluded, “We cannot walk away.”

In an indication of the bind some progressive Jewish groups are in, Washington-based Bend the Arc released a statement on the platform Friday without mentioning the words “genocide” or “apartheid state.”

“We know some within the Jewish community, including members of our own organization, are expressing deep pain and outrage over some of the language and policy solutions proposed in some elements within the international section of the platform released this week by the Movement for Black Lives,” it read. “We also acknowledge the pain and outrage felt by some members of the Movement for Black Lives that prompted the inclusion of this language in the first place. It is with sincere anguish that Bend the Arc holds these two realities simultaneously.”

T’ruah: The Rabbinic Call for Human Rights acknowledged a similar kind of cognitive dissonance, but in a more direct way.

“While we agree with many of the policy recommendations, we are extremely dismayed at the decision to refer to the Israeli occupation as genocide,” its statement read. “One can vigorously oppose occupation without resorting to terms such as ‘genocide,’ and without ignoring the human rights violations of terrorist groups such as Hamas.”

But it also stressed that it will “recommit ourselves unequivocally … to working together with our friends and neighbors in the African-American community, whose experience of the criminal justice system is, far too often, determined by race.”

Jewish groups on the far left, including Jewish Voice for Peace and IfNotNow, staged a counterprotest outside Boston’s JCRC on Monday, calling on the agency to retract its statement distancing itself from the Black Lives Matter platform.

Efforts to reach a representative of Black Lives Matter for comment were unsuccessful, but one of the platform’s authors told JTA that the use of the word “genocide” was apt given “a structure of violent deaths [of Palestinians] that are state sanctioned … and ongoing.”

For Jews of color, the debate unleashed by the platform is a complicated one.

“It’s important to allow for the importance of nuance,” Chava Shervington, president of the Philadelphia-based Jewish Multiracial Network, told The Jewish Week. (She stressed that she was speaking generally and not reacting specifically to the Black Lives Matter platform since her organization deals with domestic issues.) “Does the Movement for Black Lives [the umbrella group that created the platform] speak for all black people, or does X, Y, Z Jewish organizations’ response speak for all Jews in America? I think there needs to be a level of recognition that this conversation is much more gray than [the] black and white [one] we have right now. … I see Jews of color standing in a place of tension — we’re dealing with the underlying issues that Black Lives Matter is seeking to address; regardless of how you feel about the platform, those issues didn’t go away.”

In an email interview with The Jewish Week, Marcella White Campbell, managing editor of Be’chol Lashon (In Every Tongue), a San Francisco-based diversity advocacy group, said, “As a Jew of color, the question for me is not whether to disavow Black Lives Matter, contemporary black activism, and the search for representation, but how to continue to engage with those issues. I am a black American and I am also Jewish. This means that the Jewish community is already engaging with the Black Lives Matter movement, right here, right now.

“Racism isn’t one of many social causes Jews can choose to embrace or ignore,” Campbell continued. “Essays and programming that debate whether and how the Jewish community should support the Black community are irrelevant. Twenty percent of American Jews are considered Jews of color; race is and has always been a Jewish issue.”

In an open letter to the Black Lives Matter movement posted on The Jewish Week’s website (thejewishweek.com), a leading Conservative rabbi, Gil Steinlauf, urged the movement to disassociate itself from BDS supporters. In the piece, headlined “You Are Promoting A Message Of Hate,” he attempts to use the charged issue of “privilege” against the leaders of the Black Lives Matter movement, writing, “When Black Lives Matter supports BDS and labels the Jewish people as perpetrators of genocide, then Black Lives Matter is falling into the very oppression that it seeks to dismantle. BDS and similar groups are the product of privileged people who care about Palestinians, but who cannot understand the full complexity of dynamics in Israel-Palestine.”

And Rabbi Steinlauf, spiritual leader of Adas Israel Congregation, in Washington, D.C., concludes, “I implore you to reconsider your affiliation with hateful groups of privileged people with their hateful labels of the Jewish state. I implore you to treat the Jewish people the way you ask this nation to treat black people: to be still and to listen to us; not to presume you understand us because you care, but to acknowledge that you cannot understand what it means to be Jewish or Israeli. In acknowledging this uncomfortable truth, we can truly hear each other, and act to support each other in effecting justice.”

For Brandeis historian Jonathan Sarna, the notion of “intersectionality” — the idea that the Black Lives Matter cause has become linked to the Palestinian cause — is a distressing one.

“I think when the history is written, this will be an opportunity lost, and it’s very sad,” he told The Jewish Week via email from Israel. “I think there was a possibility of making a great coalition of people who felt that they have been awakened to a great wrong and a great evil, which was that too many policemen treated black people differently to white people. Instead of building on that possible gain, they embraced all sorts of causes, which will not gain the same traction.

“I think that the cause of Black Lives Matter was greatly harmed,” Sarna added, “and future historians will say they put ideology ahead of the real needs of the African-American community.”