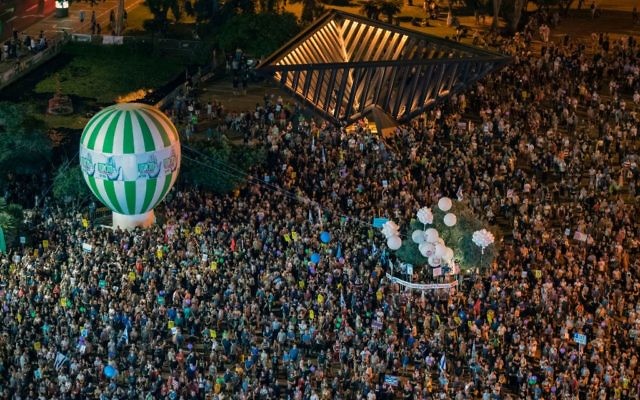 A general view shows thousands gathering at a mass demonstration against 50 years of occupation titled "Two States - One Hope", on May 27, 2017 at the Rabin Square in the Israeli coastal city of Tel Aviv. Getty Images

JERUSALEM (JTA) — Thousands of Israelis gathered on Rabin Square in T el Aviv to demonstrate against what organizers called “50 years of Israeli occupation of the Palestinian Territories.”

The rally on Saturday night under the banner of “Two States –One Hope” was organized by Peace Now and included left-wing Israeli political parties such as the Zionist Union and Meretz parties, as well as several other left-wing organizations including the Geneva Initiative, the New Israel Fund, “Standing Together,” “Zazim,” and “Reinforcing the Left on the Web,” 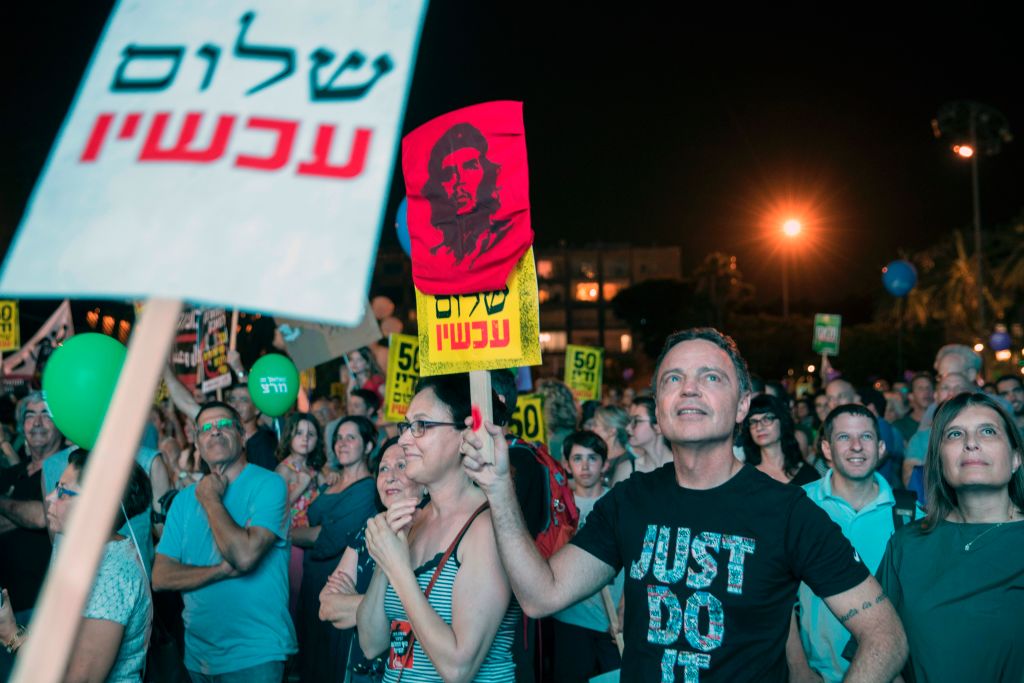 Israeli left-wing supporters gather at Rabin Square in the Israeli coastal city of Tel Aviv for a mass demonstration against 50 years of occupation titled “Two States – One Hope”, on May 27, 2017. Getty Images

A letter from Palestinian Authority President Mahmoud Abbas to the organizers was read on stage: “there is no stronger voice than the voice of just and comprehensive peace, just like there is no stronger voice than that of people seeking self determination and freedom from occupation. It is time to live, you and us, in peace, harmony, security and stability. The only way to end the conflict and fight terrorism around the world is through a two-state solution based on the 1967 borders, Palestine alongside Israel.”

Opposition leader Isaac Herzog, head of the Zionist Union, called for the establishment of a strong political bloc to defeat the right wing, which has been in power for years: “we must put our egos aside and join together to one political bloc. A political bloc which includes parties, public figures and movements that work for change. A political bloc that is not interested in a binational state, in half a democracy. A bloc that wants a Zionist, Jewish, democratic with equality to minorities and openness to a variety of views. This bloc needs to include many from Livni to Kahlon to Lapid and others. Only together we will win.”

Peace Now Director General Avi Buskila also attacked the current government: years we have been letting the irresponsible right wing government take us down an abyss, hinder our democracy, our morality. Today we are putting an end to this. We are fighting for our future in a Jewish and democratic state.”

The rally came days after the country celebrated 50 years since the reunification of Jerusalem during the Six Day War.