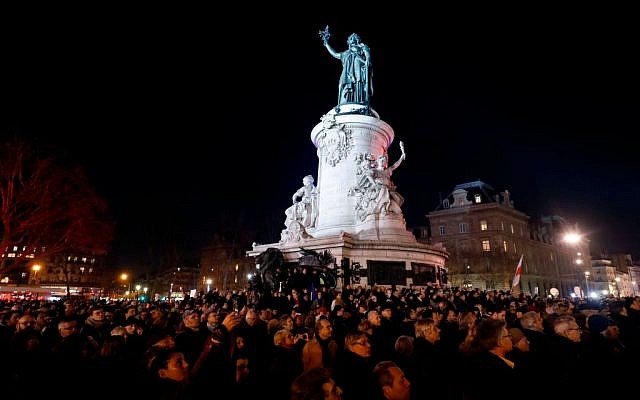 People take part in a rally against antisemitism, at Republique square in Paris, on February 19, 2019. - A flare-up of anti-Semitic acts culminated in a violent tirade against a prominent writer during "yellow vest" anti-government protests last weekend. 96 Jewish graves were also vandalised in the village of Quatzenheim, close to the border with Germany in the Alsace region on February 19, 2019, on the day of nationwide actions against a rise in anti-Semitic attacks. (Photo by FRANCOIS GUILLOT / AFP) (Photo credit should read FRANCOIS GUILLOT/AFP/Getty Images)

(JTA) — Thousands participated Tuesday in demonstrations against anti-Semitism across France.

Protesters took to the streets in some 70 marches only hours after nearly 100 gravestones at a Jewish cemetery in the eastern French village of Quatzenheim were discovered vandalized with swastikas. Some protesters held posters saying “That’s Enough.”

“Whoever did this is not worthy of the French republic and will be punished,” President Emmanuel Macron said at a visit to the vandalized cemetery on Tuesday.

Former French presidents Francois Hollande and Nicolas Sarkozy joined the march, along with over half of current Prime Minister Edouard Philippe’s cabinet and leaders of most of the country’s major political parties. Notably absent was the far-right National Front party head Marine Le Pen, who held a separate event. 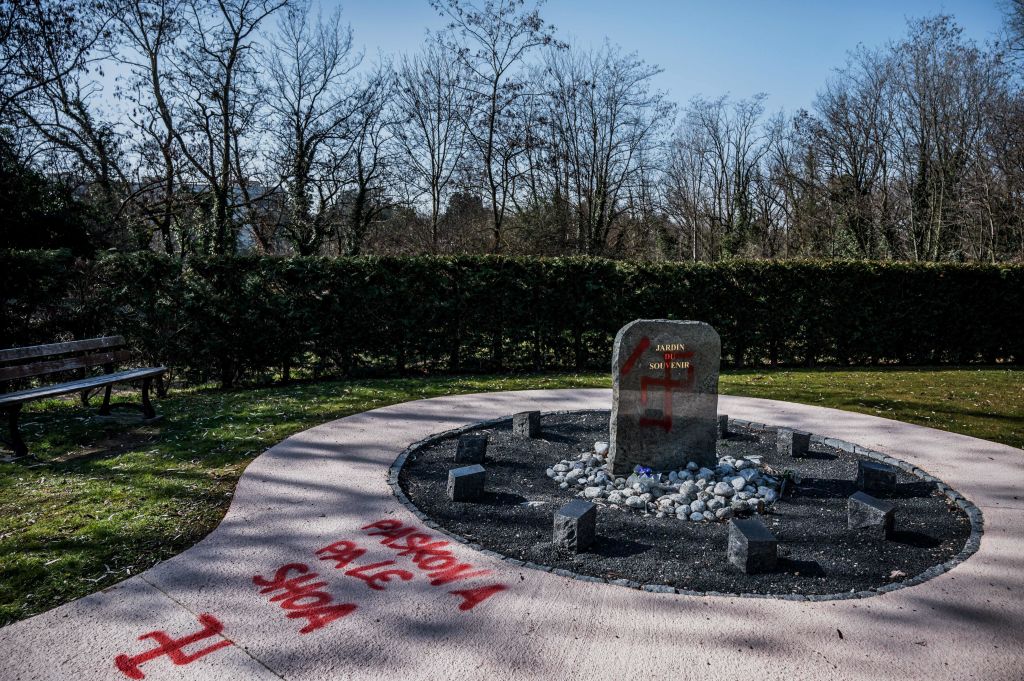 A photo shows swastikas at the stele of the “Jardin du Souvenir” (Garden of Memories) and the words “Paskon a pa le shoa” a play on words with the holocaust (shoah) sounding in French as “because we don’t have the choice” after antisemitic graffiti was discovered in the Champagne-au-Mont-d’Or cemetery on February 20, 2019. Getty Images

Macron went on to observe a moment of silence at a Holocaust museum in Paris with French parliamentary leaders.

The marches follow a wave of anti-Semitic incidents in Paris, spurring 14 political parties to urge a protest rally in response. Interior Minister Christophe Castaner said last week that anti-Jewish acts rose by 74 percent in 2018 over the previous year.

Last Monday, a tree planted in memory of Ilan Halimi, a young Jewish man tortured to death in 2006, was cut down, and earlier this month anti-Semitic epithets were painted around the city, including on a local bagel shop. Swastika graffiti was recently found on a portrait of late French Jewish politican Simone Veil.

France is home to some 550,000 Jews, the largest Jewish community in Europe.