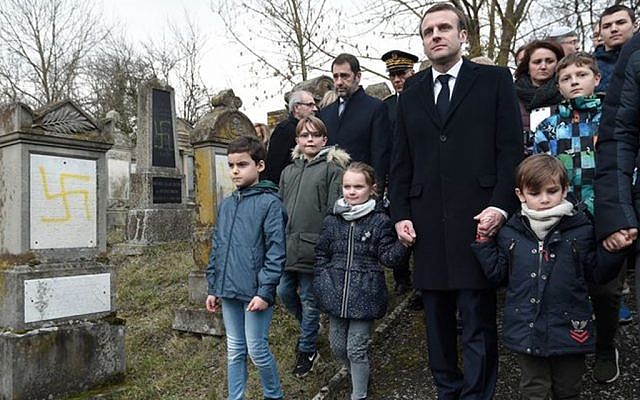 French President Emmanuel Macron (C) holds children by the hands as he walks past graves vandalised with swastikas during a visit at the Jewish cemetery in Quatzenheim. FREDERICK FLORIN/AFP/Getty Images.

The word anti-Semitism is often associated with memories of the past. Pogroms, the Spanish Inquisition, the Holocaust. It’s not eradicated, of course, but at least it’s relegated to dark, cobwebbed corners. Or, at least we thought it was – but not anymore. An Atlantic article recently published, titled “This Week in Anti-Semitism” tells the story of this resurgence of hatred that isn’t being discussed nearly as much as it should be.

For several years, the news media has been accusing Jeremy Corbyn of anti-Semitism. These accusations reached a tipping point last week after a group of Labour MP’s left the party, partially due to unaddressed anti-Semitism. Luciana Berger, a Labour MP for Liverpool Wavertree and one of those who left the party, endured a barrage of hateful comments, including images superimposing her on rats and swastikas. One of her constituents commented that she didn’t deserve that treatment, “even though she is Jewish” and Chris Williamson, a Labour MP, claimed that the party was becoming “too apologetic” about anti-Semitism. At first, the Labour Party decided not to suspend him, but they reversed the decision after a public outcry.

This is happening around the world. The Chief Rabbi of Argentina was attacked, a Brooklyn synagogue was vandalized, graves in a Jewish cemetery in France were defaced. In the United States Congress, Ilhan Omar has raised eyebrows for invoking common tropes about Jews and money in tweets accusing allies of Israel of being motivated solely by money. This week hasn’t just been a fluke: anti-Semitism is rising, thanks to a worldwide political trend normalizing prejudicial views. In America, there are now over 1,000 hate groups active, up seven percent from last year and 30 percent in the past four years.

Anti-Semitism is not relegated to the left or right

This is a problem both in the sense that anti-Semitic events are occurring with an alarming frequency around the world, but also because these events aren’t being talked about nearly enough. Most people have little grasp of domestic politics, let alone international politics. Because of the constant barrage of headlines, this doesn’t seem like a pressing issue, but that’s a problem because it is. Anti-Semitism is not relegated to the left or right; Britain has demonstrated that, and so has America. Anti-Semitism is a human issue. Whether it takes the form of swastikas, of holding Jews collectively responsible for the actions of the Israeli government or of invoking harmful stereotypes that dehumanize Jewish people, anti-Semitism is dangerous and must be taken seriously. If we don’t take anti-Semitism seriously, people who hold similar hateful views will believe that these comments are normal, and it is possible to voice their views with impunity. At that point, we will wish for the week we just had because at least people weren’t getting killed, and at least we could practice our religion openly.

I hope that this isn’t the beginning of something much worse. I hope that this is the point where everyone takes a step back, realizes what the world is becoming and changes their ways to prevent us from continuing down a dangerous path. But I don’t believe that will happen. Or, I don’t believe that this better future will come about on its own. People need to speak out, Jews and non-Jews alike. Everyone needs to care. Anti-Semitism needs to be taken seriously, in whatever form it may take. People who are ignorant must be educated. When ignorant people make anti-Semitic comments, they need to apologize and prove with their actions that they will be better. It’s not a solution, but at least it’s a start, and we need a start. Otherwise, “This Week in Anti-Semitism” will be a recurring column – until the world is too tired to care anymore.