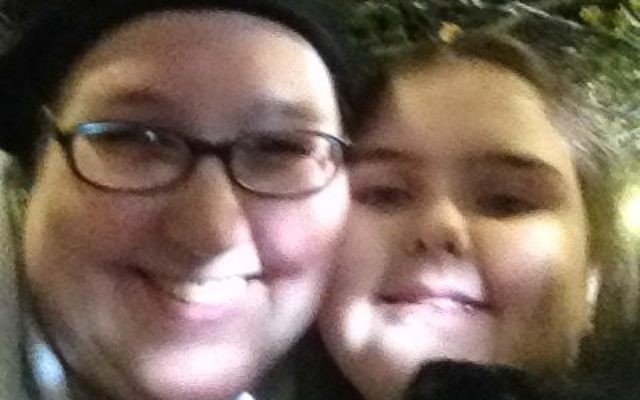 Sara Atkins and her daughter Freida. Courtesy of Sara Atkins

Sara Atkins, a Chasidic stay at home mother of five children is busy this summer planning her son’s Bar Mitzvah, overseeing her children’s schooling (they all attend a cyber charter school) and taking her children to their scouts and other activities. But taking even more of her attention has been her taking action against the proposed Republican healthcare bill. New Normal editor Gabrielle Kaplan-Mayer interviewed Sara about what is motivating her actions to stop the bill.

GKM: Tell me about your family and your medical care needs.

SA: I’m the mother of five children, ranging in age from five to fourteen. All five of my children have Tourette Syndrome. My daughter Frieda is 11 and has a yet unnamed orphan autoimmune disorder. She is on many many medications, including a very expensive medication that we travel from our home outside of Philadelphia to Johns Hopkins in Baltimore for her to receive every other week. Freida also ADHD, OCD and other learning disabilities including dyslexia.

Because of her autoimmune disorder, she has idiopathic anaphylaxis—she can go into anaphylaxis for no apparent reason. Before the current medication that she is receiving now, Frieda needed 8-10 Epipens/week, was on a very high level of steroids and had frequent hospital visits. With the new drug she has improved a lot—we are down to mostly 1 Epipen/week. Frieda has been stable for a year—which is huge for her. She is thriving academically now and started Chanukah card project through her Girl Scouts in which they sends cards to the troops. She has extreme, chronic stomach pain and can choke on liquids and solids but we are finally out of crisis mode.

GKM: How will the current healthcare proposal affect your family?

SA: For all of my children who have Tourette Syndrome, cuts to Medicaid would impact the therapies that they receive and their ability to function in the world. This bill would make their life quality worth less than it is now.

Obamacare stops insurance companies from limiting yearly or lifetime coverage expenses—if that law is reversed, it would be a be death sentence for Freida. Because of her Epipens, medicines, doctor and hospital bills, we would reach our yearly limit quickly. There are treatments to keep her stable, but we wouldn’t be able to pay for them.

Frieda knows this reality and she took action during the Presidential campaign. She called people we know and asked them to vote for Hillary Clinton. She told them, “She cares about my life and keeping me alive.”

GKM: What actions have you taken to speak out/protest against the Republican healthcare bill?

SA: I’m involved with Tuesdays with Toomey and Philly UP. Last week, a group of us organized by Housing Works Inc. went to Washington DC to tell our stories to Senator Toomey. I had a big poster of Freida and wrote a 90 second version of her medical story. We went into Toomey’s office and asked to speak to the senator. A minute later cops came in. Two staffers came in and said the Senator will not see you but we can listen but we have to go to a conference room. We held our ground. We started telling our stories while “waiting for the senator.” I went first and even the male staffer looked like he wanted to cry. We demanded to see the senator. We moved into the hall so that we would not be arrested in the office. We told two more stories and sat down. We started to chant.  We got our second warning and I started YELLING Freida’s story and they repeated my words yelling! We got our third warning before I was done. I screamed at the top of my lungs the last line: “Senator Toomey, will you be signing my daughter’s death certificate?!”

At that point I was grabbed up. They demanded to check my hair and I made clear, I am an Orthodox Jew and can not have my hair uncovered in front of men. She tried to tell me oh well and I repeated, this is my religion, etc…She went to her superior who gave her instructions. She came back and told me, she would be taking me into the senator’s office to check me privately. However, if I chant, etc… they will be charging me with a higher offense which would include prison time. Also, if I do this, they will take me back into the hallway to check my hair in front of everyone. They cuffed me after checking me. She handed me off to a different cop to take me to the van. He tightened my cuffs (cause you know, the scary Chassidic stay at home mom!) to the point where I lost feeling in my hands and a vein popped. I felt every fibro trigger spot scream in pain but I prepared myself for that. I told the officer on the van that I couldn’t feel my hands. While he loosened others, he told me no. We were arrested around 2:30pm and not released until after midnight. I was repeatedly denied my fibromyalgia and migraine medication.

GKM: What do you wish the Jewish community understood about the healthcare debate/Medicaid?

SA: The reality is there are a lot of Orthodox Jews on Medicaid—a lot of kids and seniors—and they are going to lose their healthcare if this bill goes through. People forget before the ACA how expensive insurance was–this bill takes us back further. Even if you have good employee insurance, this kind of bill affects every single American. Almost all of us have preexisting conditions.

I wore my snood and not my wig when I went to Washington so that when people saw the footage they could see that I’m Orthodox. People are scared to speak out but we need people to speak it out. This is about the life expectancy of every American—including Orthodox Jews and all of us.

Sara Atkins in the mother of five and serves as President of the Board of Directors at Angel Service Dogs Puppy Raisers & Guardians.

Gabrielle Kaplan-Mayer directs Jewish Learning Venture’s Whole Community Inclusion which fosters inclusion of people with disabilities through the Philadelphia Jewish community. She loves writing/editing for “The New Normal” and for WHYY’s newsworks. Her latest book The Little Gate Crasher is a memoir of her Great-Uncle Mace Bugen, a self-made millionaire and celebrity selfie-artist who was 43 inches tall and was chosen for this year’s Jewish Disability Awareness & Inclusion Month Book Selections. She’s recently shared an ELI Talk on Standing With Families Raising Kids With Disabilities and has released a journal designed for special needs parents.