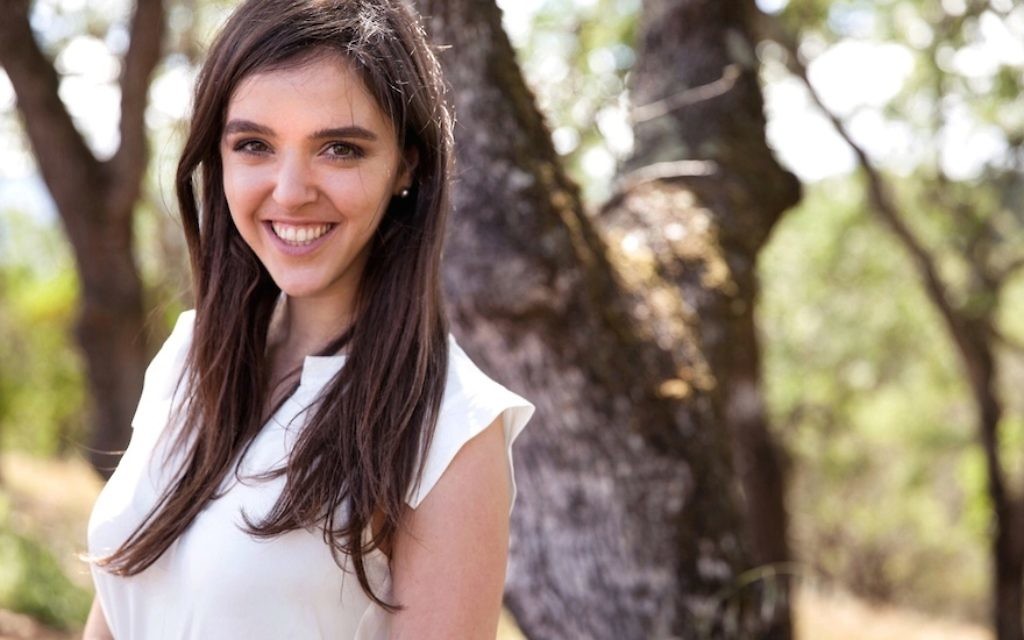 Erin Schrode may not be a household name — yet. But if the 25-year-old Jewish activist lures enough of her millennial peers to the polls for California’s Democratic primary on June 7, she just may become the youngest person in the U.S. House of Representatives — and the youngest woman ever elected to Congress.

The proud millennial — Schrode eschews the characterization of her peers as lazy and entitled — has long been on the fast track to success.

At 13, she founded Turning Green, a national nonprofit that promotes environmental education and advocacy. In 2010, following the catastrophic earthquake in Haiti, Schrode launched The Schoolbag, which provides school supplies to needy students around the world.

Such inspired entrepreneurship has earned her kudos from the Jewish community, including a spot on the Forward’s list of most inspiring Jewish teens and a $36,000 prize from the Helen Diller Family Foundation’s Teen Tikkun Olam program.

Now the Northern California native is facing a major challenge in the primary race against incumbent Jared Huffman in the 2nd District, which stretches from the Oregon border to the Golden Gate Bridge: Huffman has raised some $620,000 to Schrode’s $2,250. Yet the upstart’s candidacy has made headlines across the country.

Schrode took a brief respite from nonstop campaigning to speak with JTA about her Jewish identity, her views on Israel and what she hopes to accomplish in office.

JTA: Were you always interested in running for a government office?

It feels like most millennials are turned off by government these days.

Totally. Never in a million years — I still don’t think of myself as a politician. Public service has been my life and it will continue to be my life. … However, when I see the most talented, capable people I know, they won’t touch politics. So what do we end up with? The same broken policy, the same divided government, the same struggling country. So I’m going there — I’m diving in [to politics] because I feel it’s the place I can be most effective right now.

What are some policy proposals you would try to implement if elected?

We have four main pillars, which are environment and public health; learning and the future of work; human rights, and technological innovation.

I’m really passionate about soil, about dirt. It has this incredible capacity to sequester carbon, to actually remove greenhouse gases from the atmosphere and put them back where they belong to prevent further ocean acidification and also to enrich our soils. So incentivizing farmers to plant cover crops and use agroforestry is absolutely critical.

On public health, we haven’t had comprehensive talks on reform in this country for 40 years. So how do we ensure that our most vulnerable populations — pregnant women, children, babies — don’t feel the brunt of our environmental waste?

In the learning and future of work category, student debt is already a crippling burden. How do we lower astronomical [interest] rates, implement loan forgiveness programs and actually allow people to refinance that debt?

From a human rights perspective — let’s talk gender equality, let’s talk paid leave [for] men and women [to care] for newborns and for elderly folk. Criminal justice reform is also huge for me. Nonviolent drug offenders are taking up the majority of our prisons, the populations of which are exploding.

Given your age, how are people reacting to you on the campaign trail?

It’s been an incredible journey thus far. When we started this campaign, I did not expect it to resonate in the way it has. People are clearly hungry for something different in politics and have [come] out in such strong support of my candidacy. We get a lot of young people saying, ‘We’ve never been interested in politics.’ This is the first time they’ve see someone who looks like them, talks like them, remotely understands what it’s like to be them, running for office.

But I’ll tell you, the political establishment has not been so welcoming of our candidacy. I am challenging an establishment Democrat and that is ruffling feathers. There are no endorsements coming from elected [officials] or from the party or from organizations that typically would endorse. So for us it’s really about grassroots power.

I think one of the earliest memories in my mind, visually, is of the tzedakah box in the center of the table at my grandparents’ house [in Philadelphia]. That idea was instilled in me at a very young age.

In California where I grew up, I went to Temple Emanuel in San Francisco. I was bat mitzvahed there in what I think is the most beautiful synagogue on earth. I’m partial. Now I really see tikkun olam as being the guiding force in my life. Repairing the world is the mission, right? If more people were to embrace that, follow that, live those values, we would have a significantly better earth.

But while I am Jewish, I never had any connection to the State of Israel. I went for the first time on Birthright when I was 19 years old and had a visceral, physical response upon landing in Ben Gurion — this profound sense of homecoming, of belonging, of being with my tribe, my people. And I went back, I studied in Tel Aviv for six months. And I’ve been back a number of times since.

Your website also says you “wrote a curriculum for an eco-education center for Palestinian, Israeli and Jordanian youth.”

When I was studying in Tel Aviv, I worked with an organization called Friends of the Earth Middle East. They were about to open the first education center in the Palestinian Authority to bring together Palestinian, Israeli and Jordanian youth around environmental issues as a means of peace building, of using shared natural resources.

As an environmental education enthusiast I wrote — in Hebrew and broken Arabic, thankfully I had friends who were fluent in both — a curriculum centered around gardening, biodiversity, gray water and water conservation. These are unifiers that everyone in the Middle East is dealing with and, for a lot of these kids, it was their first exposure to meeting someone who is not like them, who does not have the same background.

You quoted Israeli Prime Minister Benjamin Netanyahu’s controversial speech to Congress about the Iran nuclear deal in a tweet last year: “The days of when Jewish people stayed passive in the face of genocidal enemies is over. #neveragain” So you’re very pro-Israel?

I’ll start with the “never again” idea. About eight months ago, I saw a picture of a 3-year-old refugee boy washed up dead in Turkey. And that hit me hard. Because we say “never again,” and in my mind “again” is happening on the other side of the Mediterranean. So I went on a plane, I went to Lesbos [in Greece]. I was working with Syrian, Iraqi and Afghan refugees there on the shores.

I fundamentally believe in the right to statehood for our Jewish people. And that has to be the baseline for any peace process. I believe in peace, I believe in a two-state solution. … I’ve spent a lot of time traveling through the Middle East. Amazing, amazing human beings; hospitality the likes I’ve never seen. But engaging in these conversations, you have to begin with the baseline understanding that we as a Jewish people have a right to exist. And when that is in jeopardy, that is a scary thought.

Barbara Boxer and Dianne Feinstein are here [in California]; they’re the senators who represent my state. I’ve grown up with them. In my mind that is one of my earliest exposures to politics — two female Jewish women. So that’s a powerful statement. Lets put more of us in office, right? I think the world would be a better place.