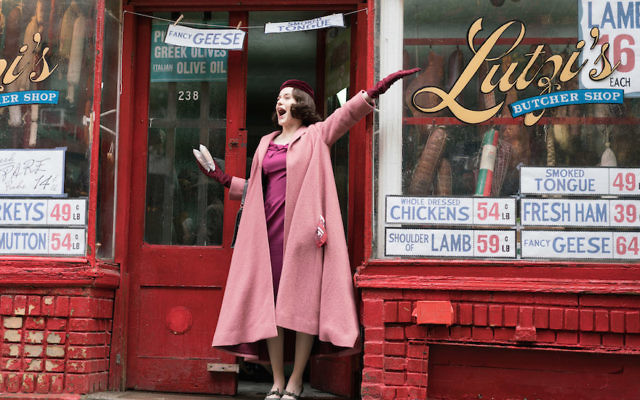 Rachel Brosnahan stars as Miriam “Midge” Maisel, the titular character in “The Marvelous Mrs. Maisel.” (Courtesy of Amazon Studios via Times Of Israel)

JTA — Plenty of Jewish actors as well as films and shows with Jewish content made this year’s Golden Globes shortlist.

Here are the Jewish nominees for the award, presented by the Hollywood Foreign Press Association. Winners will be announced on Jan. 6 during the awards show on NBC.

Adam Driver was nominated for best supporting actor in a film for his role in “BlackKkKlansman.” Driver, who is not Jewish, plays a Jewish cop who teams up with an African-American officer to infiltrate a Ku Klux Klan branch in the Spike Lee film, which was also nominated for best motion picture.

Rachel Weisz is up for best supporting actress in a film for portraying a friend of England’s Queen Anne in the 18th-century costume dramedy “The Favorite.”

Timothee Chalamet is up for best supporting actor in a film for his role as a teen struggling with a meth addiction in “Beautiful Boy.”

South African pop star Troye Sivan‘s song “Revelation” in the film “Boy Erased” is among the nominees for best original song, as is Mark Ronson‘s “Shallow” from “A Star Is Born.”

“The Kominsky Method” and “The Marvelous Mrs. Maisel” were both nominated for best musical or comedy television series. Rachel Brosnahan, who is not Jewish but plays the Jewish protagonist in Amazon’s “Maisel,” is also up for a nomination for best actress. Alex Borstein was nominated for best supporting actress for her role as Brosnahan’s sidekick in the Amazon series.

Brosnahan is joined in that category by Alison Brie (“Glow”) and Debra Messing (“Will & Grace”).

Sacha Baron Cohen‘s performance in his satirical ambush show “Who Is America” earned him a nomination for best musical or comedy television actor.

Henry Winkler was nominated for best supporting actor for his role as an acting coach in the HBO comedy series “Barry.”