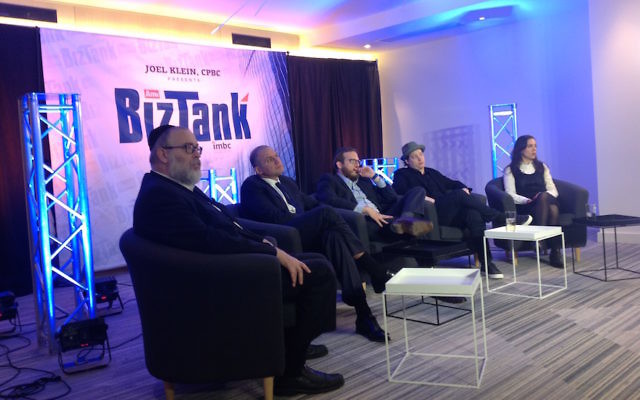 NEW YORK (JTA) — At the opening of the most recent season finale of “Shark Tank,” the ABC reality show about startup entrepreneurs, a male model stripped and posed in front of a group of investors, showcasing a business that combines drinking wine and painting pictures.

At the beginning of a takeoff of “Shark Tank” in Brooklyn, an Israeli in a beige kippah, gray blazer, pink shirt and blue jeans stood before a panel of five investors — two with black kippahs and beards, one in an ankle-length dress with long sleeves. Before the show, a woman in a wig had discussed camera work in Yiddish with one of her employees. Now the cameras were rolling and the Israeli entrepreneur pitched his product, which allows real estate brokers to virtually tour interactive, 3-D renderings of their properties.

Welcome to BizTank, the haredi Orthodox version of “Shark Tank.”

At their core, “Shark Tank” and BizTank are the same: Entrepreneurs pitch their businesses to investors, who fire off a round of questions and then decide whether or not to invest. But there are two big differences: Almost everyone on BizTank is Orthodox Jewish, and the program is a lot more heimish.

On “Shark Tank,” the cast of investors includes Dallas Mavericks owner Mark Cuban and businesspeople such as Barbara Corcoran and Kevin O’Leary, with guest appearances by celebrities like Ashton Kutcher. Some of the investors on BizTank aren’t easily Googleable; among the most well-known names is Ronn Torossian, a prominent Jewish public relations professional known in part for his work with the Israeli right. In the tech sphere, Torossian was an early investor in JetSmarter, which TechCrunch called “the Uber for private jets.”

And while BizTank has been meeting and filming since April 2016, it’s unclear when and in what format the show will air. Currently its biggest media exposure is in a column in Ami Magazine, a haredi publication that helps produce the program.

But Joel Klein, the creator of BizTank, doesn’t sound concerned about signing a TV contract. He says the point of the show isn’t to garner viewers; it’s to connect (mostly) Orthodox Jewish entrepreneurs with (mostly) Jewish investors. If everyone makes a little money, that doesn’t hurt either.

“In general, the frum community is business-minded,” said Klein, using a Yiddish word connoting traditionally observant Jews. “They have great ideas, but there are certain cultural boundaries that make it hard for them to get out to the outside market. And in general, for investors to get into the community is something hard. We give access to the frum business owners to get connected with the right investors.”

BizTank is shot in the basement of the William Vale, a chic, high-rise hotel in the ultra-hip neighborhood of Williamsburg — also the home to a sizable Hasidic community. But for now, the videos are shown only to a wider group of about two dozen investors to see if they are interested in the entrepreneurs’ pitches. Klein has invested in production values in case he makes a TV or web series out of the show, but he has no concrete plans to do so.

So far, BizTank has fielded some 30 startup pitches, ranging from Avoke, an avocado smoothie company, to a device, pitched by a Holocaust survivor, that helps people with arthritis button their shirts. The entrepreneurs end their presentation with an “ask” — generally an investment amount in exchange for a percentage of the company. The investors take turns asking questions about everything from the business model to the product and the company’s valuation. After the Q and A, each investor offers a few pieces of advice and say whether or not they’re in. 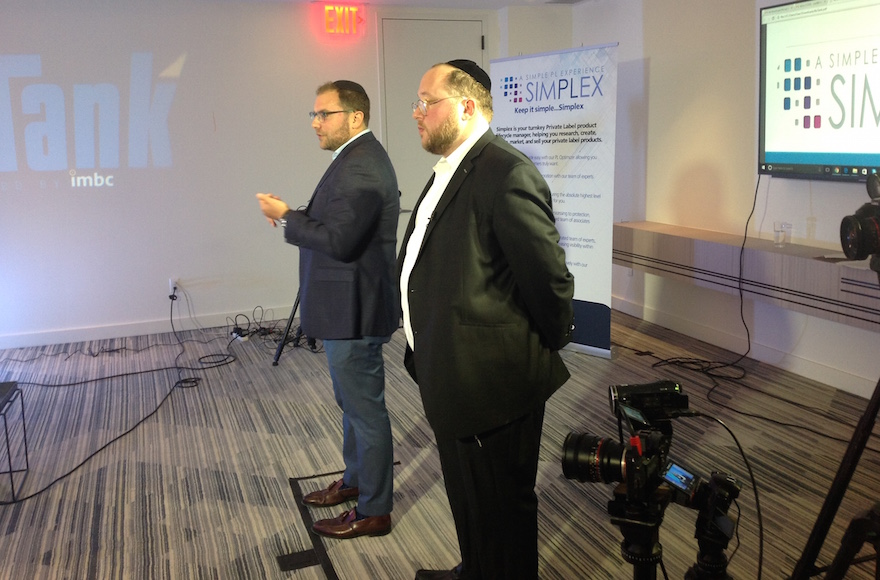 Eli Pasternak, front, and his partner pitching a business that helps private retailers sell products on Amazon at The William Vale hotel in Brooklyn, May 22, 2017. (Ben Sales)

About half of the pitches have drawn some investment from the program’s investors, Klein says, noting that one of the most successful companies to pitch has been WaiveCar, a California car-sharing company. Taken together, investments from BizTank in the companies total about $4 million. Klein says the show has hundreds of entrepreneurs on a waiting list.

Besides the identities and religious garb of the people on set, little is explicitly Jewish about BizTank content. Klein, a certified business consultant, has long side curls and speaks with a Yiddish accent. But not all the investors are haredi. On Monday’s show, Torossian didn’t wear a kippah, and the panel of five investors included Inbar Haham, a secular Israeli startup investor.

“It was my first exposure to the haredi community in New York,” said Haham, who invested in the Israeli traffic navigation app Waze and recently co-founded her own investment fund. “They’re warm people. It was a pleasure to talk to them. Speaking professionally, I was impressed by the level of knowledge.”

Not all the entrepreneurs are Jewish, either.

At the May 22 taping, the first and third presenters of the day’s total of six were men wearing kippahs. They pitched, respectively, the real estate product and a software solution that helps private retailers on Amazon produce and market their products.

Between them was Danielle Settembre, a 22-year-old hairdresser who was pitching a disposable hairbrush with a detachable, reusable handle. Settembre, who is not Jewish, applied to be on BizTank after her sister wrote about it in the New York Daily News.

Her product, she said, was a cheap and sanitary alternative to the brushes that hairdressers reuse day after day.

Settembre piqued the investors’ curiosity, though one — Antony Pinkesz, a real estate investor — sounded skeptical. He wondered why she couldn’t just produce a cheaper version of her American-manufactured product in China — and without the reusable handle. Just make a cheap brush, he said, and throw it away after one use.

“Just buy the brush,” he told her. “You’re getting it in China for 50 cents.” Salons, he said, “would buy a hundred pieces” at a time.

Settembre weathered Pinkesz’s line of questioning with aplomb, and before she left the set, three investors expressed interest in meeting with her.

Settembre told JTA that she had previously pitched RenewBrush to “Shark Tank” but never heard back. But when she called BizTank, Klein’s wife and partner, Leah, not only accepted Settembre’s pitch but worked with her to polish it before she appeared on the program.

“When I went to BizTank, they followed up right away,” Settembre said. “Joel’s wife, Leah, was very caring. It was cool to see a community come together and not only help their community, but help others that are not in the community. To me, it’s very old-fashioned. I love old-fashioned morals.”