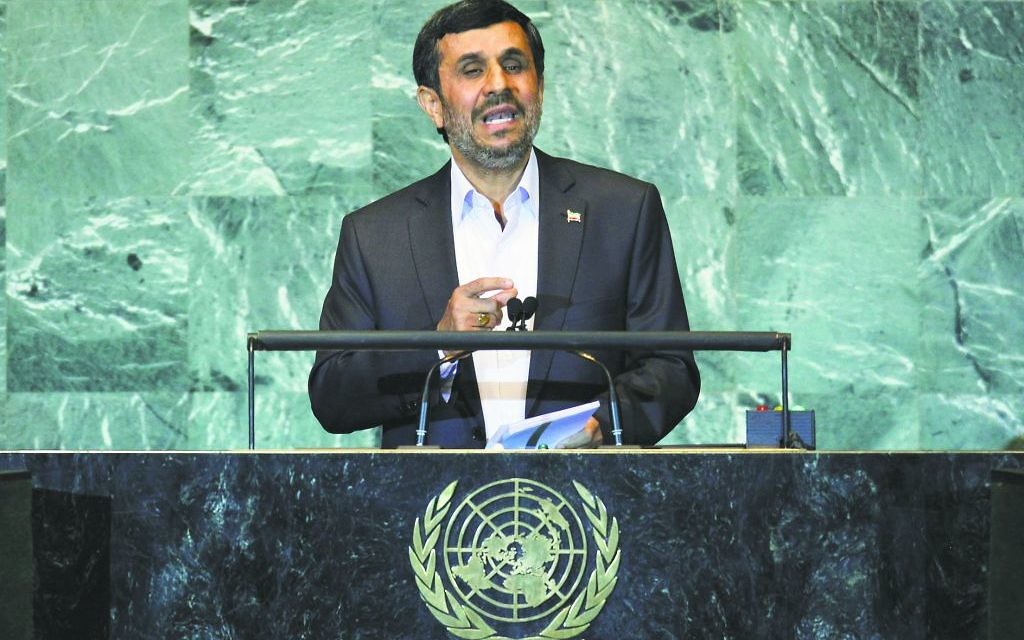 Unbeknownst to the political and communal leaders who stood outside the United Nations Monday to criticize Iranian President Mahmoud Ahmadinejad’s planned Wednesday speech to the UN General Assembly, the Iranian leader was already inside speaking.

Ahmadinejad had been introduced to speak at a forum on international law when Israel’s United Nations ambassador, Ron Prosor, rose and stormed out of the room as Ahmadinejad approached the rostrum.

“There is no justice and no judge here,” Prosor was quoted as saying loudly to aides as he left the room. “The leader of a outlaw state that flouts international law on a regular basis and violates the fundamental principles of the rule of law has no place here.”

As he walked from the UN building, Prosor told The Jewish Week: “This serial Holocaust denier has the audacity to stand up and talk about the rule of law. It’s like having an arsonist command the fire department in New York. It’s an outrage, and the Israeli delegation left.”

He said he saw the Canadian delegation walk out with him and that there might have been others.

Meanwhile at the press conference, which was held behind a police barricade for security purposes, Sen. Kirsten Gillibrand ripped into Ahmadinejad as a leader whose “heinous rhetoric is not only deplorable but must be recognized for what it is — incitement to genocide.”

“It is shocking, outrageous and offensive that this year’s farce will be given on Yom Kippur — the holiest day of the year for the very Jewish people his regime is so committed to wiping off the map,” Gillibrand fumed.

Brooklyn District Attorney Charles Hynes was equally upset with the timing of Ahmadinejad’s speech, calling it “inconceivable,” and asked that steps be made to move it to a different day.

“The repeated reprehensible statements made by a regime that is working to build a nuclear bomb, and is actively supporting terrorists who kill Americans and Israelis, must be taken seriously for what it is — incitement to commit genocide. It is time to bring the full force of international law to bear on the Iranian leaders’ criminal statements and actions.”

Gillibrand pointed out that she co-sponsored a bi-partisan resolution last week calling upon the UN Security Council and its members to increase sanctions against Iran for violating international law for inciting genocide against Israel. The resolution, which had the support of 23 senators, also calls for referring a genocide case against Iran to the prosecutor of the International Criminal Court.

“It’s time to enforce the Genocide Convention,” she said.

Among the others at the press event were several members of Congress and city officials who have attended similar press conferences in recent years. The Jewish Community Relations Council of New York organized them. In recent years, Iran 180, a group founded to demand that Iran give up its quest for nuclear weapons, has been a co-sponsor.

Chris DeVito, director of Iran180, said the message they wanted to convey to Ahmadinejad was that he is “Unwelcome in New York City.” He said they are asking that people use Twitter to express their displeasure with his presence by using the hashtag #unwelcome.

“If people are enraged, they can deliver that message through Twitter and it will come through,” he said.

Alan Jaffe, president of the JCRC, said it is necessary to hold such press conferences to denounce Ahmadinejad “because you can never stop telling the truth when you are dealing with evil — and the Iranian regime is an evil regime.”

“It’s the right and moral thing to do,” he added. “We have to keep standing up.”

Mark Medin, a senior vice president of UJA-Federation of New York, agreed, saying: “We have a moral responsibility to stand up and make our voices heard. Silence is not acceptable. We must let the world know that we will never be silent in the face of true hatred and animosity against the Jewish people and the State of Israel.”

Rep. Eliot Engel (D-Bronx, Westchester and Rockland) pointed out that not only has Ahmadinejad vowed to destroy Israel but “he would exterminate the Jewish people.”

“Despots have turned the UN into a hotbed of hatred,” he said. “It’s shameful that that kind of language comes out of the UN far too much.”

Rep. Gerald Nadler of Manhattan said Ahmadinejad’s “calling for the destruction of Israel and its people is genocide and unspeakable. He has said countless, absurd lies against the Jewish people. When tyrants threaten mass murder, their words must be taken seriously. … He must not be allowed to incite violence with impunity.”

City Council Speaker Christine Quinn cited a list of things she said make Ahmadinejad unwelcome in the city, including his “expressed anti-Semitic views and doubts about the Holocaust,” Iran’s discrimination against women and its imprisonment without trial of dissidents.

“The threat of a nuclear-armed Iran is not just an Israeli problem but a global problem which the world must address immediately,” she said.

Rep. Carolyn Maloney (D-Manhattan, Queens, Roosevelt Island) pointed out that an Iranian vice president admitted lying to international inspectors about its nuclear program. And of Ahmadinejad’s speech at the UN, she said he “has no business being in that building.”