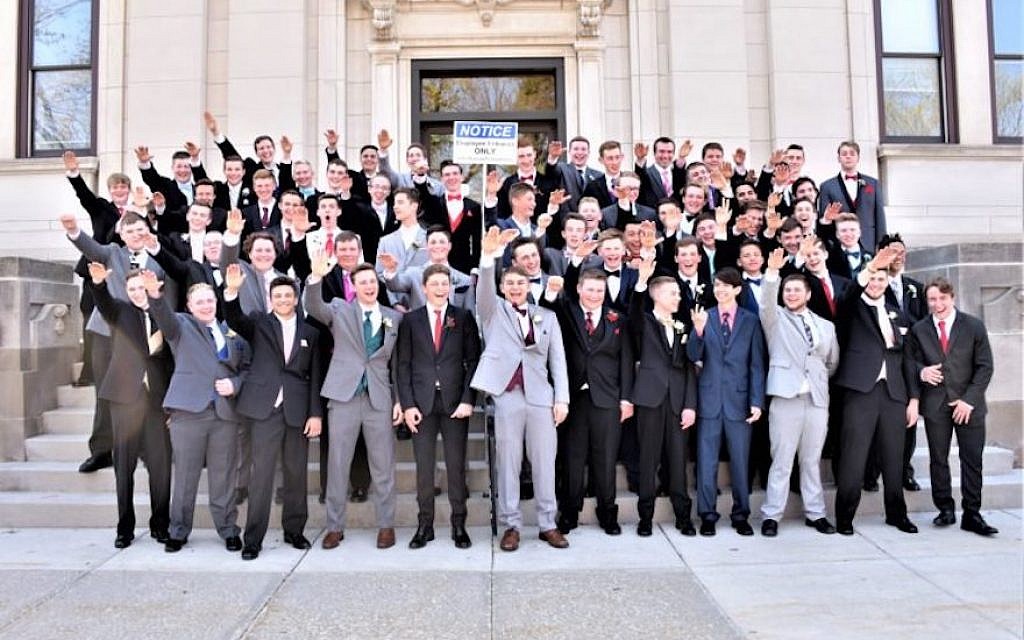 We don’t know what was in the hearts and minds of the boys at a Baraboo, Wis., high school who — with silly grins on their faces — offered a Nazi salute in a pre-prom picture that quickly went viral on social media. (Full story here.) Maybe it was just a stupid prank by teenagers carried away by the moment and clueless about the pain their actions caused.

What we do know is this: At the very least, the incident and its aftermath demonstrate a dangerous lack of knowledge on the part of the students and a shameful failure of an education system that has not taught a critical lesson of our recent history. That lesson is that expressions of hate — by speech or odious gesture — can have consequences. Often, terrible consequences.

And it points to some dangerously mixed messages from local authorities, who insisted that free speech considerations precluded punishment of the boys.

Yes, offering a Nazi salute may not be a criminal offense. But when the Baraboo School District administrator said that “because of students’ First Amendment rights, the district is not in a position to punish the students for their actions,” authorities signaled that such actions are no more worthy of strong and unambiguous corrective action than toilet-papering a teacher’s house.

This week’s New York Times headline broadcast a message stronger than local officials’ expressions of disapproval: “Students Who Made Apparent Nazi Salute in Photo Won’t Be Punished”. For a Jewish community that remains committed to maintaining the historical record, the Baraboo incident should be a wake-up call on several levels.

More than seven decades after the liberation of Hitler’s death camps, the Holocaust is fading into the mists of history for most Americans. The survivor community is a mere remnant; to many Americans, the Jewish community’s cries of “never again” sound indistinguishable from the calls to remember other communities with tragic pasts.

It’s hardly surprising that in a population increasingly unable to even identify the combatant nations in World War II, knowledge of the most horrific element of that war — the Holocaust — is evaporating.

A survey by the Conference on Jewish Material Claims Against Germany earlier this year revealed that 66 percent of millennials and 41 percent of the broader American population don’t know what Auschwitz is. This, despite the museums, memorials and curricula devoted to the subject.

It is possible the boys in the picture did not fully understand the odious gesture they were making — a clear indictment of an education system that has failed in its responsibility to teach our students the lessons of the past. But the Baraboo incident may also reflect the accelerating erosion of constraints about hate speech in a raging, angry nation.

There’s nothing to indicate the boys at Baraboo High School subscribed to neo-Nazi ideology, but the fact so many found nothing wrong with the most hateful of gestures may reflect our growing tolerance of intolerance. Talk show hosts, entertainers and politicians feel freer today to express bigoted views and to use racist, xenophobic and anti-Semitic dog whistles than any time since the civil rights movement of the 1960s. It is not unreasonable, then, to link that growing acceptability to the rise in hate crimes directed at many vulnerable communities, including our own.

Free speech is a critical pillar of American democracy, but authorities must not hide behind the First Amendment when confronting overt hate speech, especially not in our schools. We urge Baraboo community leaders to follow through on their promises of more education and guidance for their students, and make clear to students and the community at large that expressions of rank hate — such as the Nazi salute —will have consequences, not mere wrist slaps. And we hope that responsible leaders in politics, media and the entertainment industry step back from a growing acceptance of angry, intolerant speech.