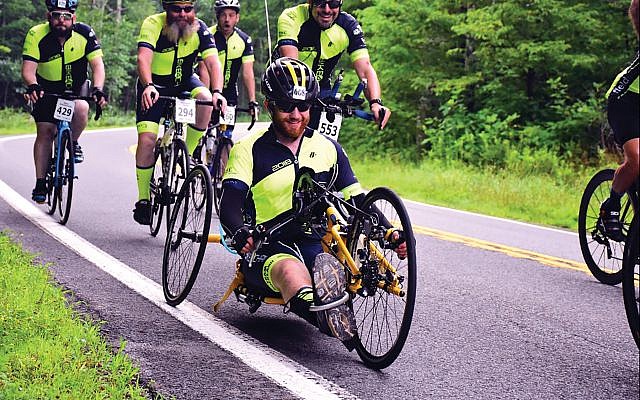 J.J. Eizik on the road in his hand-bike. The above-the-knee amputee is a member of the Knight Riders, who raise money for Chai Lifeline. Courtesy of Chai Lifeline

As a kid with cancer, and later as a cook at Camp Simcha in the Catskills, J.J. Eizik would watch with admiration, and appreciation, as a throng of cyclists rode into camp one afternoon each summer at the end of a long fundraising event. And he witnessed the number of participants rise each year, from barely a dozen to a few hundred.

“Maybe I could do this,” he thought.

Now, a decade later, Eizik, 28, will take part in the race — “Bike4Chai” — for the fifth time. On a custom-made, 20-pound, aluminum-alloy hand-bike that he, an above-the-knee amputee, pedals with his arms.

“I’m doing great, thank God,” says Eizik, a resident of upstate Monsey who has been in remission from osteosarcoma for five years.

He will be part of a 14-member Knight Riders team of men with various disabilities who will take part in this year’s Chai Lifeline 180-mile, two-day bikeathon on Aug. 14-15. A separate, 100-mile “Tour de Simcha” women’s race will be held July 15-16. Eizik raises the $5,000 entry fee from friends, family and “extended family.”

The race, which starts in Princeton, N.J., and is marking its 10th anniversary, has grown into Chai Lifeline’s most successful fundraising activity, bringing in about $10 million of the nonprofit’s annual $28 million budget.

The event is not competitive and riders aren’t timed. “It’s a ride, not a race,” says Yoel Margolese, race director, who calls it the highest per capita fundraising bike ride in the country.

Camp Simcha and Camp Simcha Special are the flagship programs of Chai Lifeline (chailifeline.org), which sponsors a range of year-round services for children battling serious illnesses and their families, at no charge.

The race grew out of a camp counselor’s desire to bring his bike to camp on a Camp Simcha bus; rebuffed, he asked if he could ride his bike to camp from his home in New Jersey, some 180 miles away. He asked for sponsors for his trek, the money to go to the camp.

Some Chai Lifeline staffers saw potential in this for a larger fundraiser, says Rabbi Simcha Scholar, the organization’s founder. “I thought they were crazy,” says the rabbi, but he gave permission. The idea caught on; the ride includes worship minyans, a Daf Yomi session, a barbeque and a midway night at a hotel.

Now some 500 men, and 250 women, participate each year, with a long waiting list, says Rabbi Scholar.

The starting times of the cyclists on the second day are arranged so all can finish, at the camp, to a joyous reception, at roughly the same time.

“It’s a day of inspiration for the camp,” the rabbi says – the campers and their families see so many people giving their time and support.

Eizik says he is the only former Camp Simcha camper with a prosthetic leg who now enters the race.

“I try to give to the camp and give to the campers,” says Eizik, who is now a sous-chef at Nobo Wine & Grill, a kosher restaurant in Teaneck, N.J. “The camp did so much for me.”