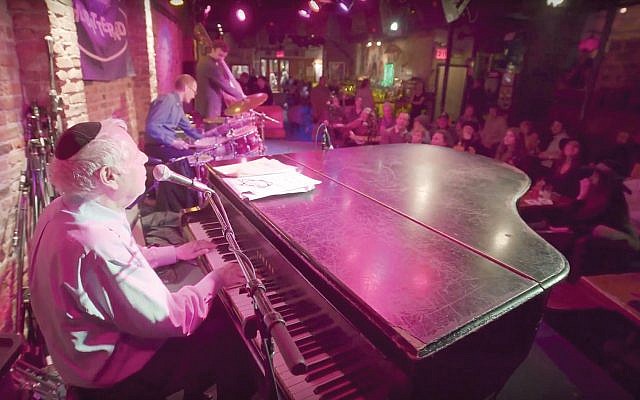 Jazz pianist Don Glaser, with kipa, at recent gig in the Bitter End in Greenwich Village.

There’s a story there too, one that stretches back 70-odd years.

“I started when I was 4 years old,” the 77-year-old jazz musician admitted in a telephone interview this week just after one of his regular trio gigs at Jules Bistro in Greenwich Village. “My parents realized I was musical when I would hear a song on the radio and go over to the piano and pick it out by ear.”

Fortunately, they were neither surprised nor dismayed because Glaser grew up surrounded by music in wide variety. His father played violin, his mother piano.

“There was always music around our house,” he said proudly. It might have seemed inevitable that he would end up a musician, but he really ended up a lawyer and pursued jazz as a second (and secondary) career.

Things might have turned out differently. After his second year at Stanford, Glaser met Ned Tannen, later one of the heads of the powerful agency MCA, but then Ella Fitzgerald’s agent. Tannen offered to take the young man on as a client but warned him he’d have to quit school and devote himself to music full-time.

In that latter capacity, he has a gifted vis-à-vis in his wife Carol Glaser, a clinical psychologist who has performed with his trio on numerous occasions. (The couple lives in Teaneck, N.J.) Like her husband, she grew up in a musical household, but in the Bronx, with frequent visits to the Yiddish theaters of Second Avenue.

“My father’s whole family used to sing madrigals and spirituals; my uncle was a cantor and my aunt performed in the original U.S. production of ‘Carmina Burana,’” she recounted. “In college I performed with a folk singing group.”

The other running theme in their lives from childhood to the present was strong ties to the Jewish world, albeit slightly complicated ones. Don’s family connections to San Diego date back far enough that on his father’s side of the family were founders of the first Orthodox congregation in the city, while his maternal relatives founded the first Reform congregation.

“There were only three rabbis in San Diego when I was growing up,” he said with a laugh. “I had strong ties to the Orthodox rabbi even though I was raised in Reform.”

By contrast, Carol had both yeshiva and secular education. “I grew up in shteiblach,” she said.

The result was that when their four daughters were growing up, they were sent to the local Orthodox day school, and when the family moved to nearby La Jolla, Don and Carol were instrumental in founding Adat Yeshurun, an Orthodox congregation.

Glaser is something of an oddity in the jazz world in one respect. He’s likely one of the few jazz pianists who wears a kipa on the bandstand. He recalls playing a gig in Paris many years ago at which a music lover from Beverly Hills approached him between sets to ask, “Are you really Orthodox? I can’t believe you’re Orthodox and you’re playing … jazz.”

Believe it. He’s been doing both for a long time.