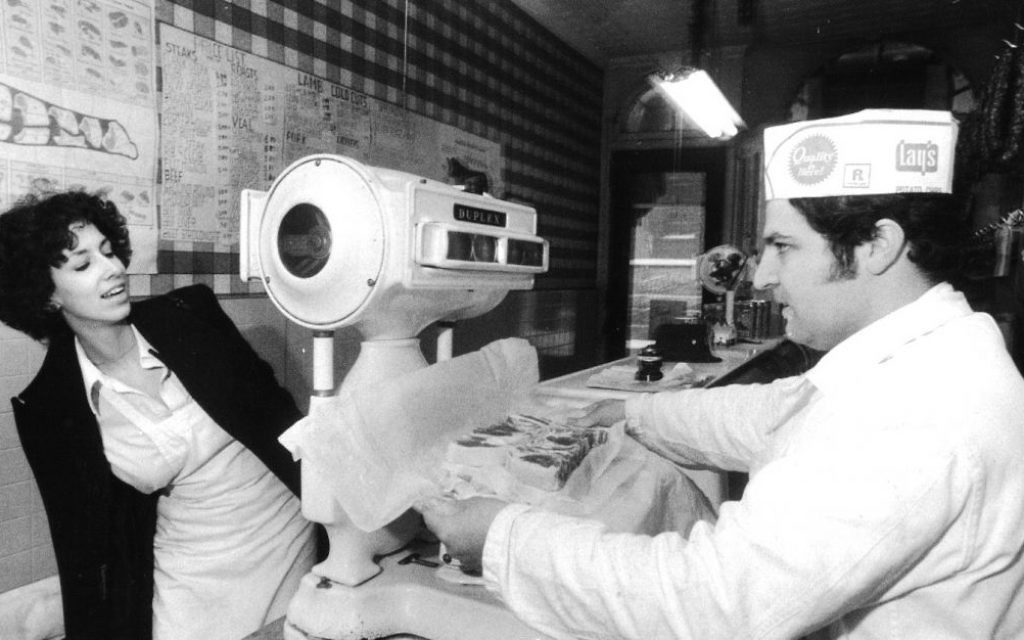 Nothing could have prepared me for the moment when I opened the freezer in the basement kitchen of Gracie Mansion in January 1978. Inside was a white paper package of marked “flanken,” neatly identified with a magic marker.

It had once belonged to Mary Beame, wife of New York’s first Jewish mayor, Abe Beame, whose tenure ran from 1974 to 1977.

Not sure what could have spurred this prominent Jewish family to depart so quickly that it left behind such culinary jewels as chicken necks and giblets, and a few choice rib steaks, I had to smile. This memorable freezer image was a signpost of not only the New York Jewish experience, but a possible foreshadowing of my life to come.

I was 24 when I moved into Gracie Mansion as executive chef for Ed Koch. My boss-to-be had just become the mayor of New York City. Previously, I had done a cooking stint with former Mayor Robert Wagner at his law firm and it was he who recommended me to Ed. The new mayor, with no wife in sight, would no doubt need someone to prepare his meals and entertain his special guests. In that capacity I lived in the basement of the big white house and woke up at 5 a.m. every day to squeeze Hizzoner’s grapefruit juice and sometimes scramble a few eggs. I spent the rest of the day shopping, prepping and cooking dinner.

Sometimes I prepared an intimate meal for the mayor and a handful of colleagues; other times I organized a big bash for political cronies, prepared for the arrival of President Jimmy Carter (I made a peanut cheesecake and put it next to his bed), or helped blowtorch the kitchen to kasher it for Prime Minister Menachem Begin and his Israeli entourage around the time of the Camp David peace agreements.

But the immediate thought that first day was, what to do with the stuff in the freezer? Knowing that chicken backs made wonderful stock and that flanken’s voluptuous fibers could, with proper simmering, melt in your mouth, I made a kind of Jewish pot-au-feu and added some carrots and leeks to a stock pot.

The first (and only) Jewish Miss America, Bess Meyerson, spent a lot of time in that kitchen in the early days, sometimes prickly at the notion that she wasn’t Ed’s only “woman” at a time when his sexuality was under scrutiny by the media and rival politicians.

I loved and respected the mayor too much to ever consider betraying any confidence or private moment. But I don’t think he would mind my sharing my fondness for him. Although there were awkward moments in the morning, of me in an apron-clad bathrobe, and him sitting at the kitchen table in Mary Beame’s palm-tree wallpapered breakfast nook, he was kinder than his famous ego would have suggested, and always supportive. Once when he came home for dinner with 14 guests (10 more than promised), he called me into the dining room to take a bow. “What kind of veal was that?” the mayor asked in front of his satisfied companions. “Chicken,” I sheepishly responded. “Wow, Rozanne. You make me look a genius: A mayor saving the city money,” he said.

Gracie Mansion, in the beginning, was a bit sad and lonely for both of us. We would sometimes spend the weekend together (each in our own quarters — a kind of urban Downton Abbey) or listen to Linda Ronstadt records and chat about his pal Jerry Brown. At night, I would leave a snack for him in the refrigerator in the kitchen. He loved my chocolate mousse and meringue cookies and would often refer to that special dish of chicken-masquerading-as-veal.

And then there was the mayor’s first Passover seder to deal with. As I had never fully prepared a seder until then, I called everyone I knew, including my mother, who made very delicious but extremely hard matzah balls. My family loved them, but I doubted the mayor’s family would. What to do? I asked the mayor for his recipe. He suggested putting seltzer in the mixture, telling me that would make them light and fluffy. I immediately called my mother to share the good news.

The seder was held on April 21, 1978, for 15 guests in the dining room just off the kitchen. We began with crudités with curry dip and kosher rumaki. I made chopped liver and served it with plum tomatoes. Light and fluffy matzah ball soup came next, followed by My Mother’s Pot Roast (made with caramelized onions that were half the net weight of meat, dry vermouth and bay leaf), roasted potatoes, homemade tzimmes, string beans, and matzah kugel. There wasn’t enough time (or even a tube pan) to make a proper sponge cake and so I bought one and topped it with macerated strawberries. Macaroons and Passover candy were served with the coffee.

My life as a young women executive chef at Gracie Mansion, living in the basement and making $200 a week, made an interesting tale back then; but it was also really my coming-of-age as a Jew. Ed himself was clearly dedicated to Israel, and there was that unforgettable weekend when Prime Minister and Aliza Begin were our guests. We threw the world’s largest coffee klatch, as more than 900 people came to visit the mayor and the Begins during their three-day stay. One morning Mrs. Begin told me to “sleep in” and that she would make breakfast. That was a turning point for me. Not only did I enjoy the shakshuka-style eggs she prepared for the six of us (including the mayor, the PM, and his chief of staff Yechiel Kadishai), I decided then and there it was time for me to make my first trip to Israel.

Long after I left the mansion, Mrs. Begin and I remained friends, and Kadishai is still part of my family’s close-knit circle. He came to my wedding (the first one held at the Rainbow Room, which my groom’s company had just re-opened), and then later joined us at Windows on the World when I was honored by the Jewish National Fund for “pioneering efforts” in promoting the food and wine industry of Israel. In that capacity, I became Israel’s unofficial spokesperson for more than two decades.

Because of that extraordinary time as a young woman searching for her identity, I have taken countless trips to Israel, gone on a mission as one of “Four Women Chefs for Peace,” and served as a board member of the American Friends of Assaf Harofeh Medical Center for almost 20 years.

I still add seltzer to my matzah balls, and also, among many other activities, run a satellite kitchen at the urging of Rabbi Andy Bachman at Congregation Beth Elohim in Park Slope, Brooklyn, for the victims of Hurricane Sandy. To date we have served more than 38,000 meals.

And to think it all started with a package of flanken in a young chef’s life.

Rozanne Gold is a four-time James Beard Award-winning chef and author of 12 cookbooks.